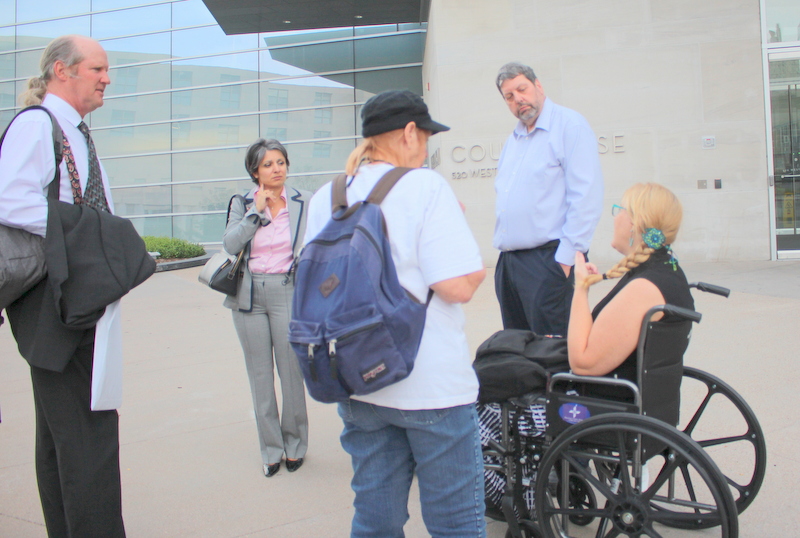 Mark Iannicelli (standing on right) stands with supporters and responds to a guilty verdict after his trial.

In a case that uncovered the use of “Shadow Officers” by the Denver Police Department, an activist who participated in a Million Mask March in November was found guilty this evening of “Interference” with a police officer.

Mark Iannicelli told a 6-member jury that the march which sought to expose issues of homelessness, racism, inequality and police brutality, was descended upon by police on motorcycles.

The jury, four of whom said that they were associated with law enforcement including a former police officer, found Iannicelli guilty after deliberating for one hour.  One juror spoke to spectators after the verdict and said that in the video used as evidence the defendant appeared to be in a position “that looked like he was about to strike the officer.”

Caryn Sadaro, a courtroom observer said that the prosecution failed to prove its case partially because of the juror’s interpretation of the video footage, “We talked to one of the jurors after the verdict and this juror said ‘because his arms were up like this, like he was about to make a motion.’  And then she was asked if they convicted because she saw a push or something, and the juror said, ‘no we didn’t see that.’  His whole conviction was pushing the officer and interfering, and the juror admitted that they didn’t see that.  He should have been found ‘not guilty’ by reasonable doubt.  If you didn’t see the push or know that he pushed, which they didn’t, then that’s reasonable doubt and it was the wrong verdict.”

An earlier trial of another activist at the same march, Selayna Bechtold was dismissed after video footage was viewed by prosecutors which corroborated Bechtold’s account that she was standing in a public space and not in a roadway, the allegation for which she was charged.

A Colorado Opens Records Act request to the Denver Police Department listed the deployment of 27 undercover “Shadow Team” officers to monitor the march of about 70 protesters which Commanding Officer Patrick Phelan verified on the stand to have employed.

Defense attorney Katayoun Donnelly told The Nation Report that the defense will file an appeal in the morning.