DENVER – On the day before an International Boycott the Palm Restaurant action was to take place, the corporate offices of the restaurant chain posted on their Facebook page a letter they said they will submit on Monday both to the Denver City Council and to Denver Mayor Michael Hancock.  The Palm Restaurant is calling for a repeal of the Urban Camping Ban.  The Ban was highly contested by the Denver community who turned out in numbers to voice their opposition at the May 14, 2012 Denver City Council meeting when the measure was passed.   Still the City Council approved the Ban on a 9-4 vote which rendered illegal for persons in Denver to sleep anywhere on public or private property while using any form of protection including a blanket, plastic, or cardboard.   After the vote, City Council member Susan Shepherd who voted against the Ban told community members that they were more powerful than they realized, “You have the power to hold the proponents of this bill and this city accountable.  You also have the power of your vote.” 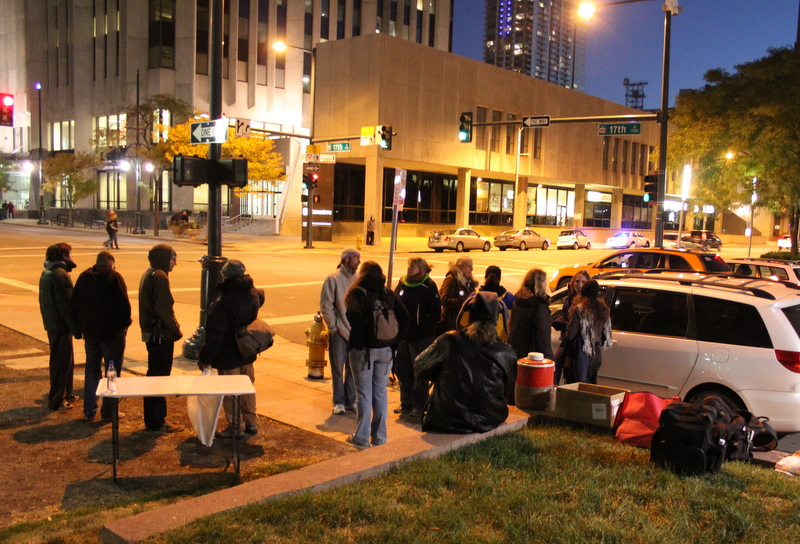 Advocates of the Denver homeless community serve dinner to those who pass by outside of the Palm Restaurant. Photos: Tiburcia Vidal/The Nation Report

Occupy Denver began weekly protests outside of the Snooze Eatery days before the final Council vote in response to earlier testimony by owners of the Snooze in support of the Ban.  They were joined by other homeless advocates until eleven months later, on April 5, 2013 Snooze owners announced a reverse position to the ordinance.  Immediately following this change in position, homeless advocates turned their attention to the Palm Restaurant located in the Westin Hotel in downtown Denver.  The restaurant’s sales manager Wendy Klein had months earlier testified to City Council in support of the Urban Camping Ban, “Our guests are afraid to go out [to the patio] after dark” citing different incidents of verbal and physical confrontations outside of the restaurant but failing to positively identify any of the accused in her testimony. 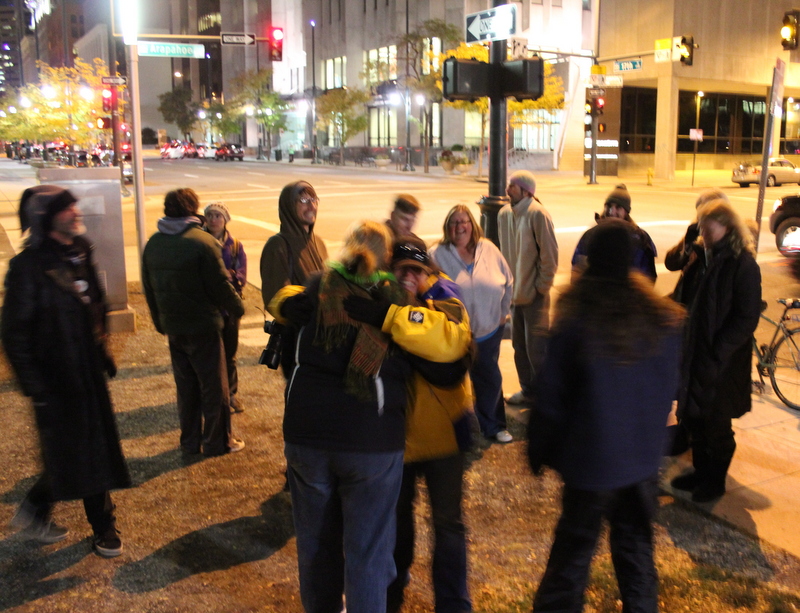 It had been more than five months that weekly protests have taken place outside of the Palm Restaurant every Friday evening beginning at 5 p.m.  Occupy Denver, Move-On, Denver Homeless Out Loud, the Colorado Foreclosure Resistance Coalition, and an international coalition of groups had joined together to protest against the restaurant and for the rights of the homeless community.  During those five months Palm Restaurant Management arranged for police officers to stage outside of the restaurant leading to reports of abuse documented by protesters at the quarterly Citizen Oversight Board public forum on September 19, 2013.  At different times during those five months there were several arrests of protesters as they were leaving the protest and several tickets issued to protesters for jaywalking.  There were also complaints by protesters who say that police followed them and verbally and physically harassed them on their way home.   Protesters say that they will fight all charges because their First Amendment rights to free speech and to assemble had been repeatedly violated by the Denver Police. 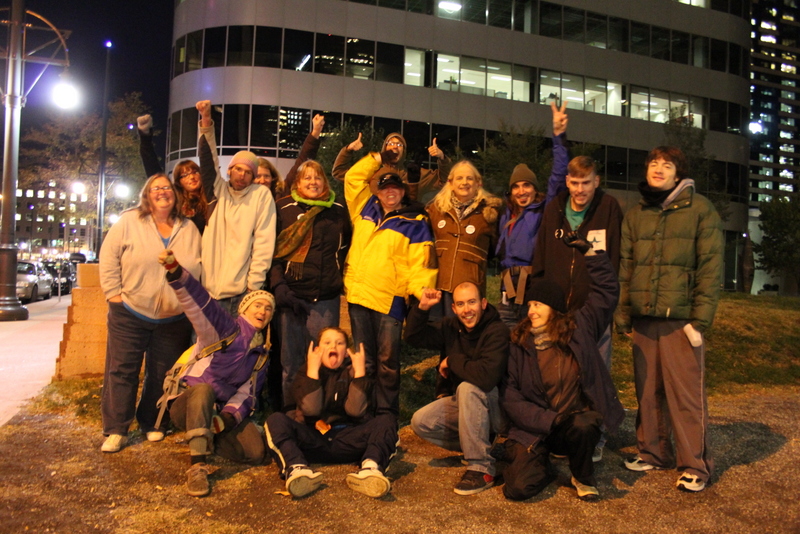 On October 19, 2013 an International Boycott the Palm protest was planned to take place in five different cities across the U.S. and in London.  Chicago groups joined the coalition as late as Thursday and Mexico City groups were expected to follow suit.  But it was the executive Vice-President of the Palm Restaurant Group, Bruce Bozzi Jr. whose ancestors founded the Palm Restaurants who acted on behalf of the chain to offer his support of the Denver homeless community.  In his response, he said that he was unaware of the Urban Camping Ban and the role that his Denver restaurant had played in the passing of the Ban.  He further explained that his New York restaurant runs a program that regularly provides food that is served to those who need it.  In his letter he cites disappointment that the Ban has failed to accomplish what proponents claimed that it would, “ Since the Ban became law in May 2012, service providers have failed to meet the overwhelming need for safe places to sleep. The stated goals of the Ban included improving the business climate and appearance of central downtown areas; police being able to offer service alternatives that help connect homeless people to healthy alternatives to the street; and improving the quality of life as they move off the streets, into shelters, and access needed services.  We believe the Ban should be amended or repealed to more effectively meet the needs of our homeless community. We urge immediate action to help the homeless community of Denver, for example, dialogue between city officials and the homeless commissions, advocacy groups and homeless people themselves.” 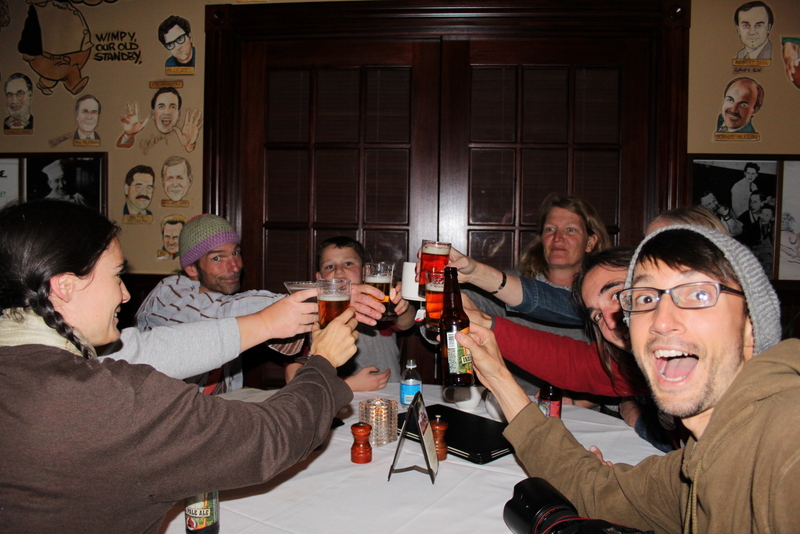 Protesters told Vice-President of the Palm Restaurant Group Bruce Bozzi Jr. that they would celebrate inside of his restaurant after receiving his support to repeal the Urban Camping Ban.

Organizers of the now-cancelled International Boycott say that inclusion of advocacy groups and members of the homeless community is vital to reaching viable solutions to the needs of all involved parties.  They say that this component has been missing in the past, citing a July 9, 2013 City Council meeting which allowed for police comment about the Ban but not from homeless advocates or from those who are homeless.

Tonight though, those who said they had shown up every Friday night to support the homeless community counted today as a victory in their struggle to repeal the Urban Camping Ban.  Darren O’Connor who has worked to repeal the Ban said tonight of his communication with Palm owners, “[Palm management] said, ‘this is clearly not working and something else needs to be done.’  People should be able to use a blanket in the Mile High City.”

Twelve year-old William of Denver who had spent multiple Friday nights at the weekly boycott outside of the Palm Restaurant said of tonight’s news, “This is a restaurant that goes all across the country and all across the world.  I think a few more restaurants and we’ll ban this Urban Camping Ban.  I mean it’s great.  I feel like a sports player who just got a win.”