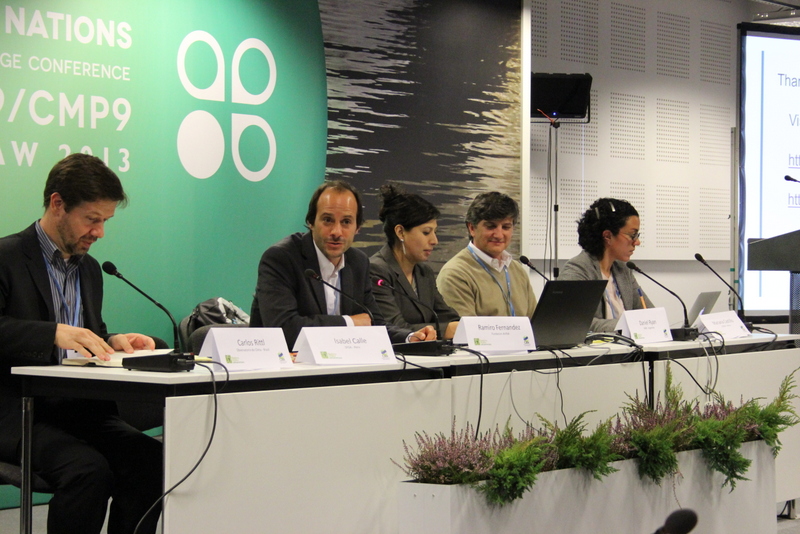 WARSAW-In a country that is heavily dependent on coal without immediate plans to change that path, the United Nations 19th Conference of the Parties began on Monday.  Twenty-thousand people are expected to descend on the capital of Poland, Warsaw, where 1.5 million people make their homes.  The first week has been lower-key than previous conferences.  Missing are the massive protests of Copenhagen in 2009, the mock COP conference that was staged in Cancun in 2010, and the multiple street theaters in Durban in 2011.

Maintaining a consistent presence though are the environmentalists of Latin America, many of whom say they are taking significant measures to protect their natural resources.  Along those lines, the people of Cajamarca, Peru have been fighting the mining of gold  in the pristine mountains surrounding their city.  Isabel Calle is the Director of the Policy Program of the Peruvian Society for Environmental Law.  She presented on Wednesday about the mining issue in Cajamarca and how the water discarded from the mining industry will contaminate glacial melt, “Glacial waters are also crucial to electricity generation through hydropower.  Water scarcity and conflict will be exacerbated by water contamination particularly through the mining industry.”

The Alliance for Global Justice-AFGJ- Eco Solidarity Project of Arizona and the Denver Justice and Peace Committee-DJPC are very familiar with the struggle as they have worked in solidarity with the people of Peru to stop the Conga mining project.  Both groups report having members who have traveled to the troubled region to investigate how best to proceed according to what the local people want. It was during the early stages of these investigations that it was discovered that Newmont Mining which has purchased mining concessions, was actually based in Denver.

Isabel Calle told The Nation Report about the opposition to Newmont’s mining and where the process stands now, “The problem is related to mining called Conga.  That is a very expensive project for this company.  The problem is that the people [don’t] want the mining here because they are a little worried about the impact of the actions of the mining in the water.  Why? Because in the environmental impact assessment that [Newmont did] they said that they are going to destroy four lakes. So people [don’t] want it because the water is very important for agriculture and tourists.  The problems are very hard between [the] people and [the]company.  The company decided to stop the project.  The government decided to contract a tree expert to review the environmental impact assessment and see if it’s ok.  They decided that many things [have] to change in things related to quality and quantity [of] water.  So the project is stopped.  Now the company is constructing two reservoirs [for] the people but the people [don’t] want the mining.  So it’s a strange [relationship between them].  I think the people are very strong.  The regional president of this state is against the mining.  He’s very [influential] in this region.

The mining [company] has to improve their conduct in Peru.”

Environmentalist from Argentina, Brazil , Mexico, and Peru represented Latin America’s position in the panel presentation.  On Wednesday at least forty-eight Least Developed Countries-LDC who are members of the Conference have just released their National Adaptation Program of Action.  The plan outlines what they need in support to resist and recover from climate change activity after they have been affected by drought and flood.