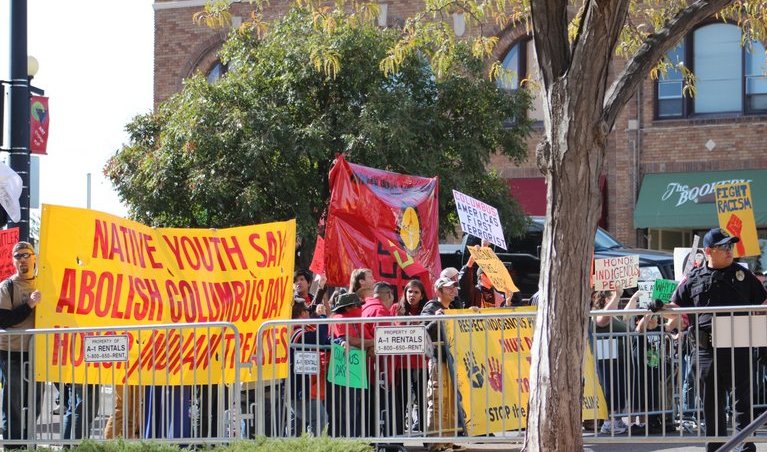 Those who want to abolish Columbus Day chant “No more Columbus Day” outside of a Columbus Day celebration in Pueblo, Colorado on October 8, 2012. (all photos: The Nation Report)

Though it’s not expected to make it to the governor’s desk for a signature this year, those supporting House Bill 17-1327 “Repeal Columbus Day As State Legal Holiday” left the State House elated, not only that the bill passed 6-3, but that the conversation continued for another year.

The bill, sponsored by Representative Joe Salazar was introduced earlier this month and was brought before the House State Veterans and Military Affairs Committee on Wednesday.  Although the vote passed on a party-line vote, Representative Mike Foote a Democrat from Boulder County supported the bill this year as opposed to last year when he voted against the measure, “History is written by those who conquer.  I wasn’t taught in school the history of what happened to our Indigenous communities.  It didn’t occur to me the harm that was caused.  That harm continues today.  I would love to see the Italian community reach out and try to recognize that Indigenous people were harmed.”

That harm was outlined by those who have experience with historical trauma and the Post Traumatic Stress Syndrome (PTSD) experienced especially by Indigenous children.  Nancy Clark is a traditional pediatric practitioner as well as a traditional Apache healer who grew up in Pueblo, Colorado where Columbus Day was first celebrated after Colorado became the first state in the nation to adopt Columbus Day as a state holiday.  Clark testified that her offices see 500 cases a year of Native American children 92% of whom are experiencing some form of trauma or PTSD, “When they hear or talk about their experiences in school and are forced to speak to their classrooms about why they have long hair when they are the only child who’s native in a school of 500 children.” 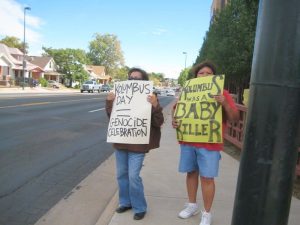 Columbus Day is one of ten legal holidays in Colorado.  While the bill seeks to repeal Columbus Day as a legal holiday, state employees would be offered a floating holiday in October pending an approval date of the employee’s supervisor.  Several states have removed Columbus Day as a paid holiday for state employees including California and Texas.  Alaska, Oregon, South Dakota, and Vermont do not recognize Columbus Day.  Berkeley, Minneapolis, Seattle, Cambridge, Phoenix and locally Denver and Boulder have adopted Indigenous Peoples’ Day.

Representative Edie Hooton who represents part of Boulder County said that Boulder’s adoption of Indigenous Peoples’ Day went into her strong support of the bill, “[Boulder City Council] agrees to recognize that the city has benefited directly from Indian policies and the breaking of treaties.”  Hooton said that she wanted to make a statement about the history of “heinous violations of human rights.” 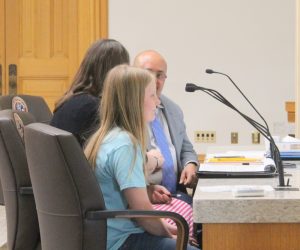 Eleven-year old Winonah Bibens Graham testified with her mother Angela Bibens, an attorney whose ancestors were interned in a prisoner of war camp in Mankato during the Dakota War of 1862 while another was hung to death.  Winona Bibens Graham told the committee, “In my school we don’t celebrate Columbus Day, but many schools do.  One of the reasons I feel that this holiday should be not celebrated is because it tells lies about what Columbus did to the Indigenous people and the students at the schools who are learning this, they are learning that and taking it into their own lives.”