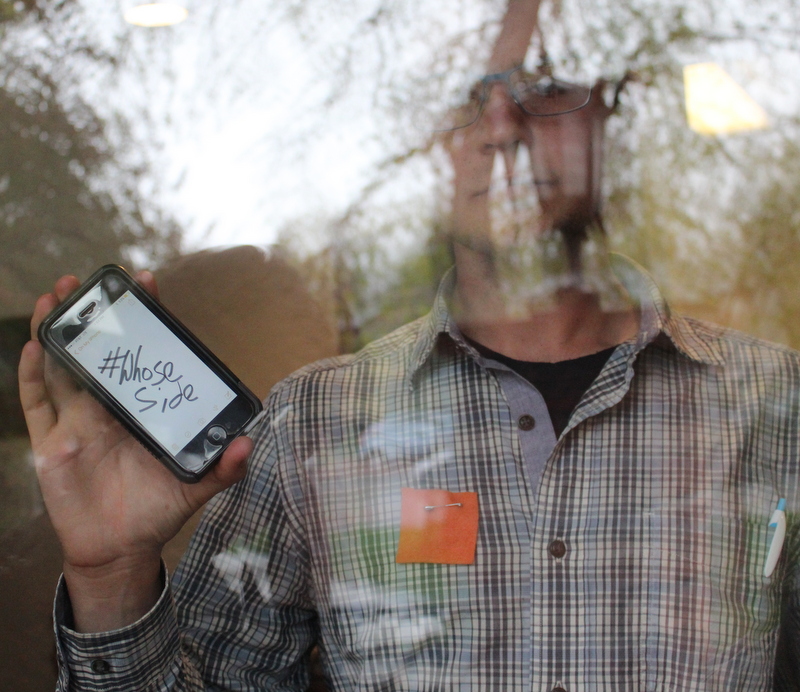 CU Student PD Gantert shows his message to reporters through the glass doors of the Chancellor’s Office. (all photos: The Nation Report)

Through a glass door, students and alumni who have escalated their action from a sit-in at the University of Colorado Boulder’s Old Main building to a take-over of the Chancellor’s office, want Chancellor Phil DiStefano to take a position on fossil fuel divestment from the CU endowment.  Although business is continuing at the Chancellor’s cottage, the building has been locked down and reporters were not allowed inside.

At the time of this report, about ten students were occupying the building, but students come and go depending on their schedules.

PD Gantert made a quick statement to The Nation Report during a brief moment that the doors were open.

“Chancellor DiStefano has been given this opportunity to stand on the right side of history with students.  He instead chose to make a claim of institutional neutrality.  So today students are risking arrest asking him to stand with us amidst the climate crisis.  There are students here who are willing to be arrested waiting for Chancellor DiStefano to pick a side in the climate fight because we know that there is no such thing as neutral.  It’s students or fossil fuel millionaires.”

“We got a statement yesterday and he is saying the same thing he has for four years which is he cannot pick a side and he claims to be neutral and we know that neutrality is a farce.”