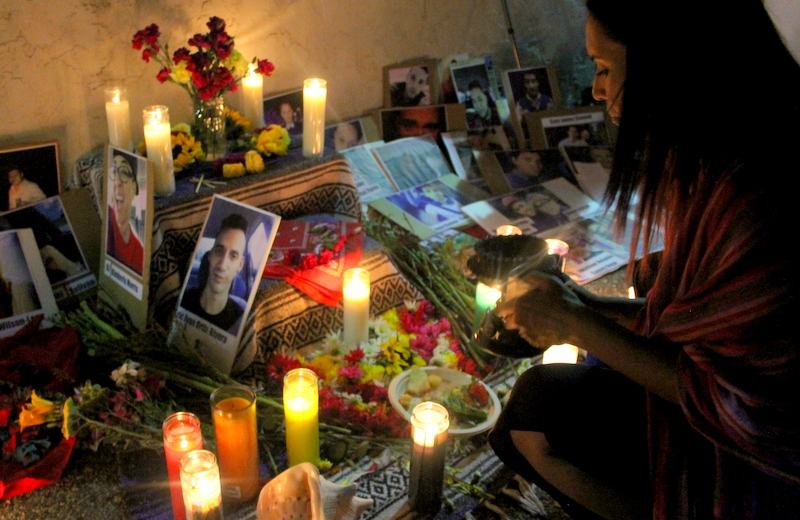 “We are asking community to share in pain, prayers, art, love and vision of
protection and safety.”

There is a disconnect between what the general LGBTQ community experiences and what young queer people of color experience was the main message behind a vigil held Wednesday, June 15, 2016 for the victims of the Orlando massacre last weekend.  Upon attempting to participate in a vigil held at the Tracks gay nightclub held to honor the victims, two carloads of members from the groups Buried Seedz of Resistance (BSEEDZ) and Survivors Organizing for Liberation (SOL) were shocked at the sight of the extent of police presence and were so affected at the sight of people being searched that they turned away from the vigil in anguish.

“The history of queer and trans communal spaces are rooted in acts of
resistance against police brutality and targeted violence by state militarized forces. Police violence continues to be a serious and legitimate concern for LGBTQI people of color. Police violence takes many forms including refusal to take a complaint,
harassment, discrimination, profiling, unjustified arrest, physical assault, entrapment, and sexual violence. We refuse to accept suggestions that increased police presence in our queer and trans spaces will improve risks of violence or increase any sense of safety.”

The two community groups then organized a separate vigil for,

“LGBTQI community, family, allies and relatives that need safer spaces to grieve, act and commit to a renewed sense of urgency to the safety and protection of LGBTQI people of color starting in our own state here in Colorado.”

A wide group of about 100 people from the Indigenous, Latina/Latino, Muslim, LGBTQI, 2spirt and all other community groups that were invited showed to mourn the loss of their community members from Orlando earlier in the week but also to recognize the lives of the 14 trans women of color who have been murdered so far in 2016 alone.

Diana Amaya member of BSEEDZ began the vigil, “We wanted to let everybody know and remind folks that this isn’t an isolated incident, that this has been happening, that we forget the 25 plus transwomen who were murdered last year, the 14 women who have already been murdered this year.   All this is just a part of genocide to our people.”

Last year was the deadliest on record for transgender US residents, with at least 21 trans women killed, but the number does not include those whose deaths were not reported or investigated, nor victims who were misgendered by police and media or simply not recognized as trans women, which trans rights groups say is not uncommon.

Participants marched from the BSEEDZ/SOL office down Tejon and 38th Street to La Raza Park where the space was opened for those who wished to speak.

One person spoke about why the group feels disconnected from the annual Denver Pridefest, “Last year we were seeing our history erased.  It hurts so much to have the largest organizations here that are supposed to hold space for our communities sell out.  The police, Wells Fargo, Walmart, all of these corporations, all of these entities, all of these industries that have exploited our people, exploited all of our generations and we deserve so much better than that.  Not only do we deserve that, our grandparents deserve that, our parents deserve that, and my brothers and sisters and my babies deserve that.  So I ask that if you attend Pride this year, if that’s something you’re going to do, remember that history.”

Two members of the slam poetry team Minor Disturbance Ayla Sullivan and Emery Vela shared a poem that they had just redrafted earlier that day, “We wrote this poem out of a lot of sadness.  I know that violence like this happens so often in our communities.  It’s very important that we acknowledge the sentiments of the people who have passed and recognized that this is still something that is going on.  We’re still fighting.”

change myself if i could

i just wanted to tell you that

i come from a culture that forgets itself

scolding me for my broken spanish

grandma, my inability to speak vietnamese

mom, our colonizers language is central to

a roman catholic faith integral to our family life

we had no time to salvage indigenous traditions in the bloodbath

before our bodies were sinned they were holy

you have twisted spirits into ghosts

my grandmother, the matriarch of self-sacrifice to one’s culture

she forgets the trans shaman who kept her country sacred

a devout wife to a gay man

her homophobia is more than product of a failed marriage

it is an obligation to the colonized version of vietnam

i would change if i could

to the saigon of

the u-s  pawn that demonized buddhism

is it even my right?

spanish, a gendered language leaves no room for the gender variance breathing in our people

put a cross and transgender together and you get transgenero

we are so concerned with proving our trauma with historical evidence, but i’m exhuming a language that cannot be googled, a history too threatening to europeans to survive

my body is a sacred oral history i cannot grasp, a body reaching for rough translations that never seem to fit.

all this identity that cannot fit neatly into english, let alone vietnamese

i have truth in this body that will not translate outwords.

what good is a stolen culture to an assimilating body

i don’t guilt my family for their survival

don’t shame them for succumbing to the erasure

i carry their sacrifice in my stomach like a barbed wire

my family has been conditioned to assimilate for survival

our culture has always affirmed us

my grandfather is the only person i can use as evidence

in a gender variance encyclopedia that isn’t explained by cis doctors telling me how trans people are disgusted by their bodies, medical language to bind us into existence based on study and fascination

and i am learning

my body is humming our culture back to you

Another person said that he identified as 2spirit and has been guilty of forgetting his community since his own transition from a woman to a man.  He said that since then his life has been so much easier that he had forgotten that the same wasn’t true for everyone.

A mother spoke to say that she’s the mom of a trans boy and that the experience is brand new to them, “I’m having a hard time and I’m scared.  I need you to watch out for each other and watch out for my kid.”

One speaker said that she just returned from seeing her brother who identifies as queer graduate from DePaul University in Chicago and as he received his degree on stage, he was rushed off the stage as he raised his fist and yelled, “Orlando.”  “His own institution couldn’t protect him at that time.”

In the procession back, the group held candles along with the pictures of the Orlando victims while reading each of their names.  Cars slowed and honked in support.

BSEEDZ member Ananas invited the crowd to break the fast during the season of Ramadan by sharing a bowl of dates with others.  The shooter at the Pulse nightclub in Orlando was identified as Muslim, so mourners wanted to ward off the impulse in some communities to blame those of the Muslim community for violence.

“We know Islamophobia and homophobia as the same monster known by different names. We recognize and honor queer and trans Muslims as a part of our community. Islamophobic sentiments in light of the events in Orlando situates
Muslims in our community as vulnerable to heightened acts of violence.  The heightened anger and fear towards Muslim individuals and communities erases the lived realities of queer & trans Muslims. We know our liberation to be bound with that of our Muslim brothers and sisters.”

BSEEDZ and SOL maintain support for LGBTQ communities who experience violence and are marking 30 years of hosting a crisis hotline.  That number is 1-888-557-4441.

They have expanded the hotline services to include those who are experiencing acts of violence through Islamophobia in addition to any variety of violence.  Other organizations who offer similar support are: 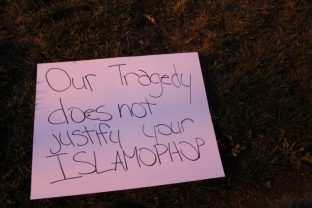 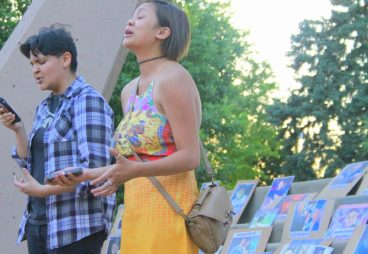 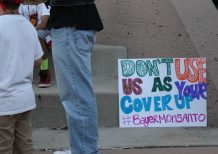 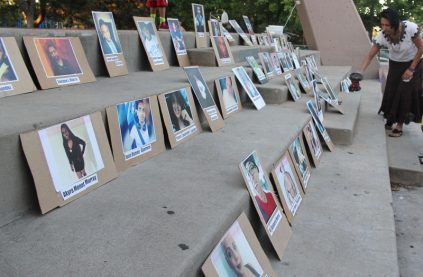 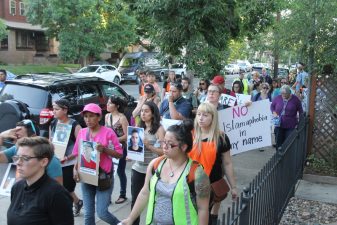 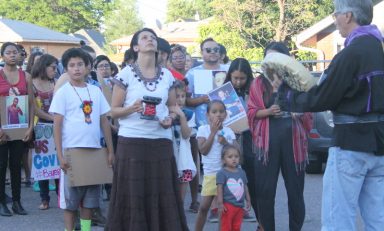 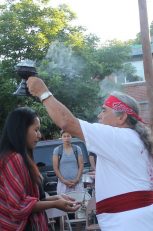 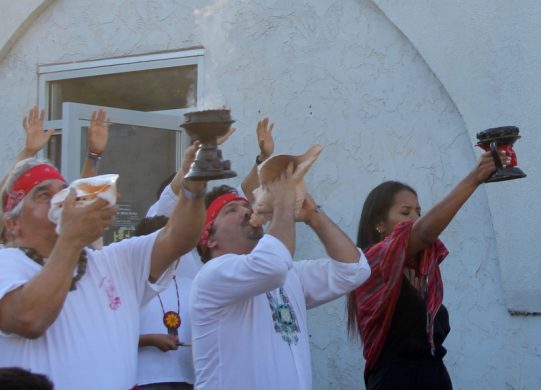