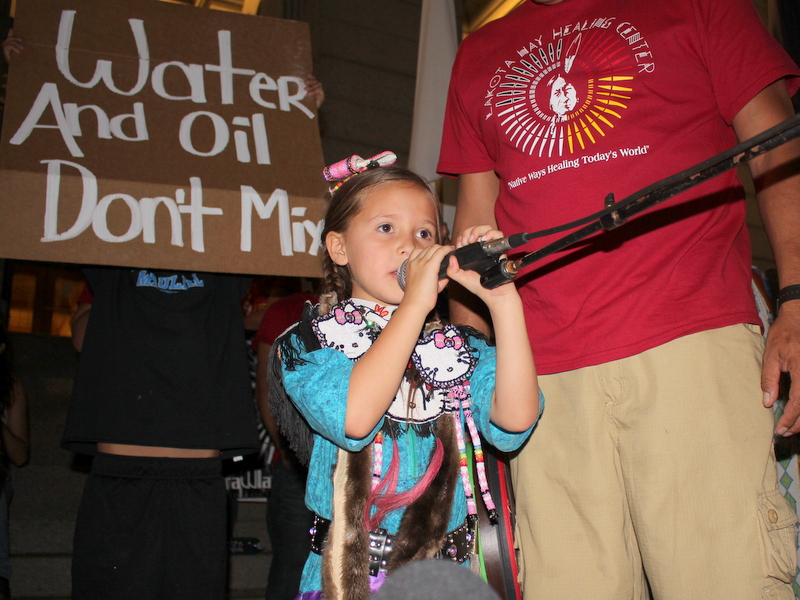 “I haven’t seen a crowd this big since 1966,” spoke elder John Zamora to a crowd of about 2,500 at the west steps of Denver’s state capitol Thursday evening, “I stood on these very steps in 1966 saying the same prayer to the Creator.”

“As Grandpa Sitting Bull said, ‘Let us put our hearts and our minds together to see what life we can make for our children.”

“Remember, we’re living in our children’s past.  They’re going to look back from their future and they’re going to see you.  So do everything in the most proper way you can for them because it’s for them that we’re dong this.”

Those were the words of four different speakers at the Four Directions All Nations March that met at the Colorado state capitol on Thursday evening.

The Four Directions All Nations March was organized to show solidarity with the front-line defenders who are protecting the water supply of the US Midwest that depends on the Missouri River.  The Missouri River, the longest in the US, originates in Montana and touches twelve states in total after it joins the Mississippi River and eventually streams into the Gulf of Mexico.  An encampment near Cannonball, North Dakota has been established since April of this year to stand against the construction of the Dakota Access Pipeline.  The $3.8 billion Dakota Access Pipeline project is already under construction to carry Bakken crude oil to refineries in Illinois. 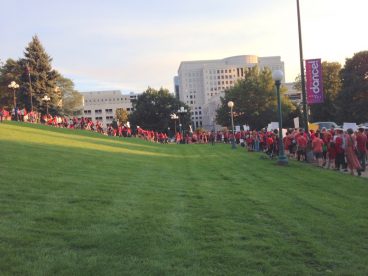 Speakers from Canadian and Mexican tribal nations as well as from First Nations across the US took turns at the podium led by the elders in a gesture of respect for older generations.  Eighty-year old Ricardo Romero of Greeley is a former political prisoner, “The power of people is the most amazing power that exists.  We have to steadily attack corporate greed.  We have to destroy the concept that money is a god.  That is not our god.”

Robert Cross, a local elder had been to the Standing Rock Camp to “see for myself.”  He shared a story passed onto him by his great-grandfather, “When he was fighting in the greasy grass, when all those cavalry men, those invaders were coming, he said, ‘we fought em with guns, we fought em with weapons, but they didn’t run.  They still kept coming.  So one of our leaders, Crazy Horse told us to grab our whistles.  So we all grabbed our eagle bone whistles.  As we were charging those white men, we blew those eagle bone whistles.  That prayer was so strong, it scattered them.  It scattered all of them.’  So I believe if all those warriors up there had those eagle bone whistles and they blew them all at the same time, it would scatter those workers up there.  It would show those people that we really mean business like our ancestors did.”

Laura Naranjo (Southern Ute) is a local healer who had also been to the Sacred Stone Camp, “We have the National Guard in Standing Rock who try to do things like block the road.  And they try to get a reaction and a response from us that looks like them.  But we pray through those moments.  Laura Naranjo sings:

Majo Mana (Hopi-Dine) whose people originated in the Four Corners area acknowledged the wide variety of people who came to show support,  “Thank you for taking part in prayer with us and respecting those ways.  You’re acknowledging that you’re on native land and [you’re] checking your privilege with how much water sustains us all.  The four of us have come together.  We come from different nations, different backgrounds.  We were up there this Labor Day weekend, and we saw some crazy stuff, some things that disturbed our spirits, things that were really hard to take in that was nothing new to us, but seeing it with our own eyes was a different thing.  We decided we were going to bring that energy back to organize here in Denver.

Tessa Maclean (Anishinaabe from Canada) had been to the Standing Rock Camp and had just returned, “We were in North Dakota when they unleashed the dogs.  We were at the front lines when we watched our women take those barriers down and we watched our women march against those dogs and those private security forces.  It was a call that we need to protect our people, protect our water, protect life.  This movement in Standing Rock is a revolution.  It’s a liberation.  You’ve gotta think outside the box.  Decolonize yourself!”

Sky whose birth name is Kimberly Sue Yarbrough also just returned from the Standing Rock Camp with a message from those at the camp, “I watched children play and learn.  I watched lovers ride on horseback.  It is a peaceful place, drums every single night, prayers happening every day.  The sacred fire is lit from coast to coast.  From the Nisqually to Makah, from the orders of Canada, from the people of the waters.  Those from Navajo Nation have come and graced us.  Those from the East Coast have come and graced us.  Cherokee delegations.”  So far one hundred eighty five tribal flags are flying at Standing Rock, “Never in my lifetime did I imagine that I would see such a thing and yet here it is.  I ask you to continue to pray.  I ask you to continue to protect.  I ask you to do this all in nonviolence.  This is the message from the elders up there.”

Matim Strikes First (Ojibwa) is from North Dakota and also witnessed the September 3 attack on those defending ancestral burial grounds, sacred sites, and “sacred water.”  In many indigenous languages, “sacred water” is spoken as one word to signify the level of importance water is to life. 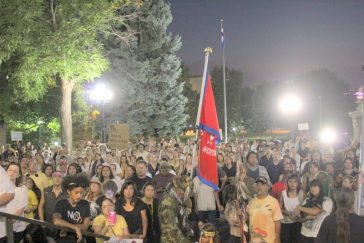 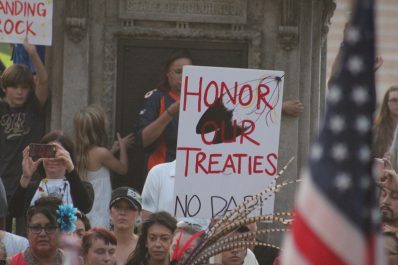 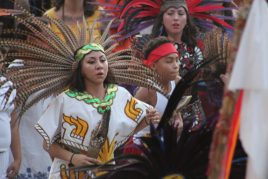 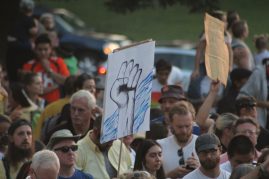 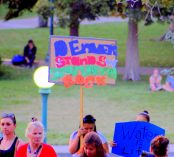 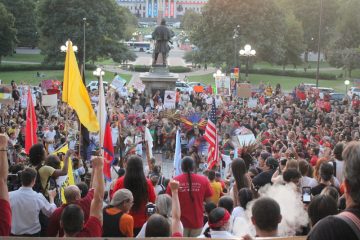 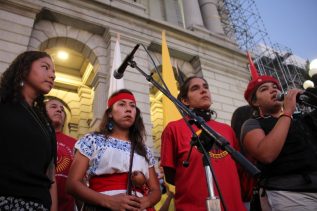 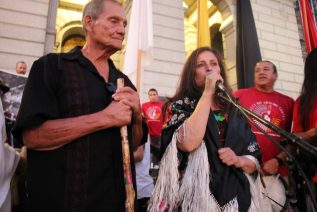 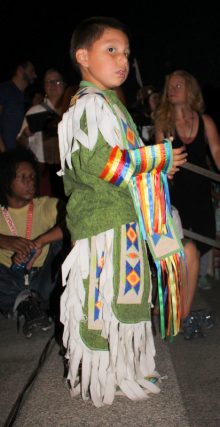 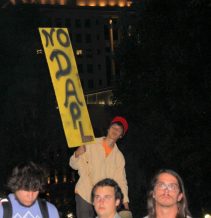 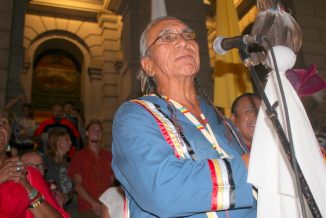 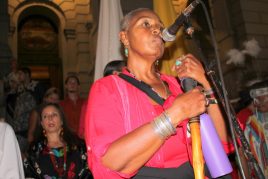 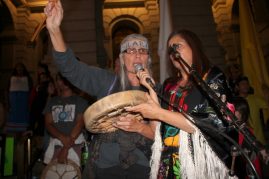 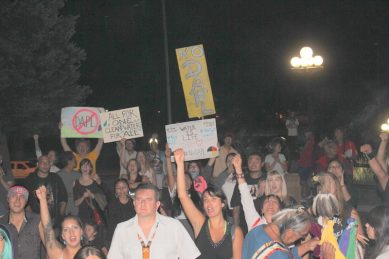