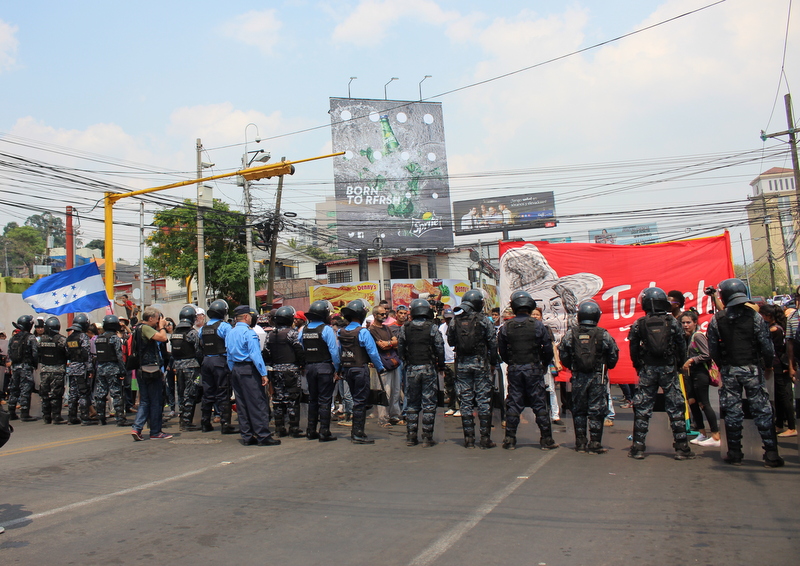 National Army and Police work together to prevent a march in support of slain Honduran environmental and indigenous activist Berta Caceres from moving forward in Tegucigalpa on April 16, 2016. (photo: The Nation Report)

“Upon finding this data, it didn’t seem to corroborate what researchers and human rights activists on the ground had been reporting or noticing or even some of the violence observatories in Honduras had been reporting.”

Washington based Center for Economic and Policy Research (CEPR), in a paper released September 7, questions a study completed in October of 2014 by The Latin American Public Opinion Project (LAPOP) and its conclusions.  In question is the Central American Regional Security Initiative (CARSI) funding from the US to Central America for USAID programs that are promoted to fight crime.  The Obama administration created CARSI in 2008 that followed the Merida Initiative created by the Bush Administration.

For 2016 the Obama Administration requested $286.5 million for CARSI but the Consolidated Appropriations Act of 2016 approved $349 million for CARSI up from $170 million the previous year. The bill added conditions for receiving the assistance, including requiring recipients to “address human rights concerns.”  But critics say that because of the US’ failure to account for positive impacts of the funds, that the implied goals of reducing drug trafficking, organized crime and gang activity are not apparent given their experience on the ground.

The CARSI funding was under review by Vanderbilt University’s LAPOP in its study titled Impact Evaluation of USAID’s Community-Based Crime and Prevention Approach in Central America. 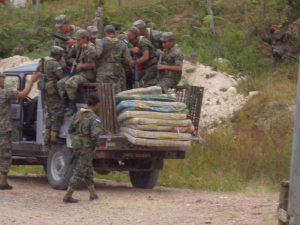 An April 25, 2011 burning and destruction of a village by the Honduran military. Here the bedding of villagers was confiscated. (photo: Observatorio Nacional)

The CEPR report titled Have US-Funded CARSI Programs Reduced Crime and Violence in Central America by David Rosnick, Alexander Main, and Laura Jung reexamined data from the LAPOP study to find methodological issues that led the three CEPR researchers to conclude that there were not statistically significant differences in crime rates over the years studied.  CEPR researchers refute the LAPOP study,  “The study cannot support the conclusion that the areas subject to treatment in the CARSI programs showed better results than those areas that were not.”

“Unfortunately, the study does not demonstrate a correlation between anti-crime treatment and actual crime reduction outcomes,” Rosnick, an economist and computer scientist, concluded. “This is especially important considering ongoing congressional debates over funding support to Honduras and other countries, and the prevalence of crime in pushing people to flee the Northern Triangle countries of Central America.”  Another area of importance is the amount that CARSI has received to date totaling over $1 billion.

The LAPOP study evaluated survey data measuring public perceptions of crime rather than evaluating reliable data collected by any official source.  The study surveyed community members in 127 neighborhoods of El Salvador, Guatemala, Honduras, and Panama where the CARSI violence prevention programs have received funds.  Jung of CEPR told The Nation Report that this methodology might serve a purpose in forming a public opinion poll, but not for drawing conclusions about actual crime rates.   “This is the information being used to convince US Congress to send many multiple times more money, millions and millions of dollars, $1 billion now, over  to programs in Central America that we have no proof are actually working.”

And when this information is used to persuade Congress to continue or expand CARSI programs, that the funding might serve to exacerbate rates of the ongoing violence according to a recently released report of a July 2016 human rights delegation organized by the human rights organization Alliance for Global Justice.  The group along with multiple other human rights organizations are calling for the withdrawal of US military aid to Honduras. 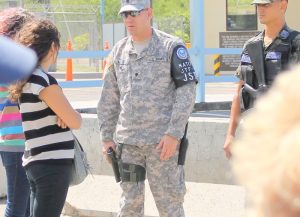 A US soldier grips his pistol as he orders members of a human rights delegation off the grounds of Soto Cano Air Force Base outside of Tegucigalpa in 2012. The base is where President Manuel Zelaya was initially flown after he was kidnapped by the Honduran military in a 2009 coup. (photo: The Nation Report)

The LAPOP study however, reported that “in several key respects the programs have been a success” citing a 51 percent reduction in the number of residents of “treated” communities (those receiving the CARSI funding) who reported being aware of murders and extortion crimes during the previous 12 months, and 19 percent fewer residents reported having heard about robberies.

Such methods of evaluation are subject to manipulation too, cites Jung.  For example, the current president of Honduras has appeared in multiple and repeated news reports claiming that crime is down in the country.  The persuasion effect could play a role in a survey respondent’s perceptions of crime in the community.

CEPR researchers conclude the need for valid and reliable evaluation where interpretations can be useful in measuring effectiveness of CARSI programs.  To date, the LAPOP report is one of the few, if not the only report that is available to the public raising questions about the accountability for US funds being transferred to CARSI.  “Hopefully more studies will be undertaken to examine how effectively US taxpayer dollars are being used to address very serious issues of crime in Central America,” Rosnick said. “Unfortunately, the only publicly accessible assessment available so far offers very little that’s useful for making such an evaluation.”

Honduran Coast Guard takes supplies in 2012 to an escalating military presence in the village of Ahuuas in eastern Honduras where US DEA and Honduran military shot at two canoes of villagers in May of 2012. Two pregnant women an adult male, and a child were killed and multiple others were seriously wounded in the attack. The US has never compensated the survivors for their injuries (photo: The Nation Report)