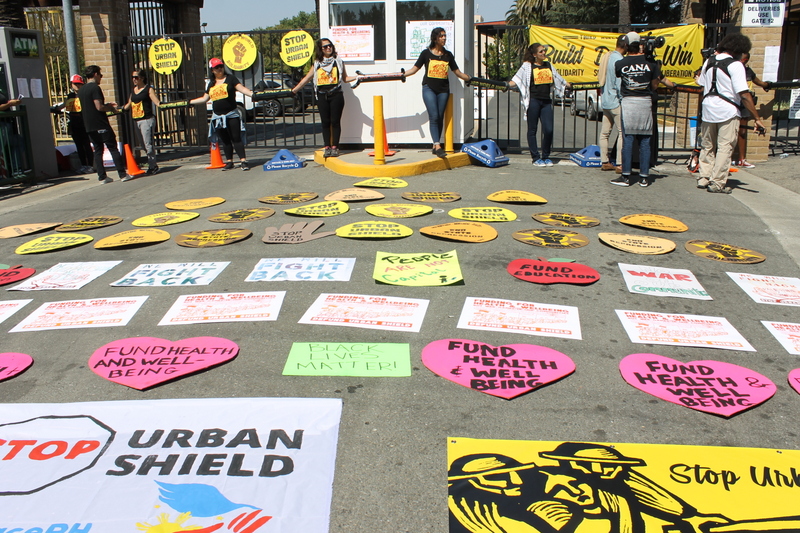 OAKLAND-A board member of The Nation Report was among the 20 who were arrested this morning protesting the annual Urban Shield training and expo event held at Alameda Fairgrounds in Pleasanton, California about 35 miles southeast of Oakland.

The annual Urban Shield event brings together police and city officials to view the latest in policing equipment and to hear of the latest tactics that critics around the country say has become more militarized in recent years. Urban Shield uses the motto, “Intense Policing for Intense Times.”

Activists locked down at each entrance to the fairgrounds and also inside the event as marchers surrounded the fairgrounds and offered support to those who blocked the entrances.  Hundreds participated in the protest by either marching, rally, or direct-action.

Thirty-year old Nicole Wires of Oakland who is a board member for The Nation Report was on the support team for those who locked down.  At direct actions, support teams offer food, water, and other necessities to those who are unable to tend to themselves because their arms are locked to each other, usually for the purpose of stopping business, barricading equipment, or blocking entrances of events they are protesting. 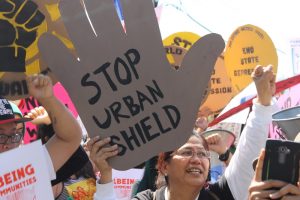 During a solidarity rally held at the fairgrounds, speakers talked about the police repression that they had previously experienced in their homes or on the streets in marches and actions which led them to participate in today’s direct action.  Speakers said that the Urban Shield event is “promoting further violence and an increased war mentality by police in marginalized communities.”

Oakland had been a previous host city to the event but large protests were credited by organizers for having moved the protest out of town.  Oakland spends 60% of its city budget on law enforcement.