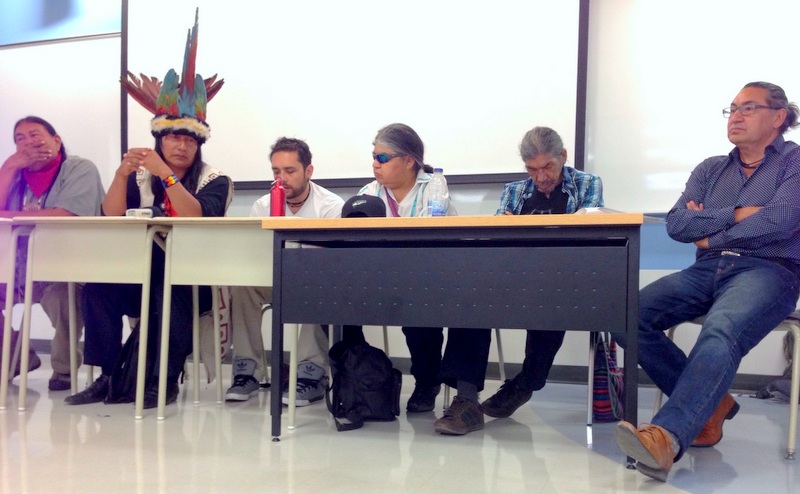 MONTREAL-The International Indigenous Peoples’ Movement for Self-Determination and Liberation was the host topic for a panel discussion by Tom Goldtooth-Dine’ and Mdewakanton Dakota from Minnesota, Manari Ushigua Kaji of the Sapara Nation of Ecuador, brothers Joseph and Jacob Owate of the Anishnabe Nation, and Romeo Saganash, MP, of the Cree Nation. 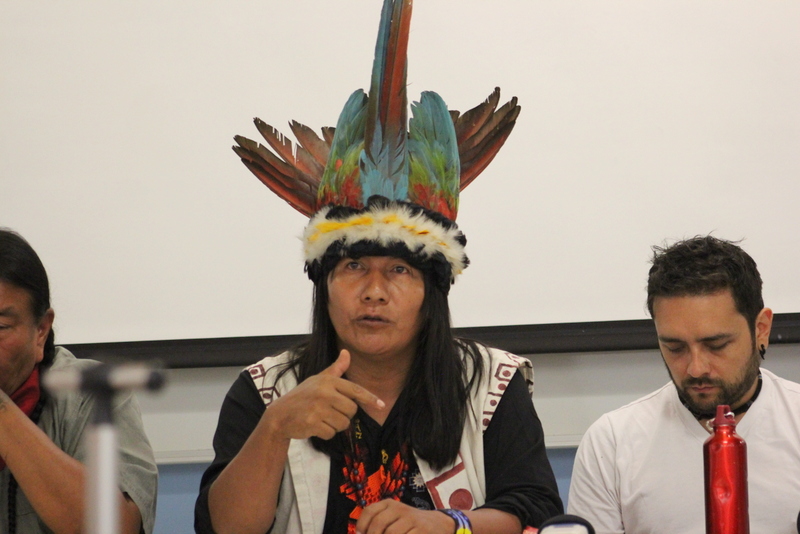 Manari Ushigua Kaji of the Sapara Nation of Ecuador comes from an ancient civilization that once was a nation of 200,000 people who spoke 39 languages or dialects but now number only 555 people.  They inhabit original forest land and maintain their clean air and water free of contamination.  He said that for his people, there is no future, only a past and that what happens to them takes place in the spiritual world before it happens in the material world, “For us there is no future, only a past.”

Ushigua Kaji described a spiritual connection between material objects in the non-native world to that in the spiritual world, “Petroleum has a spirit.  Uranium has a spirit.  Trees, water have a spirit.  We are taking down the trees and using oil just for ourselves.  There are spirits that are taking care of them.  Spirit connects us with the rest of the universe.” 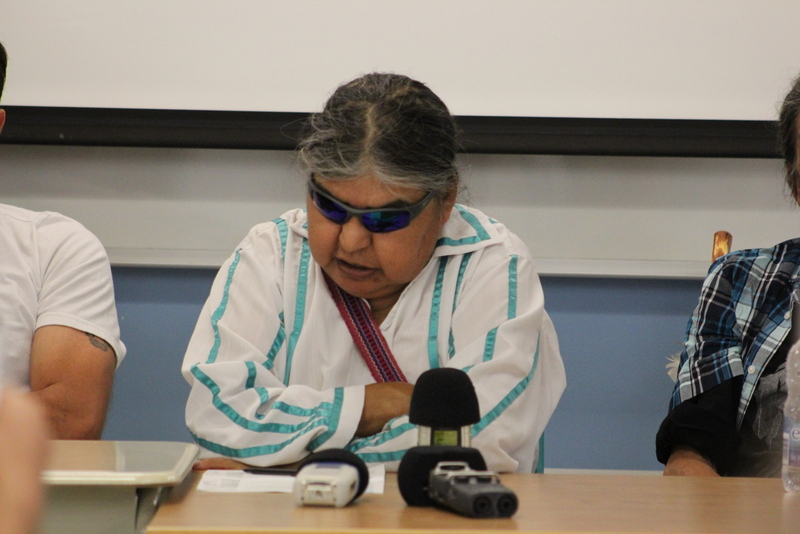 Joseph Owate (Anishnabe Nation) was forcibly taken from his parents to attend boarding school ten months out of the year.  He recalls earlier spending most of his life in the bush learning to hunt, trap, and fish.

In 1987 lumber companies entered the territory of his people through a trilateral agreement between the band council and the Quebec government.  He protested and was jailed.  He said he was charged with “mischief.”  He said in court he was asked directly for permission to cut lumber in his territory to which he responded, “This is unceded territory and you have no rights here.  The next day they arrested me.”

Owate said that about 85 percent of the wildlife reserve has been cut.  Only one species of tree is left using the clear-cut method rendering the forest uninhabitable for many species, “The moose have left.”

He wept when he described the trees that had been cut and had been discarded and left by the forestry companies, “You can not imagine how it looks.  Because if you would see the images of what they’ve done to our land, to our territory, our way of life.  They’re destroying completely our way of life.  And yet they want us to live in the city or on a reserve.” 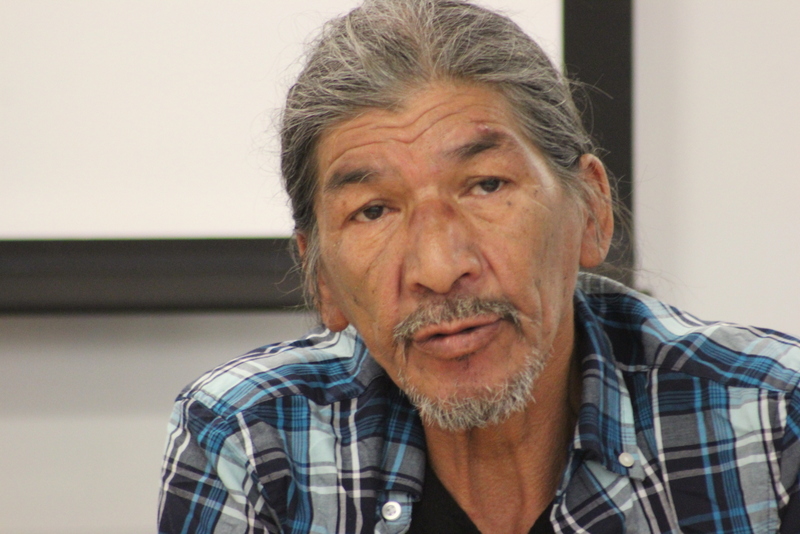 Jacob Owate was also arrested protecting his territory from deforestation, “We did some blockades and we got arrested.”  He founded Cocoville Academy for the purpose of preserving traditions among the younger generations.

“When I kill a moose, it becomes a resource, when I put it in my freezer it becomes my capital.  Now my capital is being disposed of as if I didn’t exist in the forest.  The medicine is being crushed, nature is being changed, the animals are moving, and this is what is happening on our land.  This is why I created Cocoville Academy, to show the world how did we exist prior to the arrival of the Europeans before colonization.” 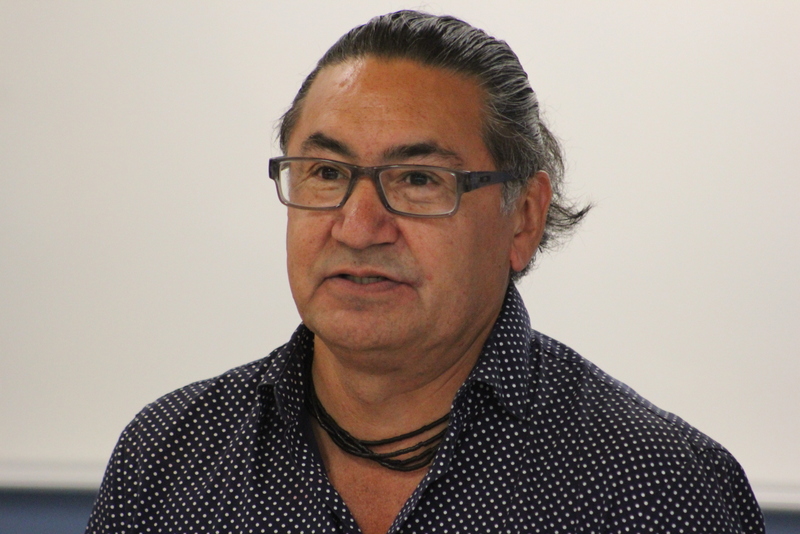 Romeo Saganash from Waswanipi in northern Quebec was also taken from his family at age seven to attend boarding school.  He began his presentation saying that 57 percent of the energy in the province of Quebec comes from his territory.  He is a member of Parliament and introduced bill C-262 in Parliament that passed 1st reading in April.  Saganash was one of the original negotiators of the UN Declaration on the Rights of Indigenous Peoples, “It took a long time for us to get the member states that we negotiated within that process to recognize that Indigenous Peoples were Peoples like all other Peoples.  It was important because only Peoples under International Law have a right to self-determination.”  The four countries that voted against the UN Declaration in 2007 were Australia, Canada, New Zealand and the United States.