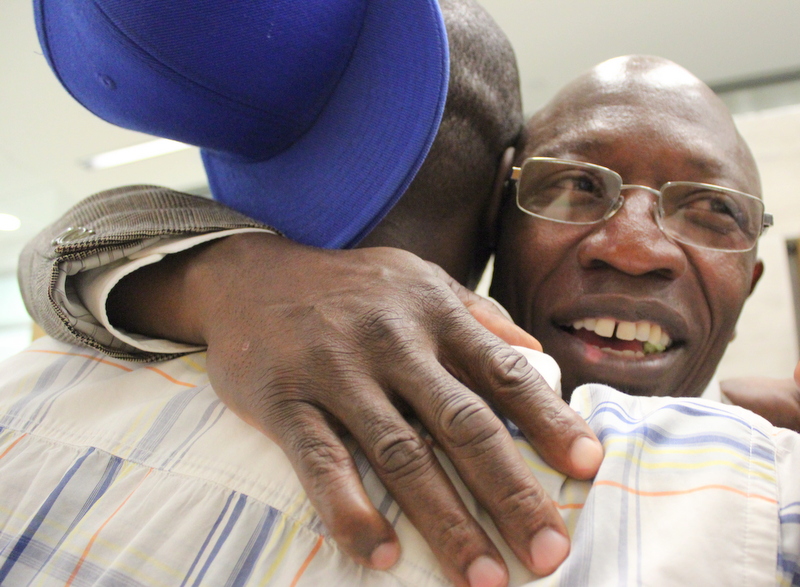 Clarence Moses-EL hugs his son Anthony while knocking off his cap following closing arguments at his retrial for a 1987 attack.  Moses-EL has always maintained his innocence during and after his 1988 trial where a jury convicted him with no evidence except the dream of the victim. He was granted a new trial in December of 2015  following the July 2015 testimony of a man who confessed to the attack. (photo:  The Nation Report)

“This is one of the most important decisions you’re going to make in your life.  This is not a speeding ticket.”

Closing arguments were heard in the trial of Clarence Moses-El who is being retried for charges of sexual assault and burglary committed in 1987.  Moses-EL has maintained his innocence throughout the close to 29 years he has spent in prison for the crime.

Despite refusing to testify during a court appearance earlier this week, LC Jackson, the person who once confessed to the 1987 attack on a Denver woman, was still heard.

In a reenactment of a July 2015 testimony given by Jackson who is currently incarcerated at the Arkansas Valley Correctional Facility for other crimes including a similar sexual assault months later, attorneys for Clarence Moses-EL who is now on trial for the attack, read from the transcript of the earlier hearing.

At that July 2015 hearing, and as read from the transcript, Jackson said that he was in the first stages of liver failure, and that he suffered from Hepatitis C.  He also said that he had refused dialyses treatment.  He testified that his motive for confessing was that he needed to “relieve myself and not carry this with me” and that it was time to “bring it together” and that he wanted to “get this done”, “If I don’t choose to repent my sins, I can’t make it to the kingdom of heaven.”

He testified about suffering from personality swings from one extreme to the other “like Dr. Jekyll and Mr. Hyde,” references to a 19th century novel portraying a character with shifts in personality that led to violence

He described how he struck the victim.

In closing arguments Prosecutor Bonnie Benedetti directed the jury to the evidence showing that the victim was consistent about identifying Moses-EL at all prior hearings on this case and that the victim’s fuzzy recollection for details about timing was the result of the number of years that had passed.   But defense attorney Eric Klein reminded the jury that the victim never identified Moses-EL when she was initially questioned, that no physical evidence pointed to him, and that she first identified the attacker as someone with slicked back hair.   One witness testified that Moses-EL wore slicked back hair, two witnesses testified that Moses-El had hair either hair cropped close or a bald head.  Saliva and blood typing analysis pointed to LC Jackson and highly pointed away from Moses-EL.

But Klein also reminded the jury that they weren’t responsible for solving the crime.  They only needed to decide whether Benedetti proved that Moses-EL was guilty beyond a reasonable doubt.  “They asked you to convict a man based on that?  That’s reasonable doubt all over the place.”

“[It would be] also a tragedy to convict an innocent man.  That’s not justice.   That’s the definition of injustice.”