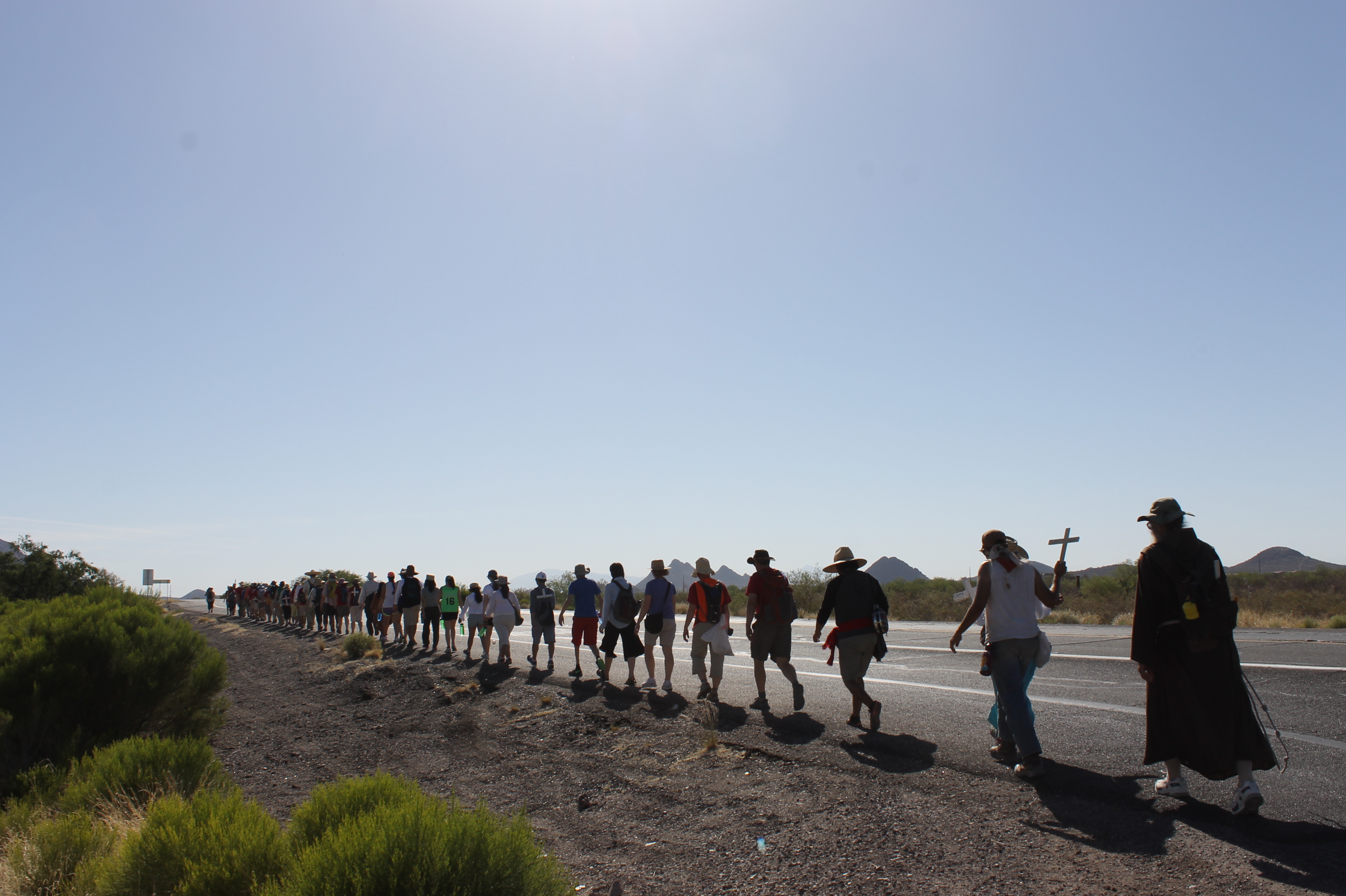 TUCSON-Fifty-three participants completed the journey across the Altar Valley in the Sonora Desert in Arizona arriving in Tucson today after a week-long walk. The Migrant Trail walk begins in Mexico and traces 75 miles of desert that is often crossed by migrants arriving into this country. Organizers from immigrant rights groups say that they organize the event to denounce and recognize the loss of life on the U.S.-Mexico border. They join other social justice organizations that have made public statements calling for immigration, labor, and trade policies that keep families intact and also recognize the human dignity and vital contributions of our immigrant sisters and brothers, according to Tucson immigrant rights group Derechos Humanos, one of the groups that organized the walk.

Groups such as the American Friends Service Committee and the Alliance for Global Justice, two social justice organizations have expressed to The Nation Report in previous interviews that current immigration policy has focused an unbalanced amount on militarization of the border and not enough on “the mention of the most sacred of all things, the loss of human life due to border policies.”  No More Deaths, a border area group that monitors the treatment of migrants, reported that 179 bodies were recovered from the desert last year and Derechos Humanos reports that 77 have been recovered so far this year.

One policy to which the groups refer is Operation Gatekeeper that has funneled migrants into the most treacherous parts of the desert. Recent numbers have shown an increase in border deaths since the implementation of these policies. According to Derechos Humanos who organized the walk, the intentional dehumanization of migrants and the militarization both play a role in contributing to these deaths. 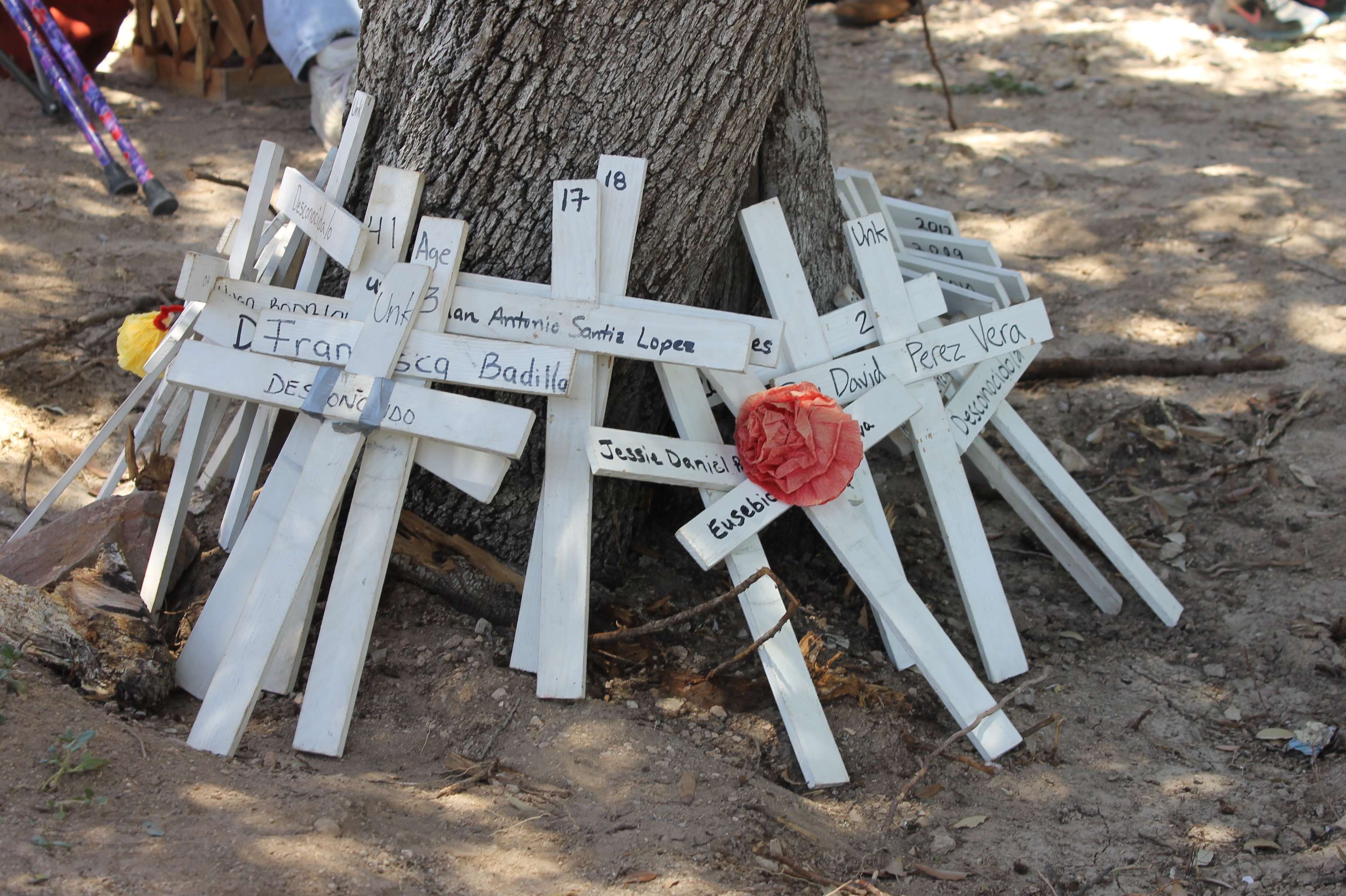 Migrant trail participants lay crosses down at the end of the 75-mile walk. The crosses bear the names each of the 77 people whose remains were found this year

Throughout the walk, participants carry crosses bearing the name of someone whose body was found in the desert.  If identification of the body was not determined by the coroner’s office, then “desconocido(a)” is written on the cross if the remains were in a too advanced stage of decomposition for identification.  Sometimes decomposition has reached the point to render gender identification impossible.  The number of unidentified remains far outnumber the number of those who can be identified.  According to documents kept by Derechos Humanos from the Coroner’s Office, of the 77 bodies recovered so far this fiscal year, only ten have been identified.  Identifying a body has sometimes been done through the documents a person is carrying, through clothing, through jewelry, and sometime through dental records. Often though, there are no clues left to identify remains.

Throughout the duration of the walk through the desert, the names on the these crosses are called out-or desconconocid@- by walkers followed by calling out “presente” indicating that the fallen are spiritually with those who are walking or that the walker is finishing the walk for those who couldn’t. 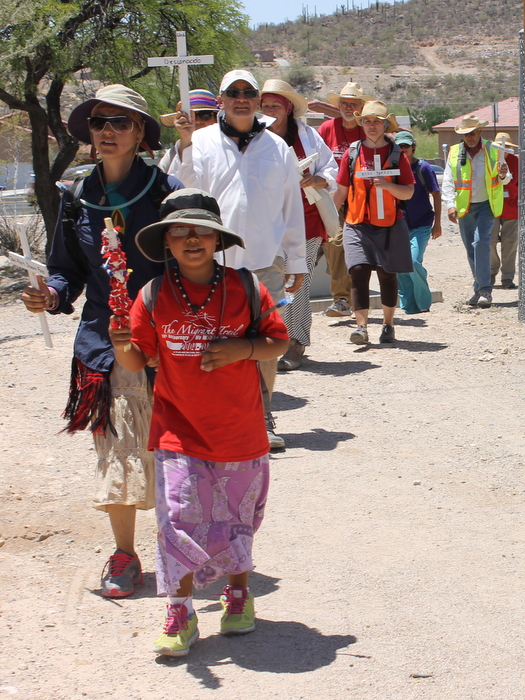 This year’s 10th Annual Migrant Trail Walk saw its youngest participant ever to walk the entire length of the trail.  Seven-year old Itzel Anisa Cosumayo  carried a cross that represented someone who had not been identified.  She said in a press conference, “When I held my cross I was thinking about whether he or she could one day come back alive and would be happy that I finished their way to here or wherever they were going”.   Itzel told The Nation Report that the cross she carried was labled “desconocido” and that she had done the entrie seven days of the Walk.  She finished with, “Next year I’m actually coming.” 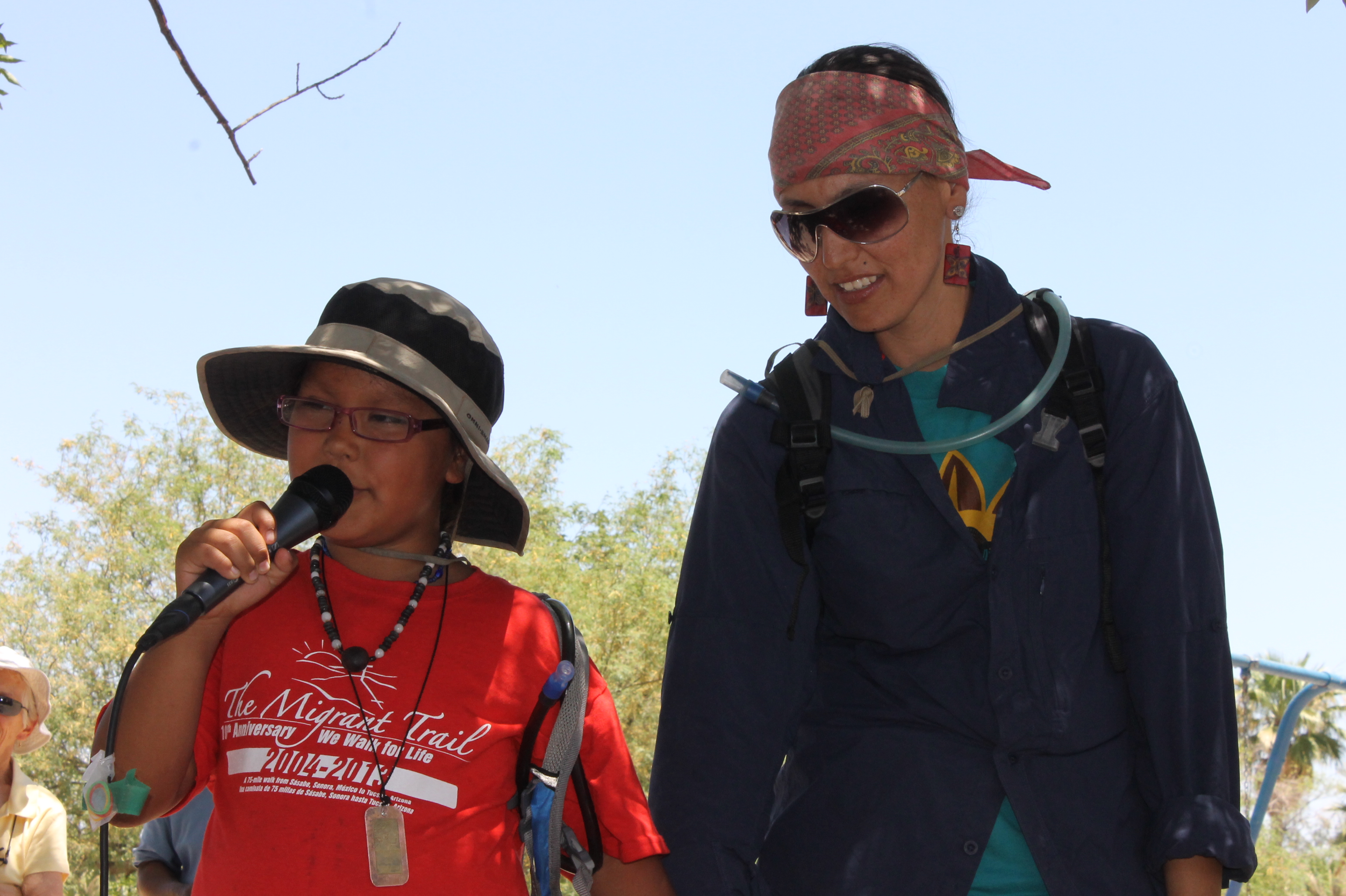 Judith Marquez of Denver who walked the Trail for the first time expressed a similar sentiment.  At a press conference which saw walkers arrive to Kennedy Park ending the final leg of the journey, Marquez said that the experience was humbling, “[The Walk] makes us realize how insignificant we are and how big this world is.  And also what [migrants] are committing [to] when they say, ‘I’m going to risk my life to be with my family.’  We carried the crosses of those who were found but there are a lot of people walking in rural areas who have not been found.  Every life is precious.  A life [of those who have fallen] means the world to someone.  As I walked [into the park] I felt that I was finishing the journey for Rosana.  That’s who I carried.  It’s so unfortunate that they could not be with their families.”

Elliott Housman-Turrubiate just graduated from Colorado State University in Fort Collins, Colorado and this is his second year to participate in the Walk.  He told The Nation Report, “There’s something about the [desert] where tragedy, trauma, and violence happens.  And it happens everywhere.  Racial profiling happens against brown folks, people of color, poor communities.  It happens everywhere.  But there’s something about the ground zero where this is most felt and communities are most impacted.  There’s something different about being here and feeling it emotionally and even seeing it that is very different than knowing it.  It’s important to reaffirm that this tragedy, the deaths, the violence is going on.  I can’t imagine what the folks who live here, live this every single day of their lives.  And so I can’t imagine the amount of trauma that it’s creating for folks.  I think it’s going to be felt intergenerationally.”

Cat Rodriguez is an organizer with Derechos Humanos or the Coalition for Human Rights in Tucson. She has been an organizer of the Migrant Trail for all ten years of its running, “As much as there has been discussion about immigration reform, as much as there has been discussion about Dreamers, and farmworkers, nobody talks about the deaths.  I have [been responsible for] missing person cases, to do the tracking of the deaths that we have been doing since 2003.  So now when I walk, I talk to the hundreds and hundreds of family members that I have talked to who are looking for relatives.  Just before I left I had a message from somebody whose been looking for someone since 1973.  And the reality is, when it’s our loved one, we never stop.  We never stop looking.”