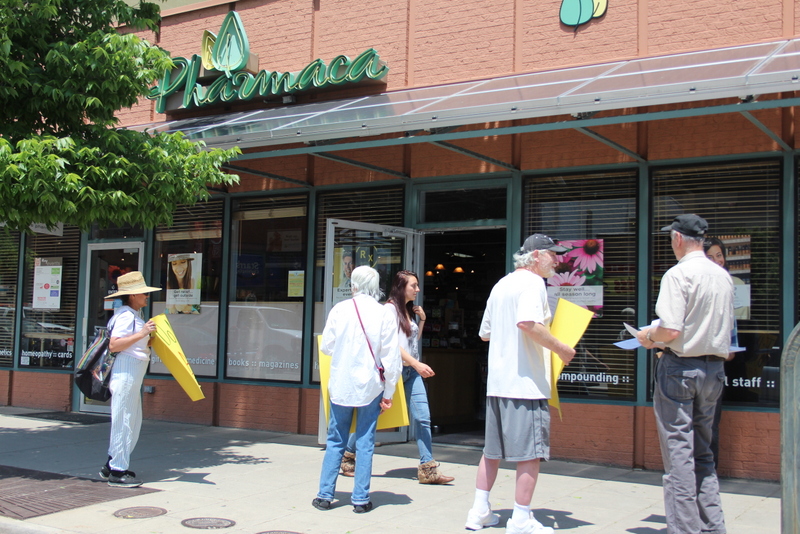 BOULDER-Members of the Rocky Mountain Peace and Justice Center (RMPJC) stood outside of Pharmaca Pharmacy today to picket the store’s selling of Ahava skincare products.  And several passersby stopped to find out why.

The Rocky Mountain Peace and Justice Center has been a vocal force locally in issues such as the closing of the Rocky Flats Nuclear Plant, the rights of the homeless community, and the environment.  Most recently, the Middle East Collective arm of the organization took the Pharmaca pharmacy to task about the establishment’s selling of Ahava skincare products.  They say that the sale of these products violates international law because their marketing practices claim manufacturing in Israel rather than in occupied territory.

The Pharmaca pharmacy first came to Boulder in 2000 and set up shop in the Ideal Market Shopping Center.  Since then the business expanded to eight stores in four states and also to West Pearl Street in Downtown Boulder and to the Table Mesa Shopping Center.  The store was voted Best of Boulder by The Boulder Weekly for three years and is credited with offering not only prescriptions but over-the-counter medications.  What sets the store apart from other pharmacies though is the business concept of alternative treatments and preventative measures to include natural supplements and beauty products.  One of those beauty products is a line of skincare products produced in the West Bank bringing the protesters to West Pearl. 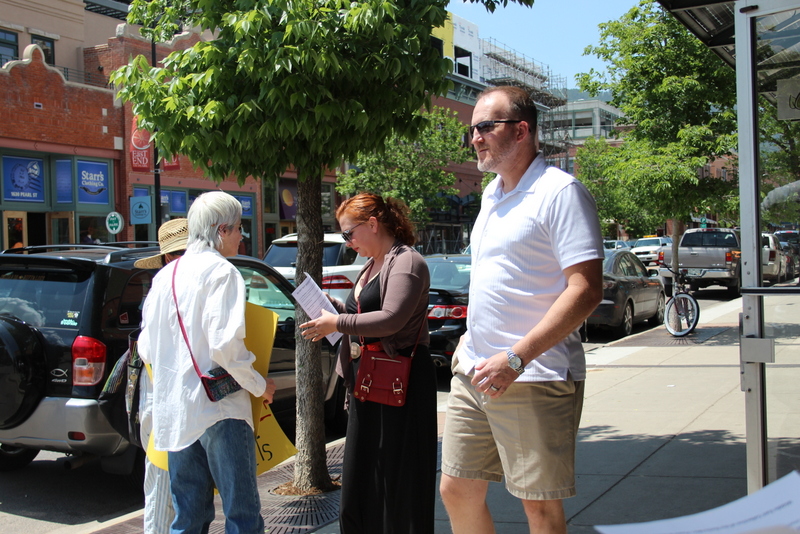 Caroline Bninski, member of the Rocky Mountain Peace and Justice Center asks a passerby if she knew of the Ahava boycott.

strives to improve the health of its communities by broadening the scope of preventative and treatment options available to the public.  We also extend our core values beyond the boundaries of the store, helping to make the world a healthier place for everyone.  Our product selection includes eco-conscious brands.  We carry products from companies that have signed the campaign for safe cosmetics.”

So as a longtime customer Tom Mayer of the Middle East Collective said that it’s hard for him to understand how a store with such high standards could ignore pleas to discontinue selling the Ahava line.   He has vowed to boycott the pharmacy until the company stops selling Ahava products, “My wife and I have bought stuff at Pharmaca for years but we’re not going to buy as long as they keep selling Ahava things.  We’d like to start again if they stop.” 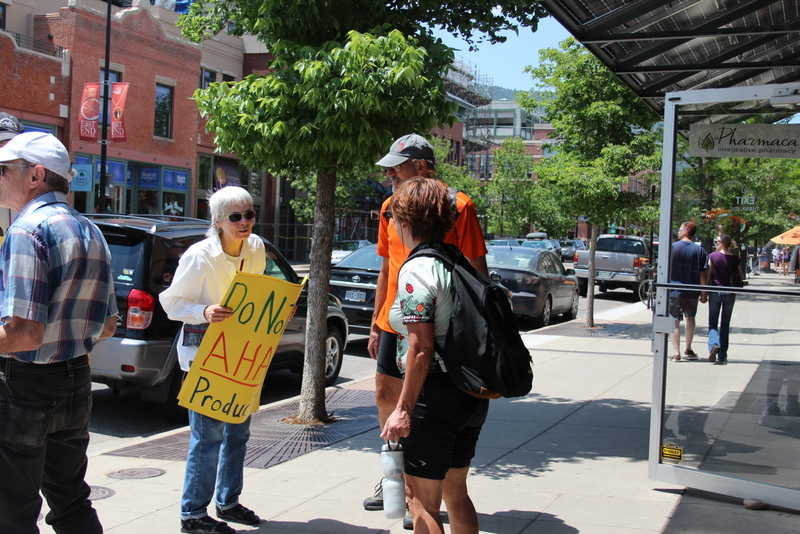 Ahava administrative headquarters is located in Holon and the company owns a manufacturing plant in Mitzpe Shalem on the Palestinian West Bank.  This location is at issue for the extracting of natural resources from the Dead Sea particularly the mud which is excavated and then used in Ahava’s skincare products.  The human rights organization CODEPINK has been campaigning against the company for years saying that the extraction of these natural resources violates the Fourth Geneva Convention since the extraction is happening on occupied territory.

The RMPJC has also taken issue with the positioning of the company on occupied territory according to member Dan Winters who said that the rights of Palestinians continue to be violated,

“The products that are being sold at Pharmaca-the Ahava products-are made illegally on the West Bank.  The United Nations has found at least thirty occasions that Israel should get out of the West Bank.  And they of course refuse to do that.  They trample on the rights of the people in Palestine.   They try and make believe that [the factory is] on their territory and that they have the right to do that.  Well no.  It’s on occupied territory.” 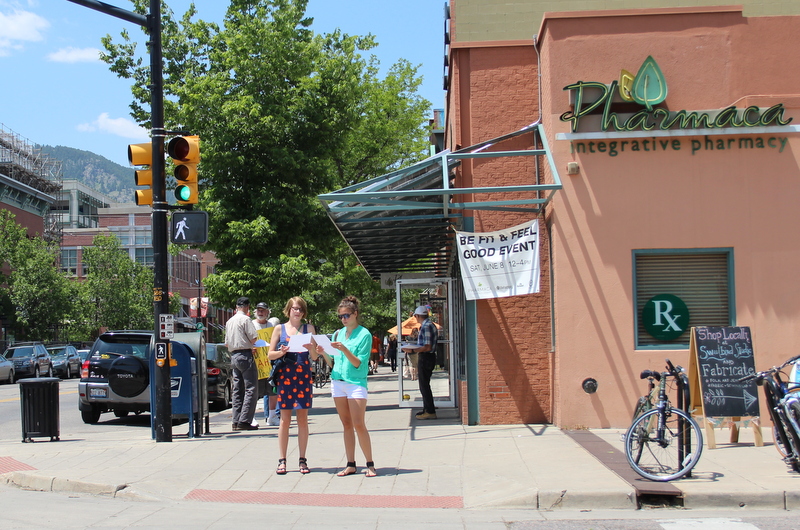 Two women stop to read the information handouts passed out to those who were passing by the Pharmaca pharmacy.

Caroline Bninski is a member of the RMPJC who talked to passersby.  She told The Nation Report that the group approached local Pharmaca officers, “We’ve had meetings with them and asked them to stop carrying Ahava and they said ‘no.’  So that’s why we then decided to come and stand outside of the store and let the customers know and let Pharmaca know that these products are unethical to be selling given the suffering of the Palestinians by Israeli authorities.”

Tom Mayer was a member who confronted the company,

“We talked with one of the vice-presidents about Pharmaca, supplied them with information, asking them to stop carrying Ahava skincare products. They listened to us but refused to accept the arguments that we gave.  [They] replied to us in a letter which could have been written by the Ahava propaganda forces.  [They] didn’t answer any of our arguments so we responded again and they didn’t reply.  They said that Ahava is a very respectable company and it makes excellent products and it’s licensed by Israel to make those products.  So after negotiating for a long time, we said ok, were going to picket you to get people not to do it.  This isn’t just out of the blue.  We’ve been trying for about a year or more.  We didn’t particularly want to harm Pharmaca.  But they just refused to stop selling the stuff.  As soon as they stop selling it then well stop picketing it.”

The RMPJC said that there is an international movement to focus on Ahava products and it’s been successful in Norway, Japan, and in some parts of Germany.  For Dan Winters though, the issue was illegal occupation, “You know when we occupied Germany and Japan, we got out after a year or two.  Well this is since 1967 that they’ve occupied the West Bank.  It’s time that they get out and at least stop merchandising products erroneously and falsely.”

The group said that similar products are being sold in Jordan and that those products do comply with international law.  They said therefore they will continue to pressure the Pharmaca Corporation.