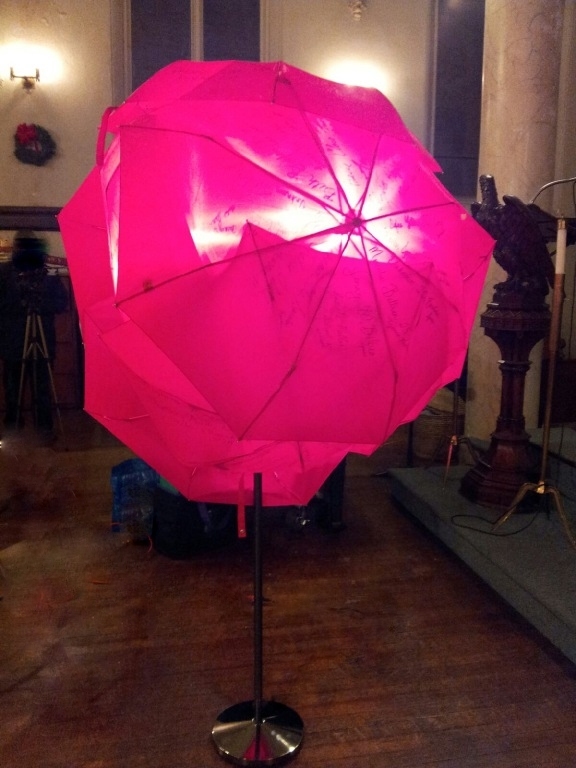 photos: Faustina Bañuelos/The Nation report
An umbrella bearing the names of fallen sex workers in the year 2013 was displayed at the Manhattan location of the 2013 Annual International Day to End Violence against Sex workers.

NEW YORK CITY-The day before last year’s International Day to End Violence against Sex Workers commemoration, twenty-four year old Alexis Lace of Riviera Beach, Florida arranged to meet a client at the client’s apartment.  Her client was reported to be Paul Charles Farina, 20, who was arrested and charged with second degree murder for stabbing her so many times that the wounds led to near decapitation.  Lace is not alone.  Every year global memorial events share the same list:  the names of those who have died within the previous year.  This year’s list contains seventy-one names-thirty in the US.  Many of the deaths are the result of extreme violence including stabbings-the most common mode of killing-beatings leading to death, dismemberment, mutilations, and being thrown out of windows.  Of the thirty deaths in the US-twenty-four were the result of violence.  Two of the deaths that occurred were the result of police violence against sex workers.  Those took place in Kentucky.

The International Day to End Violence against Sex Workers was first conceptualized as a response to the murders committed by serial killer Gary Ridgeway.  In 2003, Ridgeway was convicted of forty-nine murders, most of whom were sex workers or homeless youth.  He acknowledged killing seventy-one but because he said he lost count, it’s estimated that he killed over ninety women.  He later became known as the Green River Killer after five of his early victims were found in the Green River in Washington state.  He is now incarcerated at the Washington State Penitentiary serving forty-eight life sentences plus 480 years. 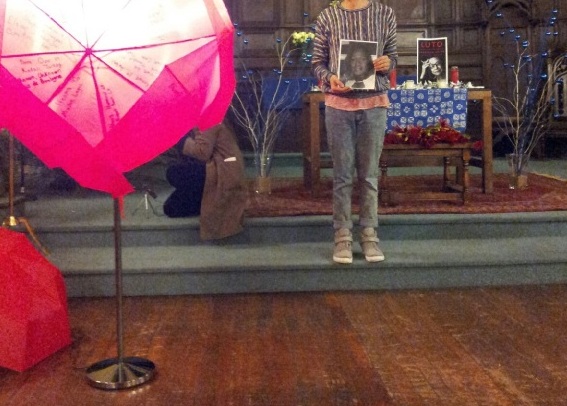 The Trinity Lutheran Church of Manhattan was where the event In Memory We Live On: The International Day to End Violence Against Sex Workers took place.  Sex work communities including allies, advocates, and family and friends attended the celebration of life dedicated to “strength and resilience of those involved with or impacted by the sex trade.”  The evening event offered participants an altar where those in attendance were invited to add mementos, candles, well-wishes and notes.  One addition to the altar this year was a photo of Gabriela Leite, a long-time sex-worker’s rights activist and former sex worker.  She was one name that was added to the 2013 list when she died on October 11th.  She was sixty-seven.

In her writings Leite said that because of the ongoing human rights abuses she saw among other sex workers, she began organizing and advocating for sex work as a legitimate profession.  She accomplished this by organizing a national meeting of sex workers that took place in Brazil in 1987 and from there became active in the international sex worker movement.  She founded “Beijo Da Rua”-Kiss from the Street, a sex workers advocacy newspaper and also led the movement to fight against AIDS while the understanding of the disease was still in its infancy.  Even so, she upheld the health rights of those who carried the virus.

Her talents were further illustrated through the founding of Davida, an NGO that used art and performances to present the rights of sex workers to the greater community at public engagements.  This led to the founding of a research and documentation center on prostitution. Her successful clothing line Daspu contributed to the financial needs of her NGOs.

In addition to her sexual rights work, she was the first known sex worker to have run for Brazilian Congress as a Green Party candidate in 2010.  Earlier in 2003, she had support of the Green Party when she attempted to decriminalize prostitution in the country.  While she lost the election, it was her campaign platform that raised the issues of Brazil’s health care system, gay rights, reproductive rights and sex worker rights according to sex worker’s rights groups who presented a session on her life at the 2012 International AIDS Conference in Washington DC.

Leite authored the book “Daughter, Mother, Grandmother and Whore” that documented her life and was later converted to the film “A Kiss for Gabriela.”  The film was featured at the 2012 International AIDS Conference and followed her life from the 1980’s-when she began organizing sex workers-up to her congressional candidacy.  The film won the “Best Documentary Pitch” in the 2011 Fusion Film Festival. 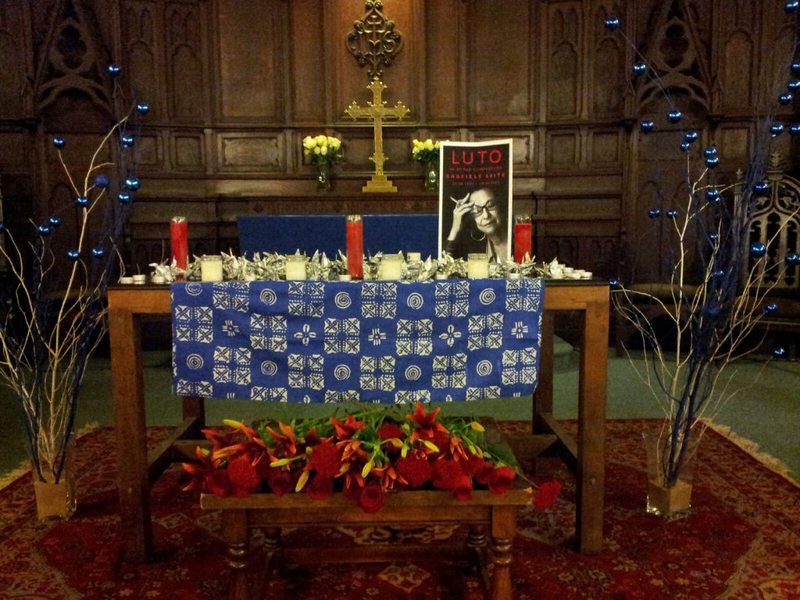 Each year names are collected from sex worker advocacy organizations and from media organizations of those who have died and were former sex workers.  Organizers say that the list is incomplete because some deaths are unreported and that occupations of deaths are sometimes unreported.  Still, they say that recognizing the known deaths of their colleagues is an initial step to the process of healing and also facilitates rejuvenation to continue their work.  This healing process is recognized globally.  The event takes place in six continents and it was in 2012 at the International AIDS Conference that the strength of the movement was demonstrated when simultaneously a satellite conference was held in Kolkata,India and a pre-and post-conference were held in Kiev, Ukraine.  Sex workers from outside of the US were turned away by US immigration due to their work in the sex trade drawing protests from participants to the Conference who said that eliminating one of the key populations most affected by the AIDS epidemic will stunt the process to solving the crisis.  These actions taken against the sex worker community are some of the reasons that organizations such as the Sex Workers Outreach Project SWOP-NY and Sex Workers Action New York-SWANK say that they exist.  Kate D’Adamo is a community organizer with both groups and talked to The Nation Report about the advancements that she sees in the sex worker’s rights movement but also the challenges that the community still faces,

An open mic was part of the evening for those who wanted to share thoughts, poems, or words of memory to the greater community.  This year’s organizers of the Manhattan event said that “We take this solemn day every year to come together as a singular voice, and re-commit ourselves in the struggle to fight for the rights and dignity to which all are entitled.”  Some of that work has paid off.  On June 20, 2013 the New York State Assembly passed the No Condoms As Evidence Bill preventing police from using the mere possession of condoms to prosecute people for prostitution.  This law enforcement practice has long been at issue among health advocacy organizations who especially raised this issue at the 2012 International AIDS Conference.  They said that sex workers internationally who are prosecuted for carrying condoms turn to eliminating their use for fear of prosecution.  The international group Human Rights Watch raised the same issue in a report that was presented at the 2012 AIDS Conference.   The report denounced the criminalization of condoms and safe sex against sex workers in Los Angeles, New York, San Francisco, Washington DC.

Brazil’s advancements in separating the two issues became evident with legislation that is attributed to  the work of Gabriela Leite.   Brazilian Federal Deputy and gay rights activist Jean Wyllys supported legislation in 2012 that not only distinguished between prostitution and human trafficking but decriminalizes and regulates sex work as a legitimate profession.  This distinction has been at the root of  the work of sex worker advocates who say that funds that are earmarked for anti-trafficking measures, are actually being used to arrest consensual sex workers in an effort by law-enforcement to produce numbers to those who are providing the funds.  Kate D’Adamo expanded on the increased harm to sex workers by the misconceptions associated with some anti-trafficking organizations and law enforcement,

“Trafficking of persons in all of its forms is really extreme forms of labor abuse and of exploitation.  And so the conversation shouldn’t be about sex work versus sex trafficking.  The conversation around trafficking is about increased policing, increased criminalization , all of which do incredible harm to people in the sex trade.  So what you’re seeing is a lot of well-intentioned organizations , well-intentioned individuals who are simply not tapped in enough to the advocacy issue that they’re talking about and don’t talk enough to the impacted populations .  When you’re talking about trafficking in the sex trade, who you should be talking to are the people in the sex trade to ask, ‘how do we stop this exploitation?  What marginalizes you?  And what makes you vulnerable to these forms of exploitation?’  Unfortunately law enforcement and the institutions that are being given the power to address trafficking are also the same institutions that you’re seeing the highest rates of violence coming from.  What we really should be talking about is, how do we interact more with the sex trade to bring it to the surface, to not push it underground and how do we make sure to mitigate those unintended consequences from the policies that we enact.”

Soon after the Manhattan commemoration, the Sex Workers Outreach Project of New York cited the importance of working on educating the media and voted the issue as the number one area of focus for the upcoming year.  Following close behind, the group pointed to the importance of connecting the issue of sex work to labor and to creating more structure for members to work.  Kate D’Adamo stressed the need for basic interaction in order for the general community to become more informed,

“I would say, reach out to the sex worker community.  Look at your own stigma.  Look at the ways that you feel. And ask what that’s based on.  Is that based on interactions with people?  [Or] interactions with an incredible and vibrant and diverse community which has a constellation of incredible experiences to draw from?  Or ask if that’s coming from [the television series] CSI and the representations which are not accountable to the same population .  If you want to know what a sex worker is like, you’ve got to go to sex worker community organizations and actually interact with an incredible amazing community that is built on autonomy and self-determination at its core.”