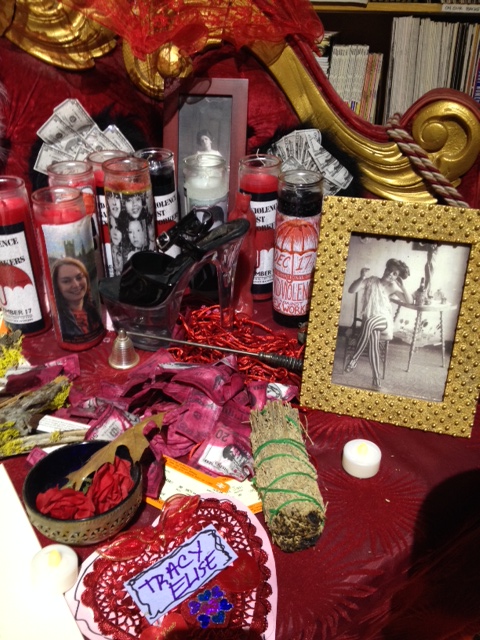 photos: Ida del Rio/The Nation Report
An altar remembering sex workers who have died or were killed on the job.

SAN FRANCISCO-In 2013 so far, seventy-one sex workers globally have lost their lives, sixty-eight while working in the sex trade.  Thirty-one were from the US.  Many of the deaths were the result of stabbings, beatings, decapitation, and also dismemberment.

Today the Bay Area Sex Worker Outreach Project-SWOP hosted an event to mark the 10th Annual International Day to End Violence against Sex Workers at the Center for Sex and Culture in San Francisco.  Sex workers, writers, poets, and allies as well as performances by James Darling, Andrew Shakti, and Bobby Barnabe Bryce joined together to honor victims of violence as well as to celebrate some victories that sex worker activists won in 2013.

In addition to remembering victims of violence, December 17th is also a day that is marked for raising safety issues in the sex trade,  “Luna” with SWOP-Bay Area runs a monthly support group for sex workers. As one of the organizers of the Bay Area event for International Day to End Violence against Sex Workers, she told The Nation Report about how “community” is one of the ways sex workers can keep themselves safe,

“I think that ‘community’ is one of the strongest tools we have against violence.   When we come together, we’re stronger and that happens in political settings, in social settings, in support settings so I think that it all ties together.  I run a monthly group for current and transitioning sex workers to get together and share wisdom and support.  It meets once a month.  It’s peer based.  It’s really about bringing up the resources we have within us to support each other in community.”

Siouxsie Q is a sex worker activist and runs a weekly podcast called the Whorecast which works to highlight voices and experiences of sex workers,

“I spend a lot of my time trying to humanize and normalize the profession that I’m in by saying, ‘Hey it’s just a job.’  I am a regular person.  I don’t have a tragic story.  So I spend about 360-plus days a year doing that.  One day a year-and that’s today December 17th– I with my community take time aside to acknowledge the violence that my community faces every day, to honor those we’ve lost, to remember them and to reaffirm our commitment to fight to end that violence.  So December 17th is hugely important to me.”

Other sex worker’s rights activists highlight the link between the dehumanization of their communities and the different forms of violence that is perpetrated against them.  At the San Francisco event, organizers explained that the violence they face is also the violence that has been practiced by police departments that has actually prevented sex workers from staying safe.  This issue was a focus of discussion raised by the US sex worker community at the July 2012 International AIDS Conference in Washington DC.  Sex worker activists pointed to the practice in US cities and abroad where police departments use the possession of condoms as evidence to prosecute individuals for prostitution.  Human Rights Watch-a global independent human rights organization-confirmed the concerns of sex workers in a report that the organization presented at the Conference condemning this practice in the cities of Los Angeles, New York, San Francisco and Washington DC.

That month in San Francisco, the St. James Infirmary-an occupational health and safety organization that provides services to sex workers and their families-made several attempts directed at lawmakers to enact measures eliminating this practice.  UNAIDS also presented evidence to persuade policymakers to implement standards that would force police departments to discontinue this practice.  Director of UNAIDS Michel Sibide addressed the Mayor of San Francisco and the Obama Administration in a letter that denounced the use of condoms, photographs of condoms, or discussions of condoms or safe sex practices as evidence to prosecute for prostitution or prostitution related arrests.  It was in late 2012 that the San Francisco Human Rights Commission facilitated discussions between Human Rights Watch, St. James Infirmary, the San Francisco Police Department, the San Francisco District Attorney’s Office, and AIDS Office that led to the April 2013 police department policy discontinuing the use of condoms as evidence of soliciting, loitering, or prostitution.

Safety concerns also were raised by “Luna” who addressed the nature of the profession including working in isolation,

“Sex workers are often really isolated.  A lot of us work alone and might not be able to be open about who we are in our families and communities so it’s really important to have that community where we can be ourselves and be open and be able to talk about how to keep ourselves safe and how to keep ourselves healthy.  Often that information is lacking and sometimes it can be hard to apply that information when we don’t know other sex workers who are applying it in a way that fits in with our identities and our lives as sex workers.  So it’s an opportunity to get the best of all our community and for us to bring that out in each other.” 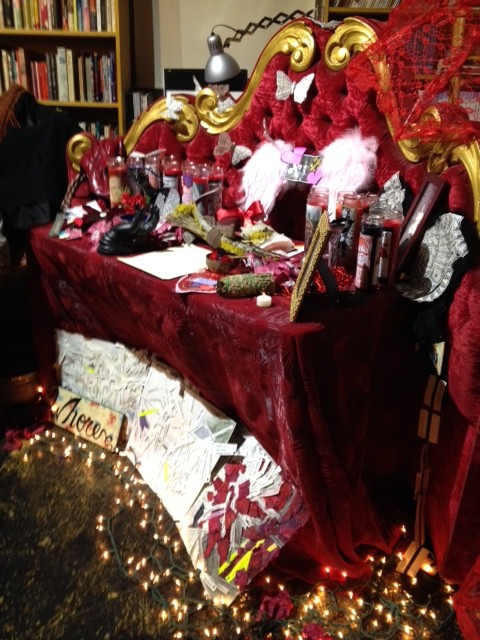 Those working in the sex trade have on previous occasions explained to the press the connection between their community and the LGBTQ and the undocumented migrant community.  Groups report the isolation they experience from the general community, their families, and places of employment.  Carol Leigh or the Scarlet Harlet is the founder of Bay Sex Workers Alliance Network-SWAN and also the San Francisco Sex Workers Film and Arts Festival,

“Sex work is part of an informal economy so certainly there are many people who are migrants who engage in sex work. It’s just one of the many ways you can support yourself when you have to work underground.  So there’s a really big overlap in the community.  To speak to the idea that, as we are not considered citizens either, in that we are criminals and the stigma, it reinforces that.  So we are certainly not afforded the same rights as other people in the same way that immigrants are [not].  And with the rubrics and frameworks around trafficking, what we see is that the trafficking policies impact immigration laws, [and this] impact historically has certainly impacted which immigrants are allowed into this country.  We see within our communities Asian massage parlors are targeted.  Within those parlors there would be many people who are working and basically just want a safer place to work.  And whole immigrant communities are targeted under these auspices so we’re in very linked situations.”

Trafficking policies are often at the core of what some sex worker activists say is harming their community.  They emphasize the inability of policymakers, law enforcement, and some anti-trafficking organizations to recognize or distinguish between forced labor and consensual sex work and by not doing so, continue to harm the sex worker community. “There’s a lot of attention and a lot of focus on trafficking these days, Carol Leigh acknowledged, “A lot of people use the concern about trafficking as a way to campaign against prostitution in general.  A lot of the statistics that are cited [by these campaigns] are really not true, are manipulated to prove a certain point.  I mean even within academic communities and within trafficking policy groups, there’s a great divide.  But in this country all we hear about is the end prostitution wing of the anti-trafficking movement.  But there is another analysis.  There’s an analysis [where] there’s certainly of course concern about forced labor and slavery but at the same time see sex worker rights as essential to the safety of people in general including migrants, including sex workers.”

As sex workers and allies gathered to remember those who have died this past year, they also celebrated a legislative victory in California. On Thursday the California Victim Compensation and Government Claims Board voted to eliminate Regulation 649.56 “Involvement in the Qualifying Crime of Prostitution” in place since 1999 that denied sex workers equal protection from violent crimes.  The new ruling would now allow victims violently attacked or sexually assaulted while engaged in prostitution to be eligible for victim’s compensation.  The new law is expected to take effect early next year following a hearing of public testimony and then an appeal to the California Office of Administrative Law to repeal the old regulation.  Siouxsie Q worked toward the repeal, “That’s a big win because it means that we are seen as humans, as people, as community members, not simply criminals, or not human as we are sometimes classified when it comes to law enforcement.”

Other advancements in the sex worker’s rights movement have been more media exposure as Siouxsie Q establishes with the description of her work, “We’re a weekly podcast devoted to sharing stories and/or voices of American sex workers with the goal of humanizing people who work in the sex industry.  I myself am a sex worker and I’m just obsessed with this amazing community that is welcoming and have been a part of my family and I just want to share with the world. We are a young and vibrant podcast full of hope and community support: thewhorecast.com.  Please check it out.”