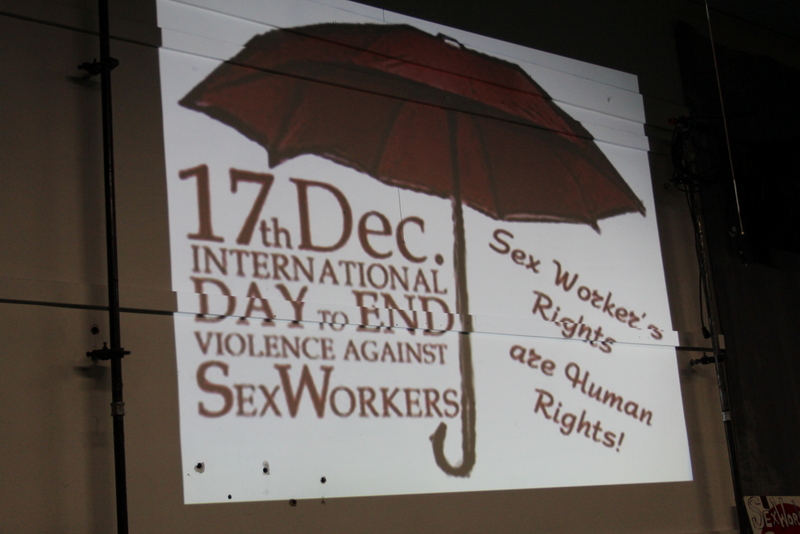 DENVER-Last year the body of thirty-four year-old mother of three Paige Birgfeld was found about 200 miles west of Denver.  Her car had been burned, and her clothes were found separately from the location of her body.  The cause of death has not been determined but investigations into the death determined that she had been supporting her children through working in the sex industry as an escort.

Every year on December 17th across the globe, sex workers, advocates, and their families come together to remember those who have died in the sex trade. The Sex Workers Outreach Project-SWOP of Denver provides resources to sex workers who are at risk for marginalization, stigmatization, and violence. 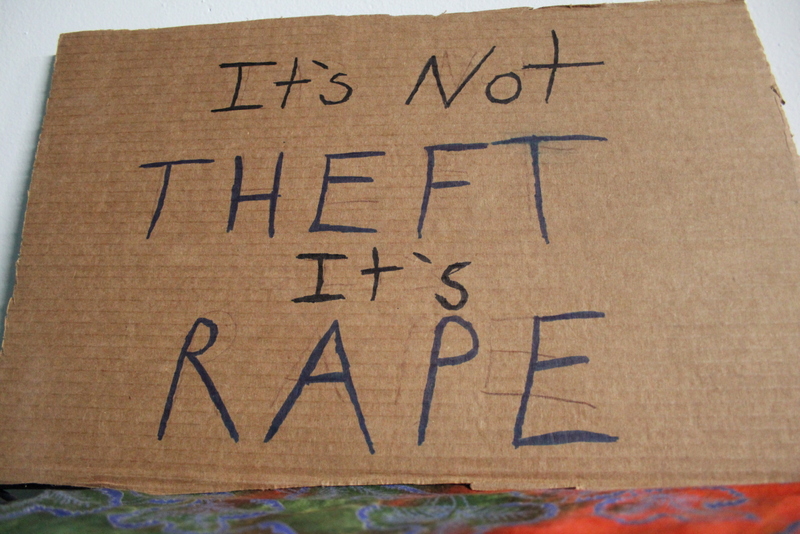 The International Day to End Violence against Sex Workers marked its tenth year on December 17th and its 4th year recognition in Denver.  Members of the SWOP-Denver hosted a gathering that in addition to remembering those in the sex trade also outlined how they are misunderstood and what they need to feel safe,

“So we at SWOP-Denver take a different approach.  We think that sex workers should have a right to safe and egalitarian working environments where we don’t live in fear of being arrested or victimized and that there be non-coercive services for workers who do want to get out of the industry as well.

And we’re really fighting for sex work to be seen as a legitimate job for many individuals with challenges and benefits that need to be addressed like any other profession.

And recent sting operations while advertised by the police department as being really helpful tactics do little else besides traumatized and criminalize sex workers.  In June of this year the Denver police arrested over twenty female escorts and these arrests damaged the livelihoods of workers but the Denver police claimed that their operation was a triumphant success in ending trafficking, preventing illegal immigration, and also preventing terrorism, is what they claim.  For workers who want to get out of the industry, being arrested just really worsens their problem.  If you can’t get a job anywhere because you have a criminal record and you have all these fines to pay for court or as part of your sentence, you can’t really do much else besides do more sex work in order to fix that problem.”

Paige Birgfeld of Grand Junction was reported missing in 2007 but her remains were not found until 2012 about 200 miles west of Denver.

Each year the same list of names is read in other countries such as Cambodia, India, South Africa, Thailand, and Brazil.  Advocacy networks communicate to a central location the names of those who have died in the sex trade.  The list is then shared to organizations in other countries.  This year, the list named 71 sex workers who died-30 in the United States.  The majority of deaths were the result of extreme violence, especially from stabbing but also from dismemberment and mutilation.

Police departments across the nation have come under criticism from advocacy groups who say that sting operations created out of funds from anti-trafficking interests are being used to arrest consensual sex workers out of pressure to produce numbers to satisfy the donors to these groups. 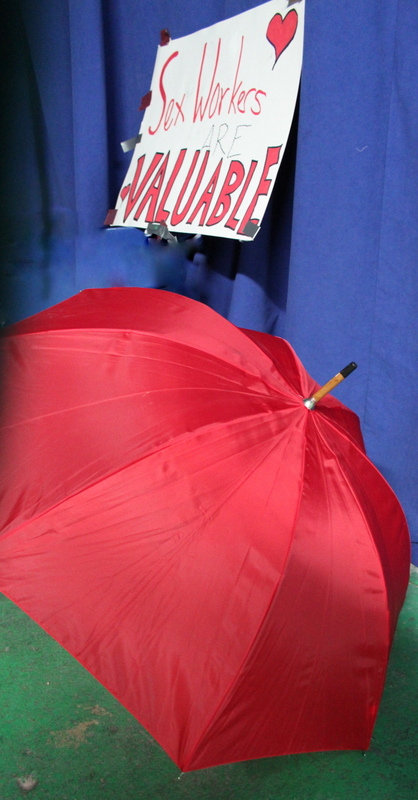 An organizer of tonight’s event whose name we will withhold is an honor’s student at a local university.  She told The Nation Report that she recognizes the violence that is involved in the deaths,

“Last year we read the names aloud and I was one of the people who read the names.  It’s really hard, it’s really triggering.  I did prepare beforehand and compiled [the names] into a list but I think it’s a whole different thing of sitting alone and putting them all together, and then sitting there with a group of other sex workers and just seeing [the names] one after the other.”

When asked to comment on the violence involved in some of the deaths she responded,

“You’re right a lot of the deaths were very violent and gruesome.  People being thrown out of their windows or burned in their apartments and they’re so many of them and we don’t really hear about it in the news or the media.  No one else is really talking about it.  This is a reality that a lot of my friends and my community are facing.  So that’s why we come together on this day to help each other because no one else is going to do it for us.”

When asked to expand on what how she defines media responsibility to address the issue she responded,

“I would just like there to be more attention to violence against sex workers.  Our stories usually aren’t addressed at all and if they are, they’re addressed in really problematic ways.  The media will usually blame sex workers for their own deaths saying that it’s their own fault because they were working in the sex industry or they should have known better. There’s this popular myth that sex workers can’t be raped because they are offering sex as a service for money, then they should be consenting to everything all the time.  So the media just portrays these really horrible stereotypes and really dehumanizes sex workers.  They don’t view sex workers as human beings who are being murdered, who are having their rights as humans violated.” 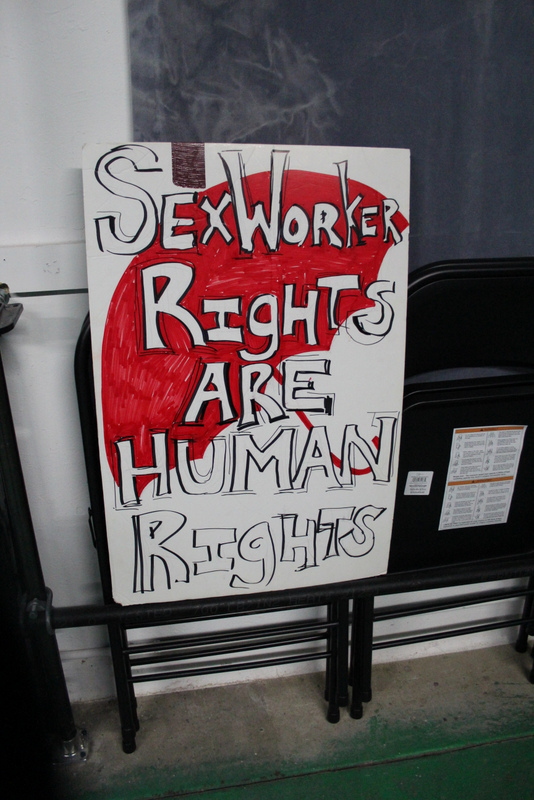 Magalie  Lerman is the Director of Outreach and Organizing at Prax(us) a Denver organization that provides the Denver community with education and resources related to trafficking and also works with the community to conduct its own prevention work.  The group highly focuses on homeless youth who are at risk of or currently are in in domestic human trafficking situations. They say that youth who have experienced abuse, transgender youth, gay, lesbian, bisexual youth, young women, and youth of color are more likely to experience homelessness, and are disproportionately impacted by domestic human trafficking.  According to Prax(us) there are typically 1,135 homeless youth in the Denver area on any given night and that ten to thirty percent of these youth will be trafficked or exploited sexually.  Lerman described her experience on the streets of Denver,

“We do several different types of direct street outreach.  We go to places where homeless young people congregate as well as different strolls or tracks that are popularly worked by sex workers and then sometime we do exploratory outreach. And what outreach looks like is we take backpacks full of survival needs and harm reductions materials, so [that means] snacks , beanies, and gloves for the winter, and hygiene, different condoms, and lube, and we go to these places and we offer resources and referrals if anyone needs connection to any services.”

In 2011, The Nation Report participated in a joint anti-trafficking effort by groups such as sex worker advocacy organizations, sexual health providers, the DU Women’s Studies Department, the Denver District Attorney’s Office, the Denver Police Department, and the Laboratory to Combat Human Trafficking to understand the positions of each of these entities.  While the group dissolved after a year of meetings-the Denver Police Department attended only the initial meetings-groups voiced the disconnect between those in the prosecution entity and those in other entities.  Lerman expanded on her experience with Denver police,

“No I don’t think Denver police are well trained in regards to much honestly but definitely not when it comes to sex workers, and it’s interesting, not when it comes to trafficking either.  I think that there’s a big time conflation of sex work and trafficking. There’s no screening.  Cops don’t do any screenings.  The judges don’t do any screenings.  If there’s diversion programs, they don’t do any screenings either and none of their staff are trained on trafficking.  I think that a lot of the times too that cops don’t have probable cause and there’s a lot of profiling of people involved in the sex trade.  So if they’re not selling sex they still might be arrested for selling sex.  And a lot of times it’s a ‘know-your-rights’ issue and so we try to get out there and arm people with their rights.  And I don’t think anyone feels comfortable bringing any type of assault much less trafficking to a Denver police officer.” 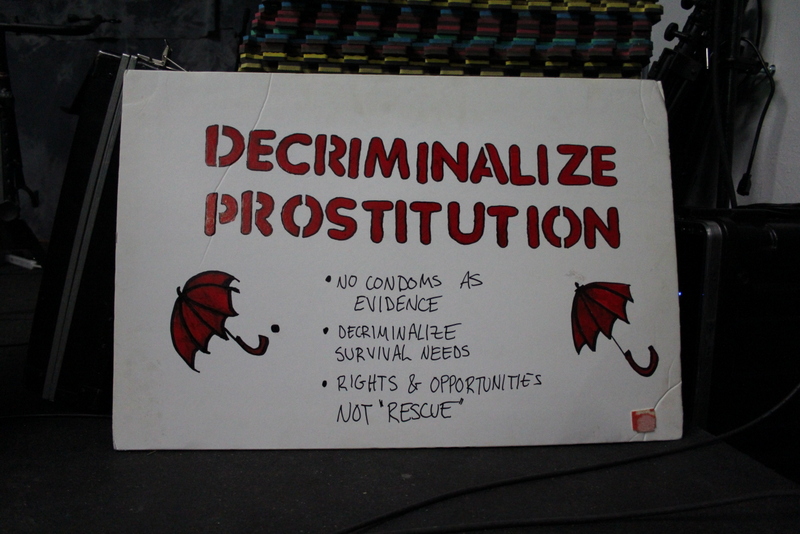 Initial findings of a study conducted by the Laboratory to Combat Human Trafficking at the University of Denver examined the current enforcement of prostitution laws in the city and county of Denver.  The study results showed gender differences in sentencing and arrests in prostitution-related offenses.  Further clients in a sexual arrangement were often described as “everyday men” and prostitutes were viewed as “drug-addicted criminals” or “victims in need of assistance.” The study pointed to how the criminal justice system from arrest to courtroom prosecution “may create and exacerbate vulnerabilities that can lead to trafficking and exploitation.”  The study examined these attitudes in approaching prostitution enforcement efforts and prosecution while including information that supports victims/survivors of human trafficking while restating the need for training, policy considerations, community involvement and additional research. The study supported Lerman’s position as stated in the study’s conclusions,

“National trends have focused on increasing penalties for prostitution activities as a mean to curb instances of human trafficking.  In a climate where the law does not differentiate between buyers and sellers of commercial sex, the vulnerable population on whose behalf these efforts are meant to support can actually be made more vulnerable due to the severe and generalized criminalization of prostitution activity.” 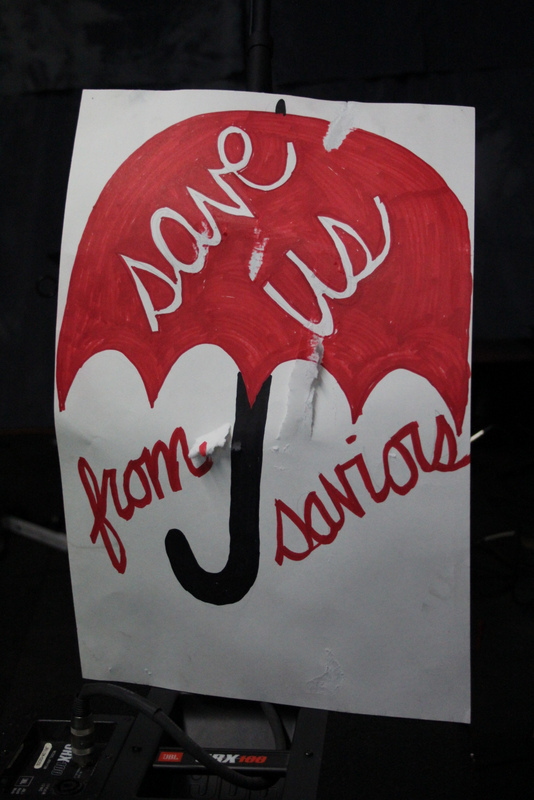 Matthew is a sex worker in Denver and Tucson and attended tonight’s memorial,

“I’m really glad that we get together every year to mark this day and remember the people who have been killed and who have suffered violence because of the work that they do and because whores are stigmatized and devalued.  And I think it’s really important to stand up and be counted and to remember our people who have fallen to say that we love them.  And I know that as a sex worker that I’ll be remembered and cared for when I’m gone too so [gathering] is really important to me.” 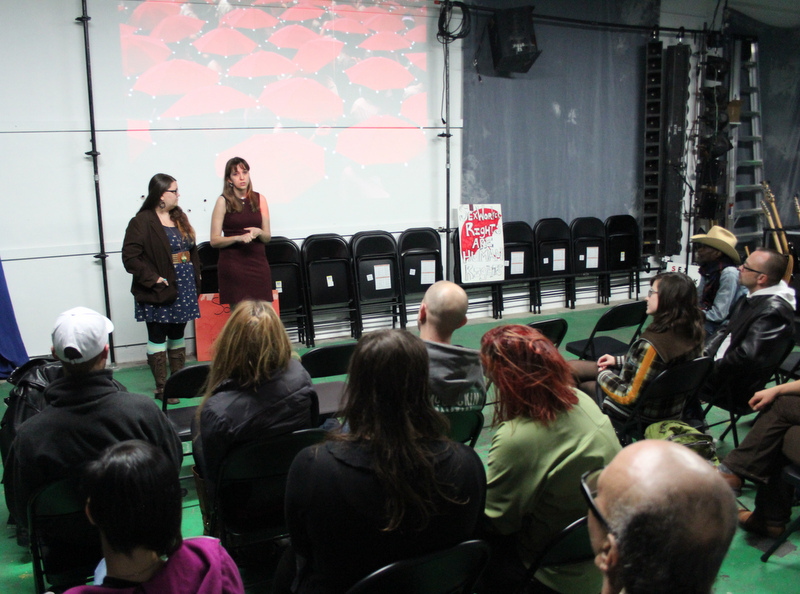 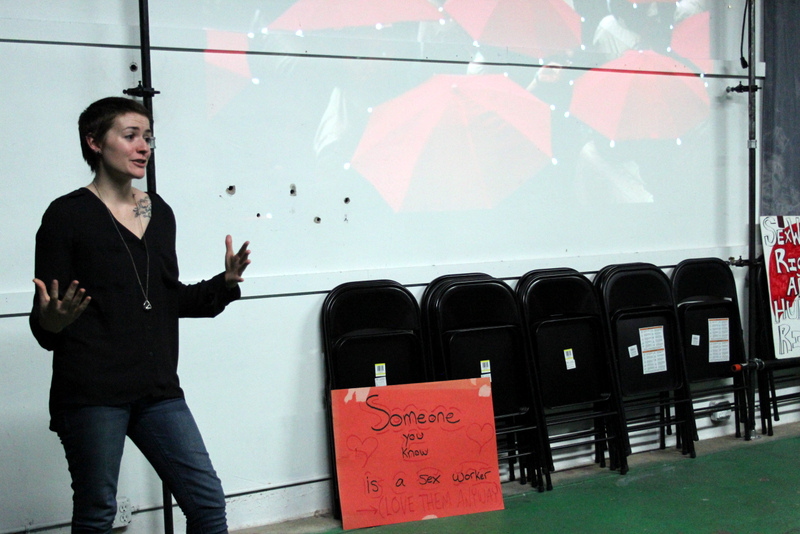 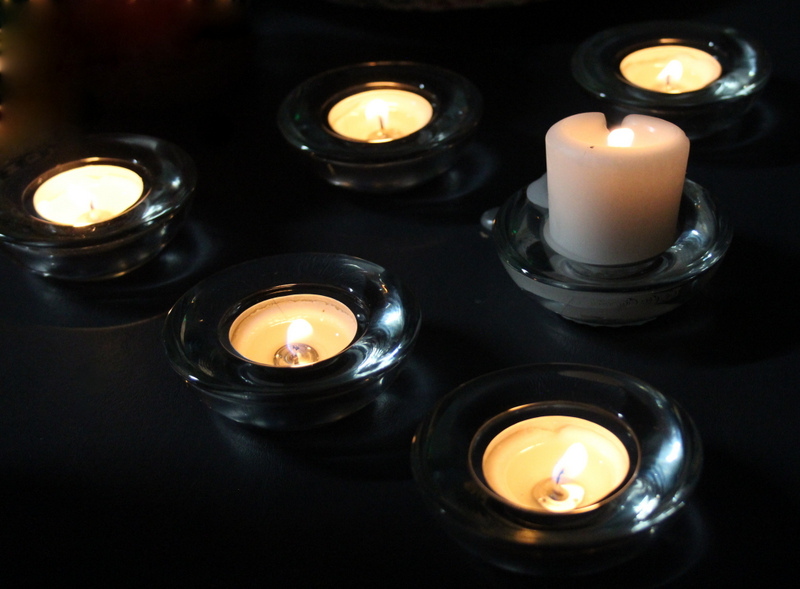 The list of names of those who died this year and details of their deaths: