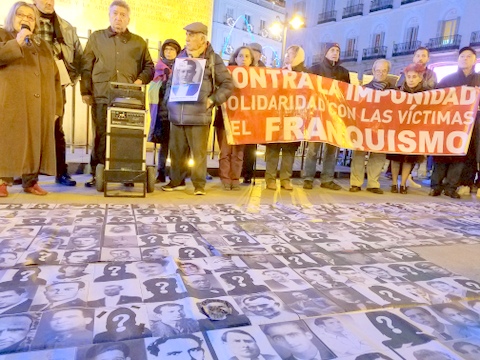 “The grenades that were used at the Centro de Menores was an act of terrorism, AN ACT OF TERRORISM of the far right.”

MADRID – These were the words of organizers who are working to prevent the country from falling into totalitarianism again, and to prevent repeating a dark point in Spain’s history.

The reference to Thursday’s act of terrorism was about unknown individuals who threw a grenade into a compound in Madrid used to shelter migrant children, and Spanish children who have lost their parents.  A representative of the national police force reported no physical injuries and was detonated by personnel outside of the shelter.

Before today’s incident, every Thursday the survivors and the victim descendants of Spain’s 20th century military dictatorship under Francisco Franco have been meeting at the Plaza de Sol in Madrid to remember loved ones.  They gather to remind others of the human rights abuses he imposed on those deemed opponents to his rule.

It is estimated that over 100,000 were killed during his reign.  Many of the abused were innocent civilians leading many historians to consider the era a genocide.

In power from 1939 to his death in 1975, Franco’s early years employed totalitarian tactics that repressed his opposition, including those identifying as Republicans-or those loyal to the Spanish Republic.

Documented cases of severe abuse by state actors included mass executions where victims were dumped into mass graves. The Association for the Recovery of Historical Memory (ARMH) has completed excavations that have unearthed those executed after the war.  The organization estimates that number to be between 15,000 and 35,000 over the 100,000 estimate.

It is even said that upon Hitler’s Heinrich Himmler visit to Spain in 1940, he expressed shock at the brutal capabilities of the Falangist political party in power under Franco.

What brought survivors together at this point in time is a move by the recently elected Madrilenian city council – now made up of members of the conservative Popular Party (PP) and center-right Ciudadanos (Citizens) – to cease construction of a memorial project that listed on plaques the names of 3000 Republicans killed during Franco rule.  The plaques were part of a memorial project that was being built in La Almudena cemetery in Madrid.

The project was begun under the municipal government of then mayor Manuela Carmena, considered a socialist, but construction only lasted two months when the conservative members took control.  In July 2019 the project underwent demolition thereby destroying the engraved names of the deceased and contributing to further trauma experienced by survivors and descendants.

During Thursday’s gathering, popular muralist Juan Chica Ventura from the Association 24 of August – the day in 1944 when Paris was liberated by the Nazis by those who included exiles from Franco’s regime –  read a petition that the group is presenting to the current municipal administration titled “Madrid Dies Again.”  In part the letter recognized the 2937 victims that were fatally shot in Madrid from 1939-1944.  The petition also outlined the other governments and administrations that have memorialized those of the era who were fighting for peace, “For that reason we demand that the memorial plaques be restored so that we can remember those who gave their lives for liberty,” Chica Ventura read.

After Franco’s death in 1975, an amnesty law recognized in 1977, freed political prisoners but also provided immunity for war crimes by perpetrators.  This so called “pact of forgetting” erased details about the era from historical memory because the press was prevented from reporting and schools were prevented from teaching about the subject.  To this day, youth can recite little about this time in history. 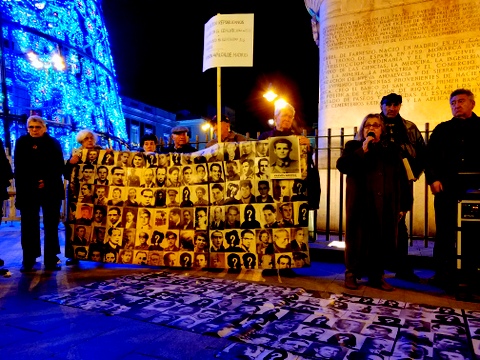 Survivors call out to the Spanish government and international observers to work for an end to impunity for those responsible for the deaths, injuries, and disappearances of their loved ones. The sign held reminds the public of the 3000 names of opponents to the Franco regime who would have been memorialized on the plaques.

The group intends to form a commission to draft an Act of Repugnance so that attempts to erase this history don’t happen again. “This is not something from the past that we are fighting against, this is something of the present.”

Some names still visible on two plaques that were not completely destroyed: