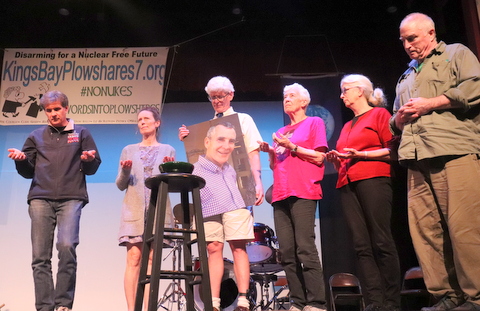 BRUNSWICK, Georgia – Known as the Kings Bay Plowshares 7, seven peace activists are on trial after being arrested in 2018 for entering the Naval Submarine Base Kings Bay in southern Georgia.  The group say they wanted to “nonviolently disarm nuclear weapons.”

The seven chose to carry out their action on April 4, 2018, the 50th anniversary of the assassination of Dr. Martin Luther King Jr. they say, as a symbolic gesture to address King’s statement against the “triple evils of militarism, racism, and materialism.”

The activists entered Kings Bay nuclear storage bunkers, the Strategic Weapons Facility Atlantic Administration building, and the Trident D5 monuments where they left crime tape and poured their blood from baby bottles onto the property.  They hung banners that read: “The ultimate logic of racism is genocide – Dr. Martin Luther King”, “The ultimate logic of Trident is omnicide” and “Nuclear weapons: illegal / immoral.”

Similar actions have been taken by themselves and other peace activists for decades across the country, also in attempt to raise awareness about the potential dangers of nuclear arms and for a ban on nuclear weapons.

The group has been open and public about their preparation and intention since their arrests, acknowledging step-by-step actions that they took.  And each has expressed a knowledge of the risk of arrest and judicial ramifications that could follow.

All face up to 25 years on three felony counts and one misdemeanor:  conspiracy, trespass and destruction and depredation of property. 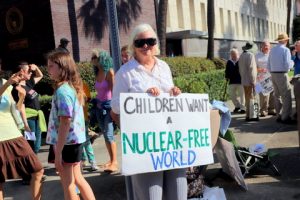 Fellow activist Paki Wieland traveled from Washington DC to support the Kings Bay Plowshares 7 with whom she said she has joined in other actions at different locations as a “co-conspirator,”  as her way of denouncing the conspiracy charge.  Weiland took issue with common interpretation of the term, “It’s certainly been used more lately as this terrible thing that people conspire together to do bad things, but the root of conspiracy is ‘breathing together.’  And that’s what I feel this community of resistance is doing.”

Weiland has participated in a Witness Against Torture action with defendant Martha Hennessey, and with Clare Grady having been arrested for resisting drone warfare at the Hancock Drone Base in Syracuse, New York.

“I see it as much beyond what we’re seeing right now.  It’s everybody here supporting them.  It’s every one of our communities of resistance back home.” 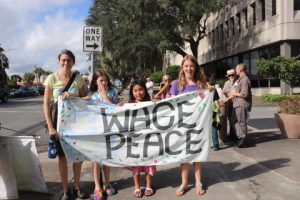 Trident missiles were originally developed by Lockheed Missiles and Space Corporation, and in 2002 the US Navy awarded Lockheed Martin Space Systems-Missiles & Space Operations a $248 million contract for production of 12 TRIDENT II D5 Fleet Ballistic Missiles (FBM).  This was the start of several similar contracts to be awarded for production of more D5 missiles and for the retrofitting of existing missiles. 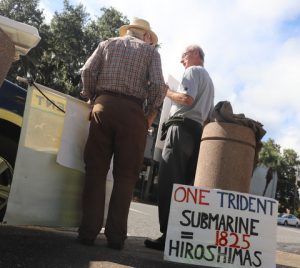 Wood also ruled against the use in trial of the necessity defense where a successful defense can show that breaking a law is necessary to prevent a greater harm.

Successful to the defense was the ruling by the court to allow attorneys and defendants to talk about the danger of nuclear weapons.  Defendants will also be allowed to talk about motivations.  In August the judge heard from defendants about their religious convictions, and their commitment to peace in a two-day hearing.

Several young people participated in courtroom support, “These are the elders in my faith,” explained Chrissy Nesbitt of Durham, North Carolina, “They have instructed me on what it means to be a person of conscience and I want to be here for them to show how much they’ve inspired me, and how much I value the action that they’ve taken.”

A joint statement issued by the group explained their actions:  “Nuclear weapons eviscerate the rule of law, enforce white supremacy, perpetuate endless war…and ensure impunity for all manner of crimes against humanity.” 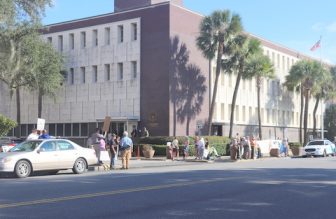