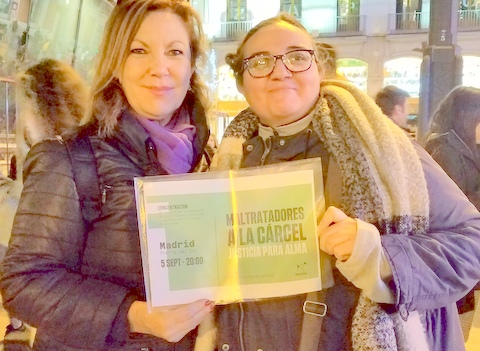 MADRID – After the alleged brutal attack by a Spaniard on his own dog, animal rights activists are calling on the Spanish government to impose stricter penalties on animal abusers.

A viral video posted on social media revealed the attack as it was happening on Saturday in Chantada, a village in the northwestern province of Galicia.  Two passersby, Ramon Feijoo and Virginia Gonzalez heard a gunshot and then stopped their car.

The video footage filmed by the two showed the attacker dragging his dog by a rope after having shot her, according to Rof Codina, the animal hospital where the injured animal was later taken.  She suffered a bullet wound, injuries to the skull from strikes to the head (assumed to come from the stick the attacker carried in the video), and skin contusions from being dragged along the road.

“Alma,” as she was named by caretakers, had just given birth to a litter of six.  The mother survived for two days, but died on December 5 at the animal clinic in Lugo, Galicia.

In the footage, the two passersby can be heard defending the animal and questioning what the man was doing “what you are doing is inhumane.”  But the man replied that he was a hunter and “I can shoot whatever expletive I want.”

‘We heard a shot and then a dog barking and saw this man with a gun.  He said he was taking the animal home, that he was a hunter and that he could do it.  When we said we were going to call the police he started to drag it along the ground with a rope round its neck.  My husband began to film him because we didn’t know what was going to happen.”

Animal advocates went into action by organizing mobilizations across the country.  The political party PACMA turned out dozens in multiple cities  across Spain on Thursday.  Madrid police didn’t allow the many who showed up to the Plaza del Sol to mobilize, so the group walked individually or in pairs carrying signs in support of the dog. 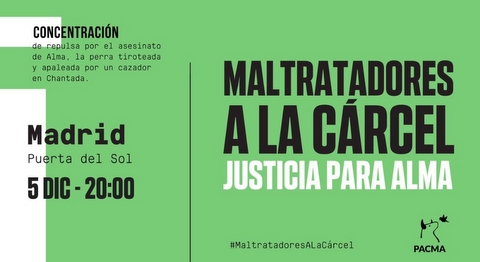 Those interviewed said that because of Spain’s weak animal rights laws, that the accused is expected to only receive a limited fine.  His gun has since been confiscated.

Members of the animal rights group ALCALA de Henares (ADH) defended their right to protest to police, but eventually agreed to carry signs across the plaza in small groups. “I haven’t seen the video, said Carolina of ADH,  “I don’t want to see the video because it makes me shake, the pictures.”

Gema, also of ADH said that the group works to surpass other countries such as the UK and Germany in advancing humane animal protection laws.

The two wanted to proliferate the message across continents that they will continue to fight for the lives of animals, “They are living beings.”

Laura Duarte, President of PACMA, published a statement saying, ‘The revulsion and rage these images make me feel is indescribable.  In this county this savagery is not always punished by way of a prison sentence. We are fighting against that.  In the next few hours we will be informing you about the action we intend taking.”

One action the group is taking is to call for tougher penalties for animal maltreatment and to rid of impunity for abusers.  The organization wants revisions to the current Penal Code that they detail below:

As recently as November, another case was reported in Mazarrón where three dogs who lived on a farm were shot by two hunters.

A separate action taken by PACMA has been in the form of an online petition.  The petition is asking for “everyone’s cooperation so this crime doesn’t go unpunished and the full weight of the law falls on this madman.”  As of Thursday the petition had received over 180,000 signatures.

The puppies are reported to be in good health.

One of Alma’s puppies. The animal rights organization Otros Mundos said it would be reporting the incident to police and would be taking legal action. (Photo: Mundo Vivo)

If you’d like to view the petition, you can see it here: