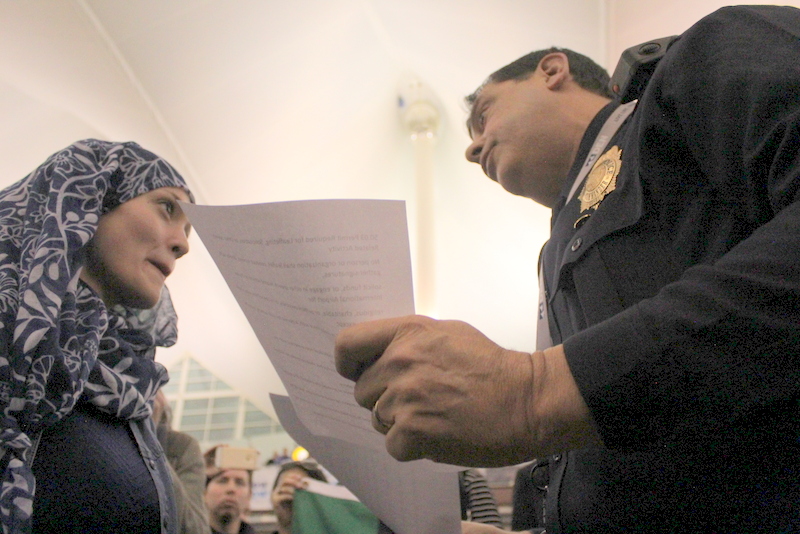 Commander Tony Lopez orders Amal Kassir to stop First Amendment activity as she waits for her friend to arrive to the DIA international arrival’s gate.  (photos:  The Nation Report)

The City and County of Denver, Denver Police Commander Tony Lopez, and Denver Police Sergeant Virginia Quinones have all been named in a lawsuit filed Monday that is challenging the authority of the city and of the Denver Police Department to arrest people for First Amendment activity.  An injunction motion was also filed related to the suit.

Plaintiffs Eric Verlo and Nazli McDonnell, members of Occupy Denver and represented by attorneys David Lane and Andy McNulty, arrived at Denver International Airport (DIA) on January 29 for a second day of protests after President Donald Trump issued an Executive Order that permanently bans Syrians from emigrating to the United States, and temporarily bans those of six other countries with significant Muslim populations.  Tens of thousands across the US protested Trump’s order and in support of immigrants and travelers at airports in several major airports following the executive order.

Verlo and McDonnell said in the suit that Trump had gone “too far” in targeting these populations, and were drawn to the airport to show support for those arriving at the airport.  Police ordered demonstrators out of the airport, but Verlo and McDonnell chose to stay saying that their message would be heard by far fewer people outside.  Lopez and Quinones then threatened arrest, but McDonnell and Verlo remained in place.  Verlo in particular has challenged the city of Denver with other alleged First Amendment violations including the right to demonstrate at Denver’s Lindsay-Flanigan courthouse, and the right to pass our jury nullification materials outside of the courthouse.

At a similar protest at DIA the day earlier, Lopez also threatened arrest of those who were holding signs and singing.  Lopez cited DIA regulations – specifically Regulation 50 – that prevented them from First Amendment activity without having applied for a permit seven days before.  Regulation 50 says that “No person or organization shall leaflet, conduct surveys, display signs, gather signatures, solicit funds, or engage in other speech related activity at Denver International Airport for religious, charitable, or political purposes, or in connection with a labor dispute, except pursuant to, and in compliance with, a permit for such activity issued the the CEO or his or her designee.”

Selective enforcement of the provisions is the main focus of the lawsuit.

While protests took part at other airports, protesters reported that airport staff at other airports told protesters that there were no limits to their speech and that all peaceful protests were allowed.  According to the lawsuit, this was true in Kansas City, and also as reported by The Nation Report in Oakland. 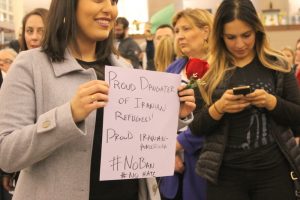 Other issues of selective enforcement include sign holding.  The suit questions why the same enforcement or arrest threat isn’t applied to those who hold the name of someone holding a “welcome home” sign with someone’s name, or further for “holding a sign and soliciting passengers for a limousine without a permit within the Jeppesen Terminal at Denver International Airport.”  The same question was raised by state Representative Leslie Herod at the earlier protest,  “Do you tell everyone who is here greeting their friends that they have to put their signs away?”

At that protest, Commander Lopez gave protesters the option of holding their signs six miles away from the airport on Tower Road but not within the fifty square miles that made up Denver International Airport property, and that those present could not hold signs, sing, or even speak to each other about matters of public concern.  One protester who was waiting for a passenger at International Arrivals was told specifically he could not hold his sign that bore a quote from the First Amendment of the Constitution.  The lawsuit states, “Upon information and belief, no individual has been arrested, or threatened with arrest for discussing current affairs with another person without a permit within the Jeppesen Terminal at Denver International Airport.”

The suit further states that:

Denver International is a public forum.

Regulation 50 infringes upon and chills reasonable persons from engaging in First Amendment activity.

Regulation 50 is unconstitutional because requiring a permit is in itself a restraint on speech, and that the regulation requires advance notice that is “unconstitutionally excessive.”

Verlo said in a statement on his website, notmytribe.com, “Applying for permits sets a bad precedent. Asking for permission implies those rights are not already protected by the First Amendment. Permits also restrict others to the code of conduct agreed by those who signed permit agreements. Often permits are used to exclude public participation on public grounds temporarily reserved for the use of the permit holder.”