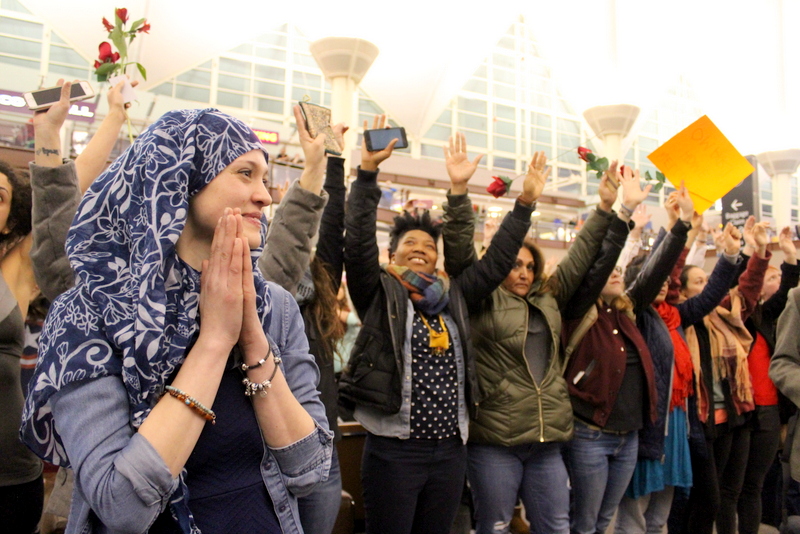 A national call to action led several in Denver to organize by social media a response to to Friday’s executive order by President Donald Trump to ban entry of those from Muslim-majority countries.

In its first moments, about a dozen people walked from one end of Denver International Airport (DIA) to the International Arrival Gate.  Within seconds a hundred people gathered, and within minutes over 500 gathered. 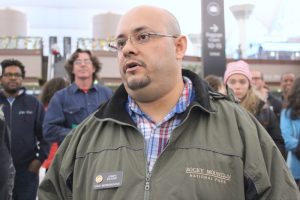 Colorado Representative Joe Salazar said that he helped organize the direct action, “We will not aid and assist the federal government in establishing internment camps, any type of registries.  We will not physically or electronically identify based on their religion or national origin.  And we will not aid and assist the federal government by providing them information that they intend to use for unconstitutional and illegal purposes.  People have stopped what’s happened at [John F. Kennedy Airport] because refugees have been detained over there, and they said, ‘We’re not going to go anywhere until you release those folks.’  This is a rising of people to help protect their neighbors, help protect their families, help to protect their friends, help to protect humanity.”

Signs read in support of immigrants, and read, “NO BAN, NO WALL,” “LET OUR FRIENDS IN,” and “Welcome Home, Omar,” a reference to the person who was one reason an organizer, Amal Kassir called people to the rally.  Kassir’s friend Omar was on a plane due to arrive at DIA later that evening. 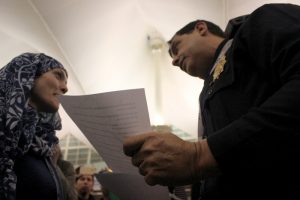 Initially Denver Police headed by Commander Tony Lopez attempted to shut down the protest citing First Amendment limitations at DIA, but several challenged his assertions.  Supporters of immigrant rights yelled from the crowd that they had the right to stand at the gate to wait for Omar. 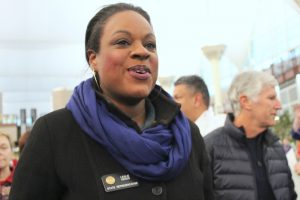 Security along with Lopez threatened arrest, but when it was made obvious that people were willing to risk arrest, police reneged and said that they would only arrest people who were holding signs.  Colorado Representative Leslie Herod questioned, “Do you tell everyone who is here greeting their friends that they have to put their signs away?”  Lopez responded, “Based on the legal information we’re getting at this time from the City Attorney, what’s being displayed is in violation of airport rules and regulations.  Put all the signs away that have anything to do with First Amendment expression.”

Arian Noorzai,  CEO of March for Humanity held a sign that read, “Welcome Home Omar!” but also read from the Constitution on the reverse side of his sign.  Noorzai told The Nation Report, “We just happened to have a friend named Omar flying in today, so we were going to be in the airport.  At that point, we heard about the ban on immigrants in correlation with the three main organizers of this protest.  We decided to decided that we might as well express our love, and remember the Constitution while we’re here at the same point. 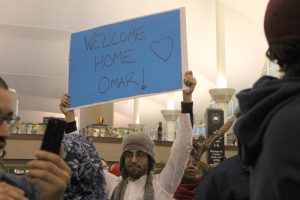 I was told by a security officer that I need a permit to carry the constitution.  We were threatened by both the police and airport security that we would be arrested and/or detained if we came here without a legitimate reason.  So he’s our legitimate reason.”

When police announced that they didn’t believe that everyone was there to greet Omar, the crowd shouted, “Welcome home Omar!”

Amy Emory Brown, member of Black Lives Matter 5280 stood at the front line of the protest as people locked arms preparing for possible arrest and told The Nation Report that police were traumatizing members of the crowd, “For people of color to see how we’re treated by folks who walk around with guns and badges to stand in spaces completely surrounded by law enforcement who is on camera everyday brutalizing us, on camera everyday dehumanizing us, denying our right to exist, this is a traumatizing experience.  This is a triggering and terrifying experience because of the realities in how they view us and how that allows them to treat us.  This is not an easy exercise for people of color to know that our family is being detained as we speak when we know the things that happen to detainees, let alone Muslim detainees and detainees of color.  This isn’t cute.  This isn’t fun.  These are real issues. 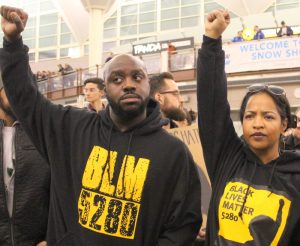 Amy Emory-Brown (r) said that the police presence was a waste of resources and traumatizing for people of color.

Within minutes, people began a moment of prayer that drew initial attention by police, but the crowd yelled ,”Let them pray! Let them pray!” and surrounded the prayer area.  The prayer session continued until its end. 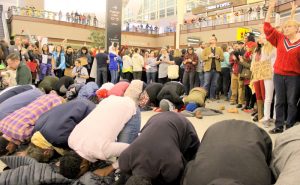 Police then offered a protest space at Tower Road, miles away from the airport, but later reneged on that offer by telling protesters that they would be allowed to protest on the Plaza area outside of the glass doors to the airport.  The hundreds filed out and continued the protest in the plaza area. (see video below)

Nathan Woodliff-Stanley, Executive Director of the American Civil Liberties Union of Colorado (ACLU) said that the ACLU and other organizations had already filed a suit against Trump’s executive order on the premise that the order violated the “establishment clause” of the First Amendment, and the “equal protection clause” of the Fourteenth Amendment, “People standing up like this is going to be extremely important.  We can’t let something like this just pass by unnoticed.  This is a country for every religion.  We specifically do not favor one religion, or one group of people over another.  This is a country that has rights for everyone, not just for some people, and we need to live like that country, not in the way of [Trump’s] kind of an action.” 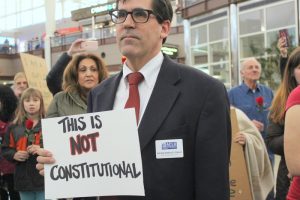 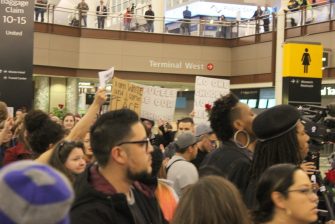 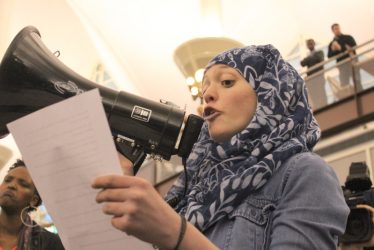 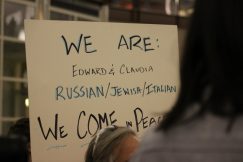 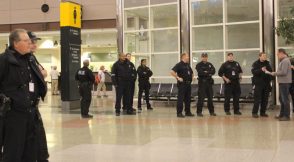 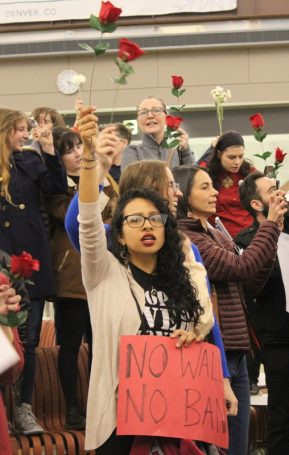 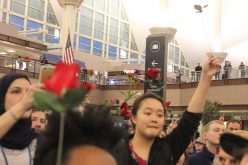 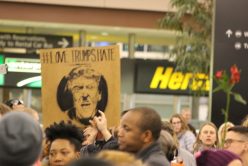 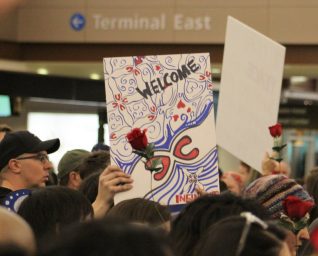