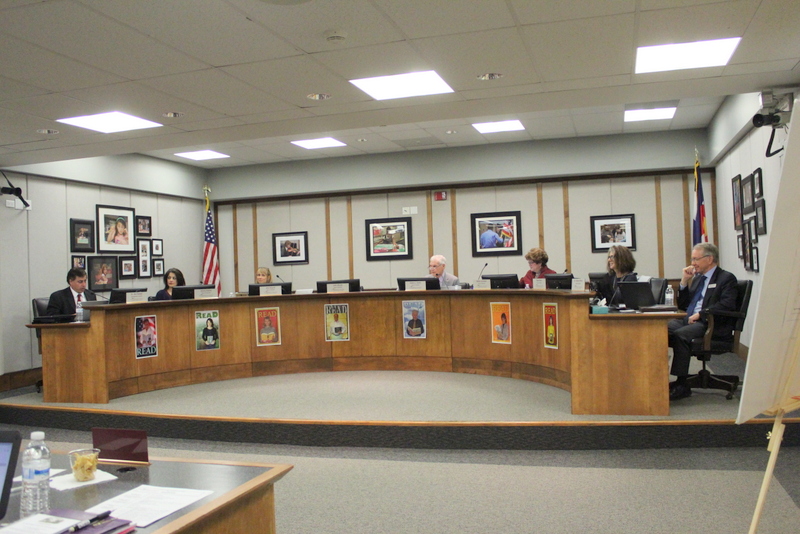 St. Vrain Valley School District Board listens to public comment against allowing field trips to Rocky Flats on May 10, 2017. (all photos: The Nation Report)

“The chance of other parents not being informed about this and not opting out of a field trips, or maybe a high school student doing a research project in that area, sounds like too much risk to me.  And so I also would like the district to put this in writing.”

Marissa Tafura is the parent of a pre-school student in the St. Vrain Valley School District (SVSD) who spoke at a school board meeting three weeks ago and attended again Wednesday at its regularly scheduled meeting, “And when I learned that they only cleaned six feet below the soil [at Rocky Flats] and that there’s 18 species of burrowing animals like prairie dogs that are bringing soil up to the surface, I really could just imagine the potential risk that [my child] could encounter while playing actively outside.”

Although not taking credit for the decision, SVSD Board President Bob Smith told a standing room only crowd at the meeting that no school trips to the former Rocky Flats Plant would be authorized.

From 1952 to 1989 the US Department of Energy (DOE) produced plutonium pits for the US nuclear arsenal.  Rocky Flats operated under the supervision of the US Atomic Energy Commission (AEC) and later by the US DOE.  Following a series of explosions and years of high-profile protests against Rocky Flats, the facility eventually closed in 1992.  A clean-up effort began soon after, but those from organizations who have closely monitored the effort say that a clean-up is impossible given the level of radioactivity, and that the area should be closed off permanently.

Even housing construction close to the site in the Candelas neighborhood was met with resistance when informational sessions and protests hoped to at least raise awareness, if not prevent any construction so close to the former plant. 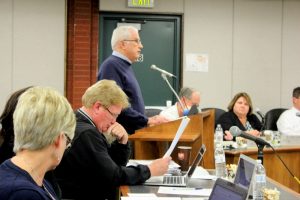 Dr. Gale Biggs tells the board of SVSD that Plutonium moves both vertically and horizontally and therefore migrates to the surface which schoolchildren could then breathe while on a school trip, if field trips were not banned to the area.

During the public comment section of the SVSD meeting, Dr. W. Gale Biggs spoke about the Plutonium-239 that was used at the plant to produce the triggers used in the bombs.  Biggs told the board that the airborne emissions were the most dangerous and that the Department of Energy failed to clean up the Plutonium-239, “DOE simply imploded the buildings, without cleaning out all of the Plutonium-239 and then covered it with 6 feet of dirt, and called it cleaned up.”

Fennerty pointed to a DOE map of Rocky Flats and the location of what is still a Superfund site, “It’s not a stable site.  Whatever is here is going to go into the surrounding area.”  She pointed to buildings that contained beryllium, plutonium, and uranium that were simply buried, “They’re getting into the creeks, the groundwater and being dug up by prairie dogs that go down 16 feet.  Under six feet, there [was] no cleanup.”

Fennerty said that the whole area was originally dedicated a Superfund site.   That area is a ten square mile site, or 1,300 acres, and Fennerty pointed to an area on the map,  “This is the worst spot.  It’s still a Superfund.  Unfortunately it’s not a stable site.”  She pointed to the center of the map, “This is the original landfill.  It’s a huge ravine that is 40 feet – four stories deep – and twenty acres.  It’s enormous.  It has not been closed according to the environmental laws which tell you how to close these landfills, only a couple of feet of dirt.  It’s sliding all the time and it’s a major problem.  There are also sprayed fields around here where stuff was simply sprayed into the ground.  This is part of the 903 pad where thousands of 50-gallon plutonium-containing waste is soaking into the ground.  The remaining materials are not safe.  The creeks, the groundwater, prairie dogs, plus floods and winds will carry a lot of this contamination into the wildlife refuge.”

Board president Bob Smith said that the school board was not a “policy governance board.”  Smith added that the board sets policy guidelines, principles, and then gives full authority to Superintendent Don Haddad to oversee, “Specifically with regard to tonight I would point out that the Superintendent has directed on his own behalf in the interest of the safety of our students, has directed the Assistant Superintendent of Operations not to take any field trips to Rocky Flats.”

In addition, Haddad assured those concerned that there have not in the past been field trips to Rocky Flats.

Trista Gage is a parent and lives in Longmont and said that she had signed up to speak about the issue, but was not allowed.  The words coming from the School Board didn’t particularly satisfy her, since the decision didn’t seem to be a policy decision that future generations could look to and reference, “I’m just concerned that they’re not willing to have something in writing.”

Gage said that when she first heard of the ongoing dangers of the site that she began doing an internet search of Rocky Flats,  “If you Google it, the first thing that comes up is it says, “Rocky Flats is the Most Toxic Waste Site in the US.”  So I guess my concern is, ‘Why there would ever be any consideration of children in particular visiting the site.’  There’s lots of language about how the EPA says it’s safe and the Wildlife Department says its safe.  As a parent  I don’t think any level of exposure to any kind of radioactive materials would be safe for kids and I would feel more comfortable if there was something in writing from the school district prohibiting any this year, next year, or ten years from now.  I think there is plenty of other natural areas in Colorado to visit.”