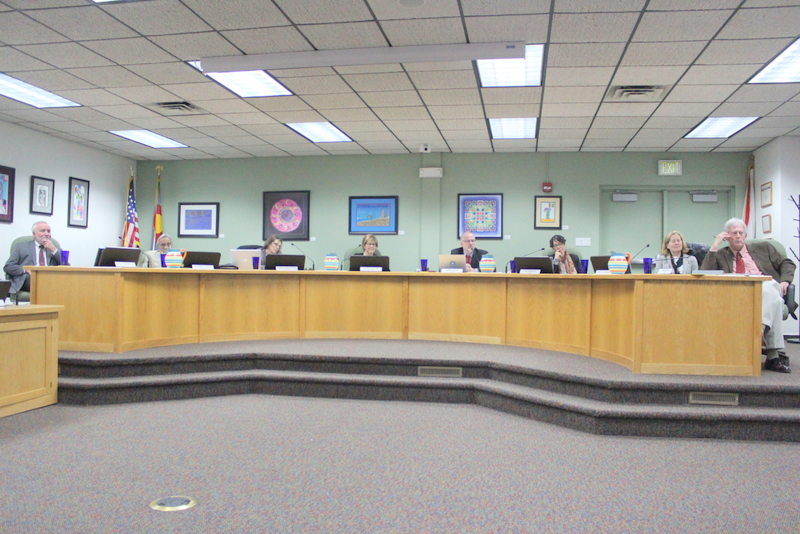 The Boulder Valley School District put the brakes on school kids being exposed to plutonium particles that are left behind from the former Rocky Flats Nuclear Weapons Plant.  In a late night vote, the board decided unanimously to prohibit field trips to the site, with one board member adding a “thank God” to her vote. 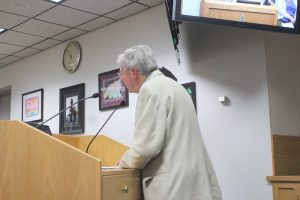 In a crowded meeting, parents, school children, and teachers were educated by speakers who have been studying the former nuclear bomb trigger construction site for decades.  One speaker was Harvey Nichols (photo left) who was commissioned by the US Department of Energy in 1974 to study airborne particles at Rocky Flats, “What I found shocked me.”  Nichols studied snowfall at Rocky Flats and said that the site has routine evidence of plutonium particles, “In studying those particles microscopically, it’s clear to me that they’re of the size range that would be easily inhaled.  It’s inevitable that people will be exposed to some degree to those particles which of course could be potentially fatal.”  Nichols criticized the minimizing of risk promoted by the Environmental Protection Agency (EPA) and advocated for elevating the work of scientists who operate purely independently from the EPA on Rocky Flats, “But when you look critically enough at what they’re saying, and bring in external independent scientists who are not paid that promote the party line, then you get a different picture.  I ask you not to allow this gamble to go ahead.”

Anne Fenerty, a chemist brought maps to show some of the contaminated areas of what is remaining of the plant which she says was never properly cleaned up.  A member of the Citizen’s Advisory Board for the closing of the nuclear weapons plant, Fenerty showed maps of tunnels that still hold radioactive waste and areas of basements of contaminated buildings, “The orange and the yellow are the basements left in the soil of some of the most contaminated buildings because most of the buildings went underground.  I would like to point out that there is also an enormous upland here that was a huge wasteland called original landfill.  It’s 40 feet deep, that’s four stories deep.  And it’s two acres and it’s leaking. It hasn’t been properly closed according to the rules of closure that were supposed to happen.  It’s contaminating the creeks.  There are creeks that you can see here that are underneath here.   So we are talking about an area that is extremely dangerous.  It’s still a Superfund site.  It’s in the middle of a wildlife refuge.  This is where children are supposed to be recreating.  The creeks, the groundwater is contaminated.  I just want to point out that this is not a site to have children recreate at.  The soil has not been cleaned under six feet.  Everything’s remaining.  Prairie dogs bring it up and children are there.” 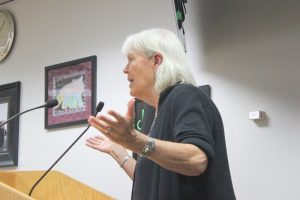 Judith Mohling (photo left) has two grandchildren enrolled in BVSD,  “I would never in a million years let them go out to Rocky Flats.  I’ve always been worried about Rocky Flats.”  Mohling conceded that the area is beautiful and said she could understand the seduction that draws people to the area but, “I always hold my breath when I drive by.  When you consider that thousands of burrowing animals and thousands of insects burrow down at least 20 feet and bring up soil by the ton every year, and then 100 mph winds scour Rocky Flats, you can imagine the fact why there is still plutonium at Rocky Flats and always will be because nothing under 6 feet was touched.  Buildings were imploded, everything was buried and then animals are bringing up all of that plutonium.”

Among gasps from teachers and parents in the audience, some of whom were hearing the information for the first time through public testimony, those responsible for bringing the issue to attention of the board left the meeting pleased with the vote.  Michelle Gabrieloff-Parish is the mother of three children in the BVSD school system and responded to the vote, “It was clearly the right thing to do.  I’m excited as a mom, and I’m really excited as an activist who’s been trying to take a stand.  When there’s so many other places here and across Colorado, why go to one that is a Superfund site?”