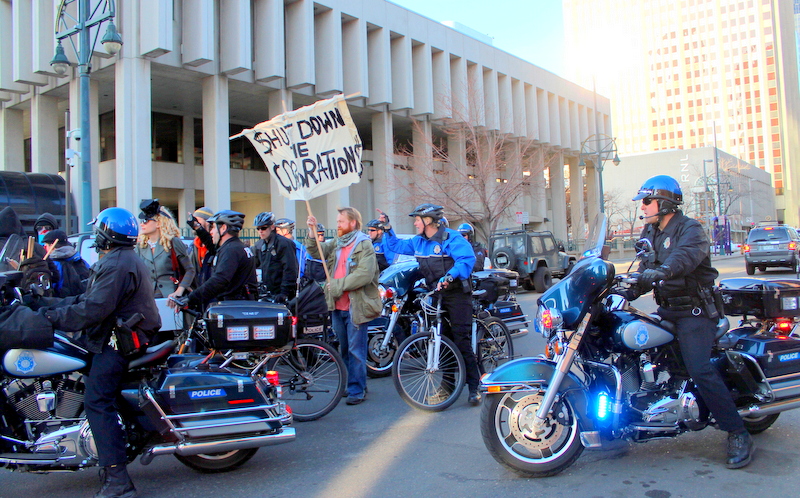 In the US, the criminal justice system is Big Business. Our high rates of stops, arrests, and incarceration eventually leading to most civilians plea-bargaining and paying substantial fines and fees reveal a business as usual approach. In the last several decades the fear factor and anticipation of crime, which co-expanded with the War on Drugs, has paved the way for  industries and corporations to profit from the politics of crime. What many don’t realize is how municipalities and our government are in bed with these corporate interests.  Together they engage in propaganda that in essence obtains “buy in” both morally and fiscally from the general population through the use of tax dollars. Current day, we contend with the overuse of incarceration, known as Mass Incarceration,and the lesser-known municipality approach of policing for profit, in which their systemic practices of excessive ticketing and fining bring in revenue that sustains the viability of not only police departments, but other aspects of the criminal justice system. One example right here in the Denver metro area is the small town of Mountain View. A municipality with a twelve block radius, a population of less than 600, with its own police force.

Several local news outlets have done investigations on Mountain View Police Department in the last two years, discovering that they have been the quintessential small town “speed trap” that most of us are familiar with.

“A 2014 9Wants to Know investigation found that Mountain View’s police department was funded largely from fines for traffic tickets. In one 12-month period, the department’s officers wrote 885 citations for “obstructed view”, violations to motorists who had cracked windshields or items dangling from their rearview mirrors. By comparison, police in Denver – with more than 1,000 times as many residents – issued fewer obstructed view citations the same year.
Mountain View officers also issued 1,700 seat belt tickets in one year – dwarfing the number issued in other departments in much larger communities. In all, half of the town’s revenue came from fines and fees on traffic citations.”
The Colorado Constitution states seat belt violations cannot be a primary reason to pull someone over, but currently Mountain View treats it as a primary violation, under its own ordinance as a Home Rule City, and this issue has also been contested in the past by ACLU of Colorado.

Not long after Mike Brown was killed by Ferguson police in 2014, the Department of Justice was called in to do an investigation into police practices. Beyond showing how  Ferguson police interacted with or profiled their community members, the report revealed startling high numbers of people in the Ferguson area caught up in the criminal justice system for petty violations: from jaywalking to lawn (yard) violations. Revenue from fines were at 40% of the agency’s total budget thereby reducing a substantial line item for the municipality. We recommend you read the full report here to get an idea of just how out-of-control their policing for profit practices were, and how interwoven the rest of the criminal justice system was in maintaining such practices.

Policing for profit is a practice gaining more and more traction and stories similar to Ferguson  exist all over the country. Like private prisons, one can argue the root foundation is derived from profiteering from the continued subjugation of poor communities and people of color. Such practices, and one can even add asset forfeiture to the list, are supported by the inflammatory language, images and propaganda put forth during the war on drugs. A culture of apathy was created that blindly accepted “tough on crime” rhetoric  as necessary to provide “public safety”.
The examples the small police force of Mountain View this small provide concerning recent nationwide practices doesn’t stop with policing for profit.  It also reveals the common police practice of ensuring overtime is paid. The New York stop and frisk campaign put forward by Drug Policy Alliance reveals how the actions on the streets often reflect the need to secure overtime pay. Recently, two Mountain View PD officers were indicted for falsifying reports, and attempting to collect nearly $30,000 in overtime from state grants, as reported by the 9news.
The Mountain View PD isn’t unique in their policing for profit approach; like Ferguson and countless other departments, this highlights a systemic tactic that is utilized throughout the country to generate revenue for municipalities, police departments and other elements of the criminal justice system. This continues to perpetuate an ever growing tension between law enforcement and the community. Our communities need to acknowledge the level all departments engage in policing for profits practices, because this issue is systemic.
Amy Kafuuma is a member of the Denver Justice Project a coalition that works for criminal justice reform.
Please follow and like us: