TUCSON-A group of women, with the number of recovered migrant remains found in the desert written on their stomachs and the names of young men killed by Border Patrol Agents written on their backs, held a silent vigil held in front of the Deconcini Federal Building. The names on the crosses are people whose remains have been found in Southern Arizona this year. 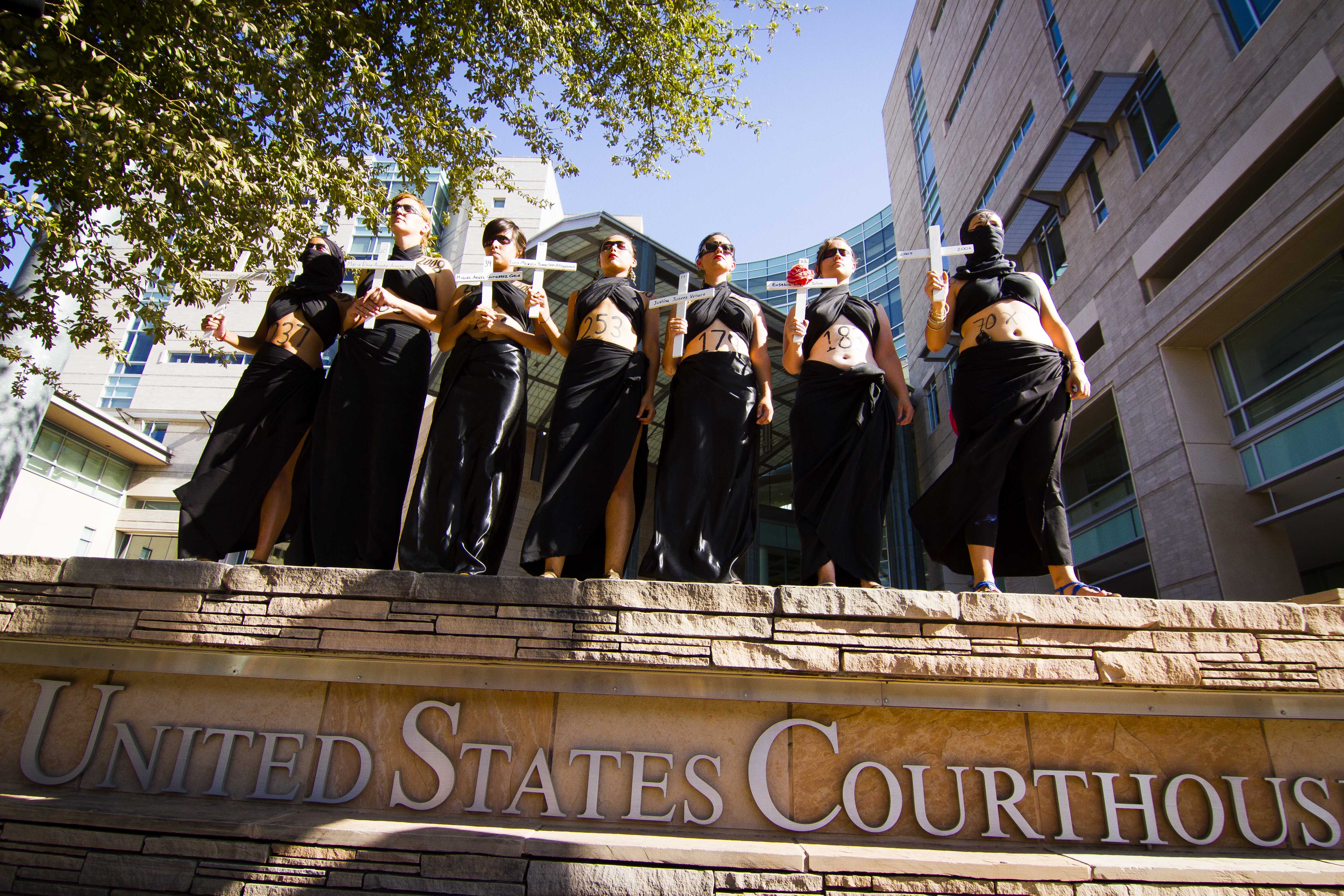 Photos: Murphy Woodhouse/The Nation Report
A group of women, with the numbers of recovered migrant remains found in the desert written on their stomachs and the names of young men killed by Border Patrol agents written on their backs, held a silent vigil in front of the Deconcini Federal Building. The names on the crosses are people whose remains have been found in Southern Arizona this year.

Those are the number of human remains recovered in southern Arizona in fiscal years 2007-2011 respectively, according to local migrant advocacy group Derechos Humanos. Most of them were migrants trying to find work or reunite with families in the United States.

Several hours before, the United States Senate had passed its version of comprehensive immigration reform (CIR) with a landslide vote margin of 68 to 32. While providing a long and arduous path to citizenship for some undocumented migrants living in the country, the bill also calls for an unprecedented militarization of the southern border with Mexico. Among other things, the version of CIR passed by the Senate will roughly double the number of Border Patrol (BP) agents on the southern border, fund the construction of 100s of additional miles of fencing and require the 24-hour drone surveillance of the entire frontier. The price tag for all of the border security measures is a little more than $40 billion. The rally, which was organized by a number of southern Arizona humanitarian and peace and justice organizations, was meant in part to call attention to these elements of the reform package, which have largely been drowned out by talk of pathways to citizenship.

Echoing a widely held view among the dozens of attendees, No More Deaths spokesperson Sarah Launius said that the consequences of this militarization will be predictable and tragic. 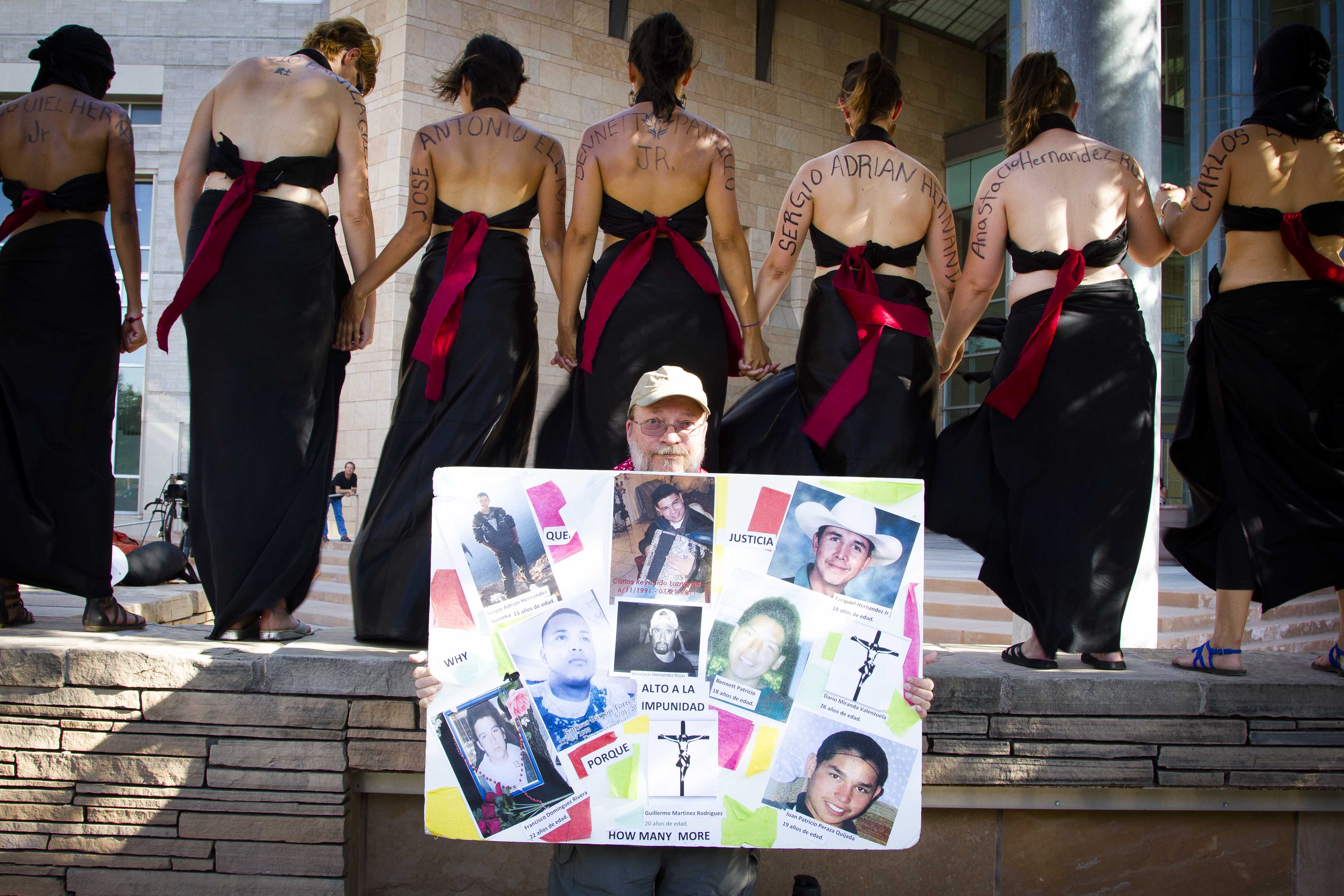 Chuck Kaufman, National Co-Coordinator for the Alliance for Global Justice-one of the organizers of the event-holds a memorial for those who have been killed in Arizona near the US Border by Border Patrol agents.

Alma Hernández, an organizer with Corazón de Tucson, said that for future undocumented migrants, reform will mean little more for them than a more dangerous border.

“[Migrants] are just going to try and go to the hardest place and go around because they still want a better future,” she said. “So they are going to come and try and get a better future, but knowing that they could lose their lives. So, [immigration authorities] are just doing genocide.”

A recent study from the Binational Migration Institute makes a compelling, quantitative case for the link between border enforcement measures and migrant deaths referenced by Launius and Hernández. The authors note that up until 1999, the number of bodies recovered in the Arizona desert annually was low, even single-digit low. However, the study’s authors note that “border enforcement and securitization practices initially instituted in the mid-1990s” pushed migrants out of popular urban crossing areas and into the most hostile areas of the American southwest. This resulted in a massive spike in migrant deaths, getting as high as 225 in 2010 in southern Arizona alone. Since 1995, over 6,000 migrants have perished in the desert border wide. More than 2,000 of them have died in the Arizona desert. 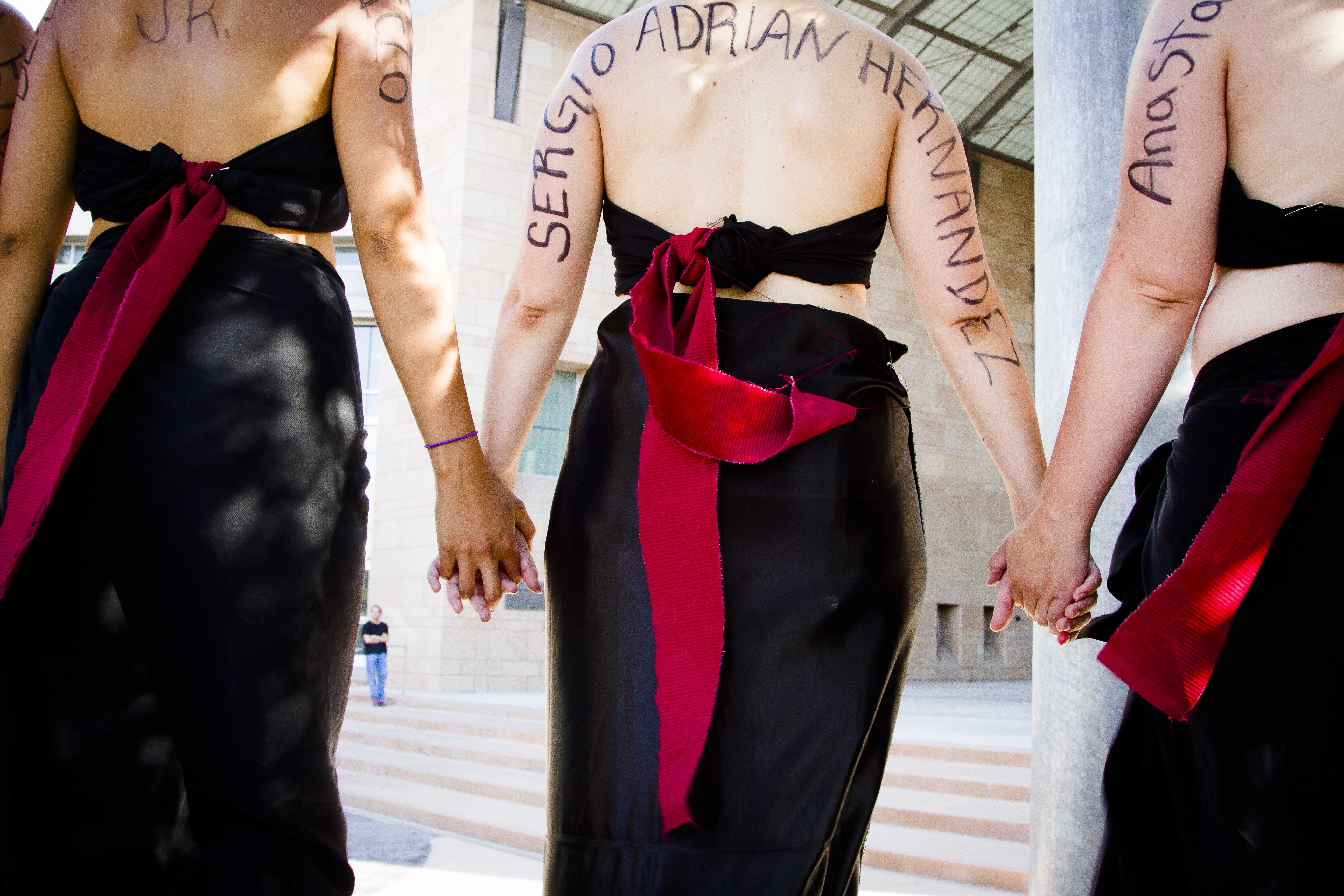 Vigil-holders in front of the Deconcini Federal Building. Sergio Adrian Hernández was a 15-year-old resident of Ciudad Juarez who was shot and killed by a Border Patrol agent in 2010. Border Patrol alleges he was throwing rocks at agents.

The site of the action was chosen in part because on the second floor of the federal courthouse behind the protesters, up to 70 migrants are criminally prosecuted en masse every business day for illegal entry and reentry under a program known as Operation Streamline, which has been criticized for overwhelming southwestern federal district courts with petty immigration cases and violating the due process rights of migrants. The Senate’s bill will triple the number of the migrants processed daily in Tucson, from 70 to 210, and provide $250 million over five years to pay for the necessary court staff and costly prison sentences meted out to the migrants. Additionally, the bill doubles the maximum sentence for illegal entry, the crime to which nearly all Streamlined migrants plead guilty, from 180 days to 360 days. Private prison companies operate many of the facilities where migrants serve their Streamline sentences and they stand to profit handsomely if the bill becomes law. 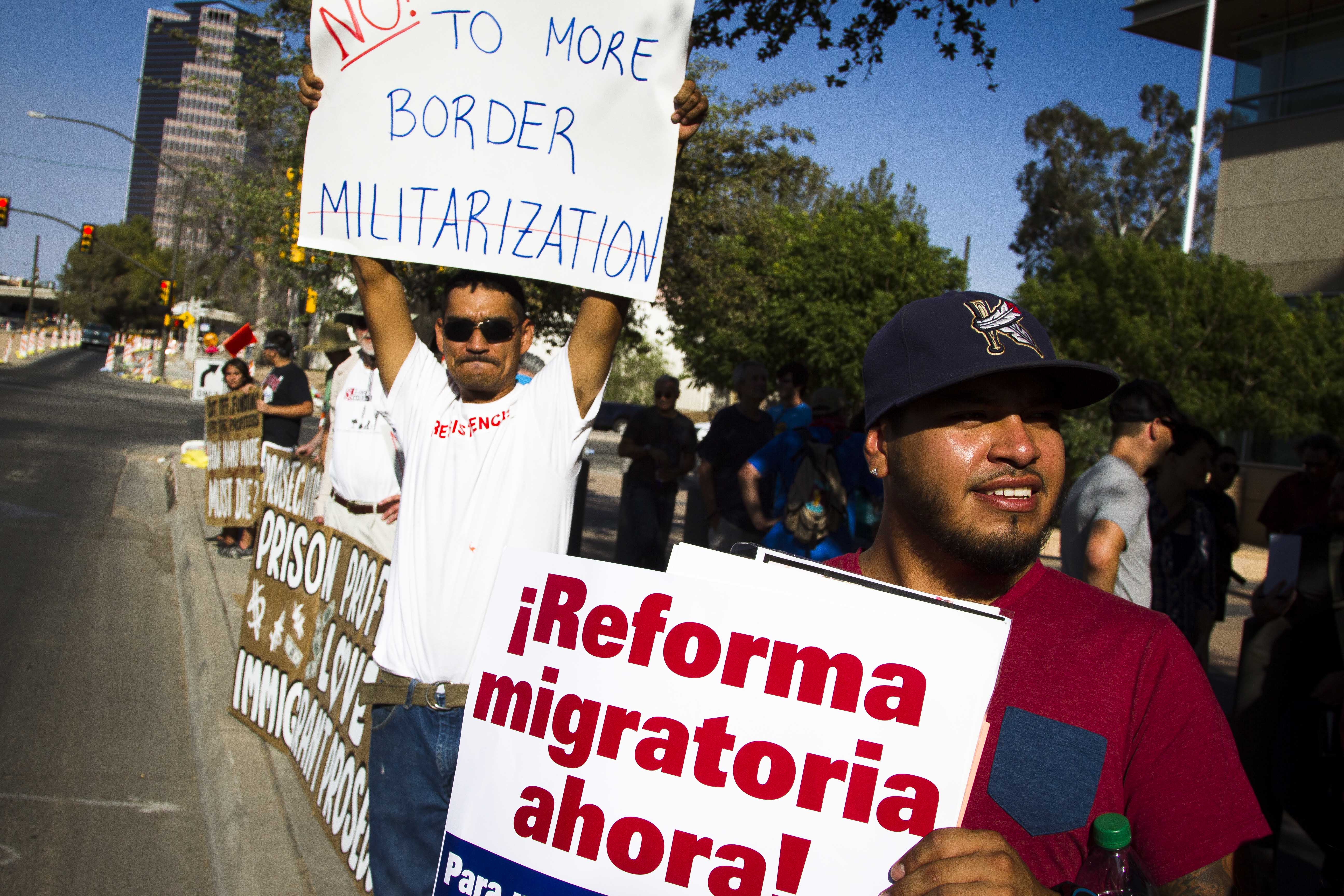 One of the protester’s signs put it succintly: “Prison Profiteers Love Immigrant Prosecution.”

Protester Jeremy Slack, who is also one of the principal investigators of a massive quantitative study of migrant experiences with US authorities, said that the criminalization of migrants affects far more people than just those who go through programs like Operation Streamline.

“By policing undocumented immigrants as if they’re criminals, treating them within the same lens that you would treat suspects of terrorism, causes intense criminal penalties for peoples’ family members, for people’s mothers, fathers and siblings,” he said. “Once you do that you tear people apart and you make certain populations ineligible to ever participate in the US political system and be allowed to legally be in this country. And children have a basic human right to an intact family. Treating some of their members of their family as criminals, sending them to prisons, sending them out into the desert, these processes cause more harm than good.”

But opposition here is not just about an increase in migrant deaths and criminalization. It’s also about what a massive increase in government surveillance and BP agent presence within 100 air miles of the border will mean for civil liberties. Among other things, immigration agents have recently been implicated in a growing number of corruption cases, shot and killed at least 20 people since 2010 with very little transparency and almost complete impunity, engaged in systematic abuse of apprehended migrants, and operated with few constitutional checks on their search and seizure powers. 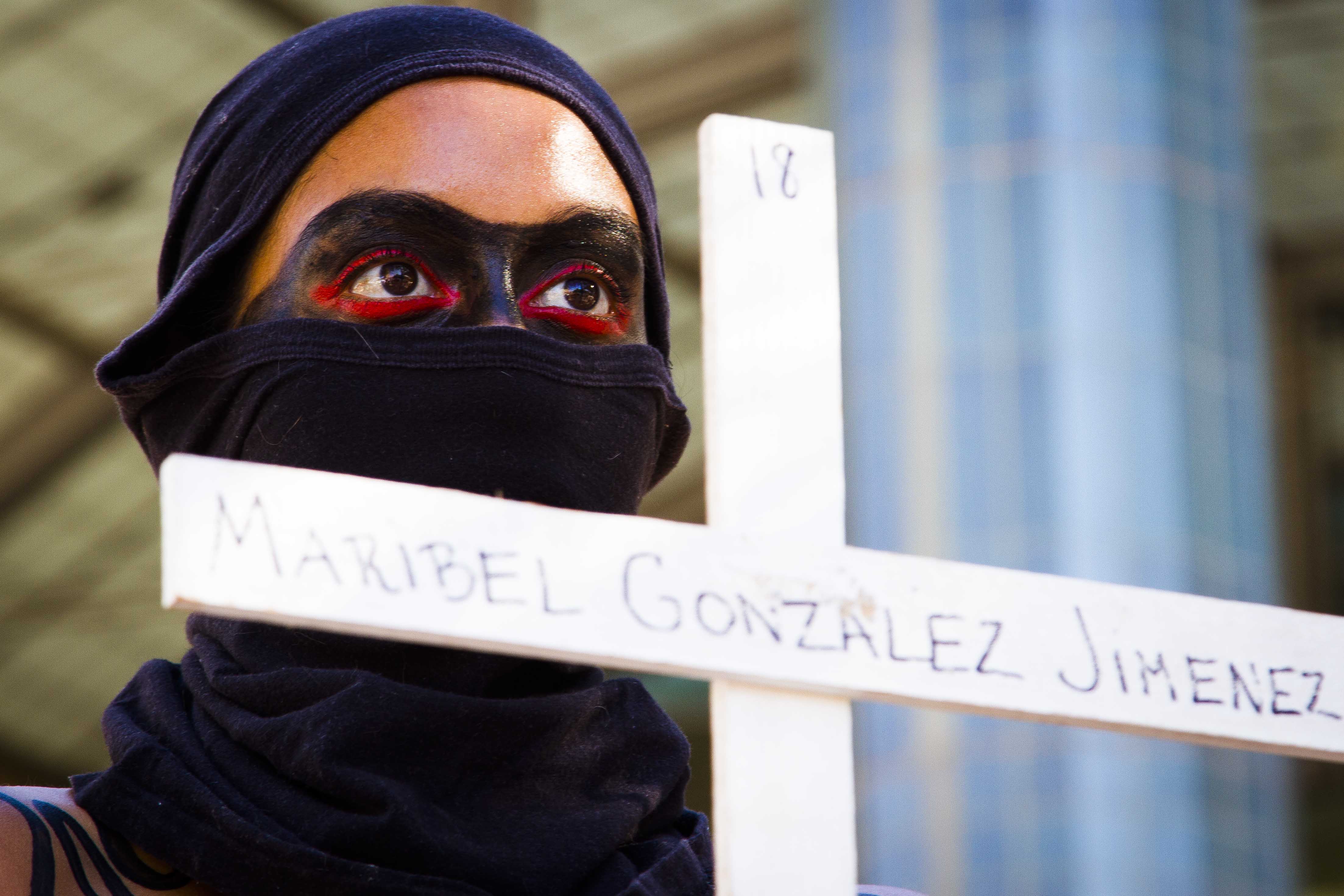 Juanita Molina, executive director of the Border Action Network, said that many people don’t understand that the bill will have negative consequences for far more than just undocumented folks and communities of color on the border, something she knows from personal experience.

“They don’t take into consideration that they are giving away their own rights,” she said. “I am a US citizen. I was born in this country and I have all the documents to be here and yet I am stopped just as often as anyone else because of issues of racial profiling.”

Molina also criticized the bill’s legalization provisions, which will likely exclude many of the roughly 11 million undocumented people living in this country. That these provisions are not as generous as many believe them to be makes the militarization elements of the bill all the more unpalatable for border communities, which will disproportionately bear the burden of increased surveillance and Border Patrol presence. For instance, the bill requires those who get Registered Provisional Immigration (RPI) status to maintain an average income above 100% of the federal poverty line and never be unemployed for more than 60 consecutive days, stipulations that will be difficult for members of migrant communities hit hard by the US recession.

“[T]here are counties, like Santa Cruz county (a border county due south of Tucson), where over 60% of the population lives under the poverty line. And so, to have those kinds of prerequisites in areas where most of the population is living under the poverty line is a ridiculous one and systematically rules out many people who may not have the economic resources or even people who have had certain complexities in their lives.”

Molina, like the other protesters, believes that a fair pathway to citizenship is critically needed by undocumented folks and their families. But in her eyes the bill, beyond radically militarizing the border, will disappoint many of the millions who want to regularize their status and further criminalize future migrants.

“What we need to do is take away the criminalization of our community and start again,” she said.

With the reform effort now moving on to an uncertain future in the House of Representatives, Launius summed up the feelings of many protesters and others living on the frontlines of reform and the militarization it will bring.

“This is taking us down the wrong path,” she said. “This is not the reform that anyone has been wanting.”