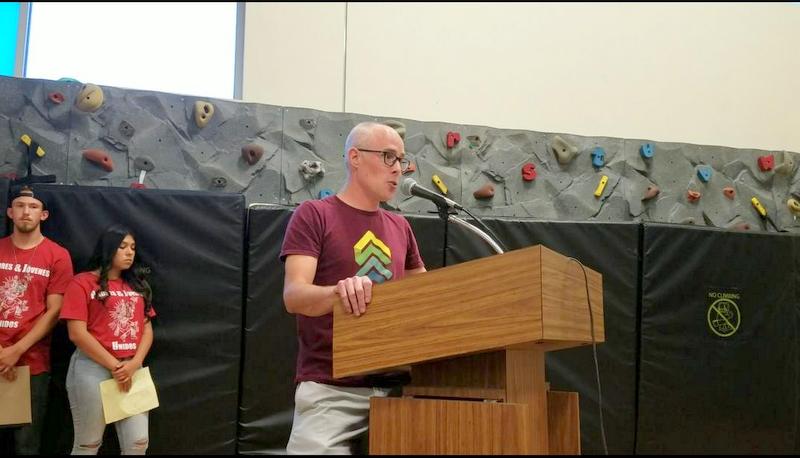 Looking to the School Board of Denver Public Schools (DPS) for answers, Rise Up Community Schools staff and students posed questions at Thursday’s board meeting about what the board will do in the future to keep the school safe from police.

Principal Lucas Ketzer gave a detailed timeline of what happened on April 24 when officers from the Denver Police Department (DPD) showed up at Rise Up looking for a suspect who police say was alleged to be involved in a shooting.

According to Ketzer, three DPD officers arrived at 12:35 pm accompanied by a student whom police requested a staff member to verify that the student was enrolled at the school.  Being in the presence of this student gave police access to the inside of the school as could be seen by office personnel through security cameras..

The principal was notified of police presence who then approached DPD to inform officers of school policy:  that the student had a choice whether to speak to officers.

Ketzer then described a scenario of looking for and not finding the student anywhere in the building, and then informing officers of his finding, “[The officer] then asked me, ‘Is he not in the building or does he not want to talk with us?’  I said, ‘He’s not in the building.’  He then replied to me, ‘I don’t think I believe you.'”

Ketzer’s testimony then paints a picture of a physical and emotional assault on the school community, “The other officer asked me if I had any children and asked if I’d like to have someone who shot at my children out on street.”

Convinced that the officers would leave the building after information that the student was not on the premises, Ketzer said he returned to another part of the building unaware of events that followed.

A parent who referred to herself only as Marcela described the following moments as terrorizing, “Being there I felt as if I were being held hostage.  I was also frightened.  A teacher who came inside of the office where I was, she was also frightened.  She looked so scared.  And she told me police officers had drawn their guns on her.”

Meanwhile in other parts of the building, others allegedly underwent assaults.  Ketzer described what he learned, “At one point there were approximately ten officers walking through classrooms.  One of our teachers saw them approaching her classroom and stood at the door.  She said to them, ‘How can I help you?’  The officers responded that they needed to search the classroom.  She asked if they had a warrant and the officers replied that they didn’t, but one was being written.  The teacher informed the officers that they could come back to search when they had a warrant.  The officers pushed her out of the way and searched the classroom anyways.  The officer then told her that he could arrest her for obstruction.”

In another classroom, officers allegedly ordered a student to remove his hat and then physically forced him out of his desk.

Both Ketzer and RCS student Tobias Torres said they became aware that the building was surrounded by multiple police cars.  Torres said that police zeroed in on him, “They were looking for a person with tattoos, and seeing how I have tattoos, all eyes were on me, and that made me feel to the point that I didn’t want to [do school] work at all.  How the police dealt with the situation is wrong, and it needs to be dealt with.”

In a statement released by DPD, police claimed that officers had verification that the suspect was indeed inside the building and therefore were not in need of a warrant, contradicting the words of officers on scene who said that a warrant was in the process of being issued.  The department also denied pulling out their guns, “Officers that were inside did not draw their weapons at any point during the search for the suspect.”

Student Mary Jimenez also talked about how some students have not returned to school following the incident, “Students shouldn’t have to stop attending school.  Students should have the right to come to school and feel safe.  School should be a place where students feel secure.”

CRS student Marquis Tom told the School Board that he was on lunch break outside when  police approached him, “I wasn’t feeling scared, but I was feeling angry because they were comparing me to a suspect based on race and the way I dress.  No student should be treated like this.  I go to school to learn.  The cops made it hard for me to focus and stay on track.  What I want to see from the DPS is why police was harassing students on school grounds.”

Jimenez called directly to DPS for answers about what happened, and how the school district would handle working with DPD, “But because we are students of color, and students of low income, we get harassed and pushed around, and we’re expected not to fight back.  We need our respect, and we need answers.”

“We accept that call, and we accept that request, Superintendent Tom Boasberg responded to the community, “What happened should not have happened.  We’re reviewing that incident now internally and also with the police department.  The concerns that were raised here tonight, we share those concerns and we look forward to working with you going forward to ensure that something like this does not ever happen again.” 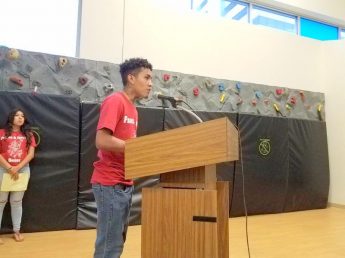 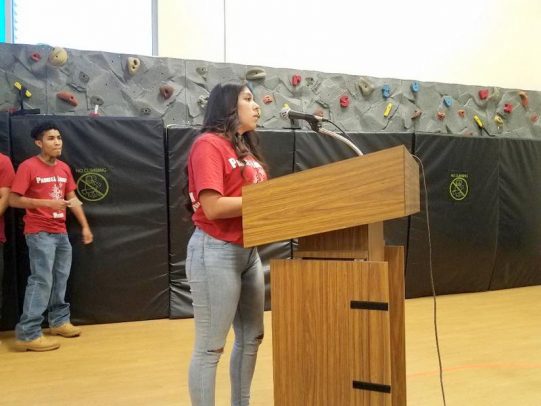