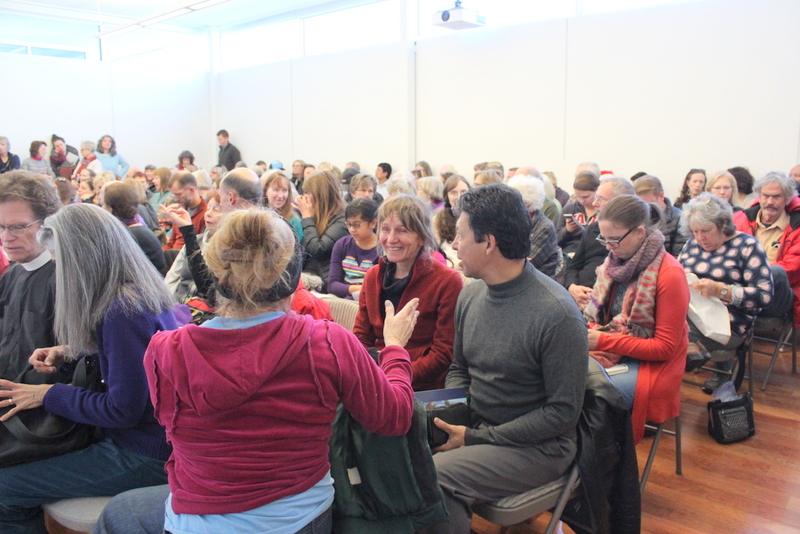 In a standing room only, overflow space community meeting held in Boulder on Sunday, US Representative Jared Polis who represents US Congressional District 2 wanted to offer assurance to the immigrant, Muslim, and LGBTQ community of the state and local protections in place, or to be put in place in the near future.  And he invited local officials to outline those protections. 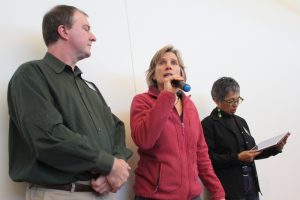 Mayor Suzanne Jones (c) announces that the city of Boulder will discuss emergency measures to protect all Boulderites from positions that President-Elect Donald Trump took during his campaign along with members of his proposed cabinet.

At a December 6 Boulder city council meeting, members voted to approve sanctuary status.  Citing the origins of the sanctuary movement begun in the 1980s to protect those fleeing war in El Salvador, council raised issues of risk to the safety of those living in the city who may need similar protections given a Trump administration.  Mayor Suzanne Jones affirmed to Sunday’s crowd that Boulder will remain a welcoming and inclusive city and that civil rights of all will be protected.  Suggesting an urgency for additional measures to protect Boulderites from threats voiced by Donald Trump during his campaign, Jones announced a Jan 3 meeting where council will consider an emergency ordinance to “codify” existing practices,

“On Jan 3 we will be considering an emergency ordinance that will codify our existing practices, but we think it’s really important to put them into law about how we value and about how we’re going to treat immigrants in our community.  As proposed that ordinance would say, ‘No city employee is going to inquire about immigrant status, take action on immigrant status, cooperate with a federal agency regarding immigration status, or spend any money detaining based on immigration status.’  That’s really important to say out loud. Were all troubled about national election results and what that may mean for out future.  We’ll figure this out and move forward together as a community.” 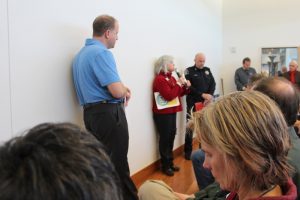 Boulder County Commissioner (c) told the audience that the commissioners will consider a sanctuary proposal similar to the sanctuary city proposal adopted by the city of Boulder on December 6.

At the county level, Commissioner Deb Gardner said that the commission is considering a similar proposal to the city’s, “Our commitment to comprehensive immigration reform and a pathway to citizenship has never been stronger and we will be lobbying both at the state and federal level to protect the policies that we have.”  She added an additional concern for the county’s DACA kids and hopes to include additional protections for these young Boulderites. Deferred Action for Childhood Arrivals (DACA) under executive order of President Obama provides temporary protection for children who are in the country without documentation from deportation, and allows this group to work in the US with documentation.

Representative Polis affirmed to those who wanted to voice dissent in a public forum, especially on the streets, of local understanding of the First Amendment by law enforcement officials.  Undersheriff Tom Sloan offered assurances to the audience that the Boulder County Sheriffs Office would continue with its policy of not detaining people based on immigration status based on the office’s status as an agency of the state and not of the federal government, “We’re not federal agents.  We cannot enforce federal laws.”

In a follow-up interview with The Nation Report, Sloan defended the training that Boulder and Boulder County law enforcement receives to enforce First Amendment protections, “We receive constant updates from court rulings, the First, Fourth, Fifth, Fourteenth Amendment rights throughout your career.  Those are ever-changing.  Every court case may look at it differently.   We get the briefs on all of those and the First Amendment and the Fourth Amendment are the ones we really pay attention to.  We defend everyone’s constitutional rights.” 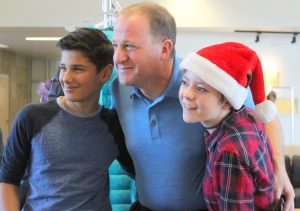 Although the audience appeared to represent an older segment of the population, one middle school student, Noah, said that he keeps current with politics and current events. He responded to what was expressed at the meeting especially about how to get a sense of the current culture of the community,

“I think that Boulder’s a very cultural city and the meeting is very good to interpret the culture within the Boulder community, and especially with the election, all the bonding is great for the community as well.  It’s helping to be stronger together.  If we want to fight with these bills and issues that have been proposed, it helps to be together, all cultures and ages, and sexual orientations.”

Editor’s note:  The Nation Report holds a policy of interviewing minors only with parental permission and will publish only first names of those whose parent(s) has given permission.