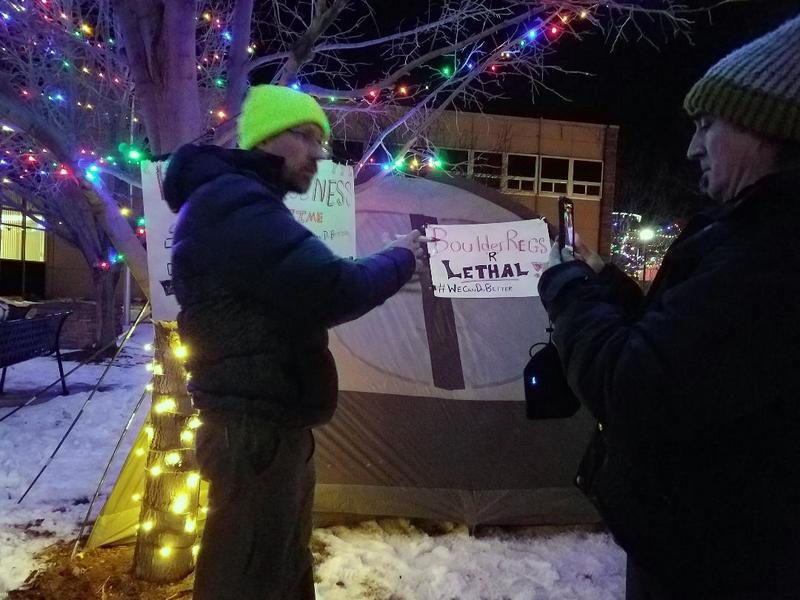 The Agenda packet for this Tuesday’s March 5th Council Meeting contains a section labeled “AGENDA TITLE: Methamphetamine Use in Boulder, Discussion and Direction.” It begins on pg. 205 and goes to pg. 219, available here.
WHAT IS CITY STAFF ASKING FOR?
The request to the City, based on a very, very concerning broad brush, misleading assertion that methamphetamine use is rampant among our unhoused neighbors is to spend almost a million dollars on increased enforcement (including private security), sweeps of areas where homeless folks may be surviving outside (with no proposed means of addressing Fourth and Fourteenth Amendment violations), and to alter landscaping (about half of the proposed million dollar investment).
To be clear, it was just about a month ago you all voted not to open emergency walk up shelter any additional nights, based in part on the argument that to solve homelessness, the focus is now on housing. The costs estimated a month ago were in the thousands of dollars. Yet here, with zero focus on solving anyone’s survival needs, City Staff is raising the specter of habitual, dangerous drug use to suddenly drop a million dollars, with not a mention of new housing or getting any of the identified users into housing with this expense.
HOW BAD IS METHAMPHETAMINE USE AND IS THE RESPONSE WARRANTED?
The methamphetamine users that are used to make the argument that there is prevalent meth use in Boulder are very likely known to law enforcement, by the very statement in the agenda packet: “Based on their experiences, the city’s HOT Team (Homeless Outreach Team) suggested a rate of meth use up to 80 percent among a subset of the homeless population that are high utilizers of justice system services and seeking housing.”
Notice the qualifiers in the above statement:
1) a subset of the homeless population that
2) are high utilizers of the justice system and
3) are seeking housing.
With all these qualifiers, the fraction of the homeless population using meth is a much much smaller number than 80% of those in the community. Way way less.
From the very numbers shared in the report, one can estimate that this million dollar request is based on roughly 70 to 80 people using methamphetamine. Of those, we have no freaking clue how many are using methamphetamine intravenously such that they would be leaving used syringes. But meth at its cheapest is sold in powder form and snorted, or smoked in a pipe. So  of the 80% making up maybe 70 to 80 people, only a small fraction are likely needle users. What is the real number? Five? Ten? It very well could be our HOT team has identified five to ten such users.
And yet Staff has proposed an entire million dollar investment and a policy that will, as proposed, certainly violate unhoused neighbors’ constitutional rights based on this five to ten people (or whatever small, identified number of people) who are doing methamphetamine intravenously.
This response is a manufactured emergency that would make Trump proud, but that community members of Boulder will see right through. And so should City Council.
CONSTITUTIONAL ISSUES
Homeless folks in Denver just settled a federal class action lawsuit that Boulder Council should be very wary of in deciding to approve sweeps of our unhoused neighbors’ property.
Among other concessions, the City of Denver “agreed to give seven days written notice before cleaning up campsites and to make seized property available for retrieval for 60 days “at no cost without fear of arrest.”
Denver failed to have the lawsuit dismissed or to win on summary judgment, and in many cases, the sweeps there offered more notice and opportunity to retrieve property than Boulder is proposing, which is exactly none.
Any use of private security, any use of the police, and any taking of property needs to comply with Fourth and Fourteenth Amendment protections, as Denver’s lawsuit should teach us. What City Staff is proposing will set Boulder up for a lawsuit, just as our neighbors in Denver experienced, but with even less of a legal defense of a notice and retrieval process in place than Denver had.
WHAT SHOULD WE DO INSTEAD?
What happened to housing focused shelter programs? What happened to investing in housing or bust?
What happened is the City is apparently all too eager to spend significant amounts of money to push homeless folks around with private security and police while unconstitutionally taking their belongings. Stop it.
Assuming our Homeless Outreach Team has identified some small number of meth users who are likely most of the cause of the concerns used to argue for spending a million dollars, let’s actually address the root of the problem. Even if some number of people are unidentified and using methamphetamine intravenously, getting to the root of the problem will not be achieved via increased enforcement.
The report spells out what’s need: addiction treatment and behavioral modification (I would call it therapy). I would add inpatient addiction treatment with a path to housing under a housing first model. Expansion of programs such as the pretrial diversion program that D.A. Michael Dougherty, Sheriff Joe Pelle, and others put together is a shining example of actual solutions. Adding inpatient care would be a wonderful use of a million dollars that gets to the root of addicted unhoused neighbors’ issues.
COUNCIL SHOULD SEND STAFF BACK TO THE DRAWING BOARD
The proposal to Council that we spend nearly a million dollars on landscaping and enforcement that could certainly make it to federal court for constitutional violations should not even be before Council. But as it is, it deserves your resounding and unanimous no vote.
Darren O’Connor
President, University of Denver Sturm College of Law National Lawyers Guild Chapter
Please follow and like us: