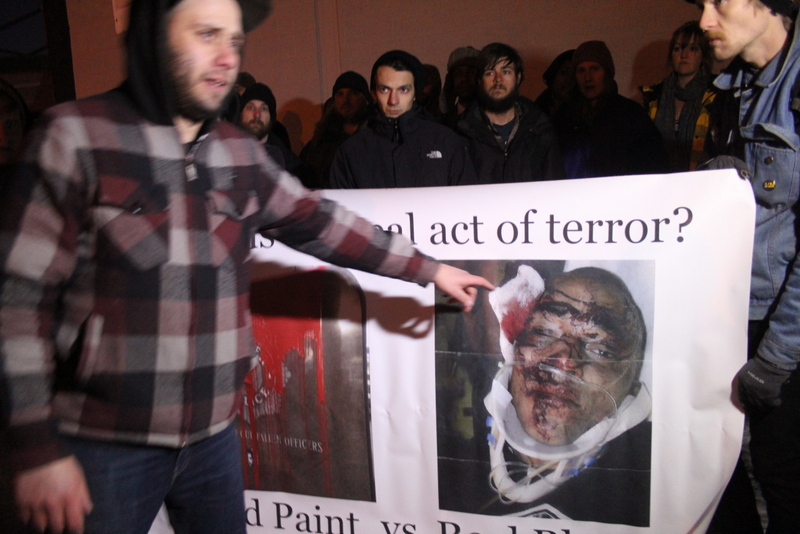 Press conference held in 2015 outside of the Romero Funeral Home where Ryan Ronquillo was fatally shot by Denver police in 2014. The rally called for the public to compare the spilling of paint on a police memorial where two people were charged with felonies, to the police violence against Alex Landau in 2009 where no charges were filed. Protesters also called out inaccurate and bias media reporting by local outlets. Those outlets were not invited to the press conference. In yet a separate incident, Dave Strano (left) was allegedly later assaulted by Denver police at a 2015 rally against police violence in Denver. Strano survived multiple injuries.

Alex Landau who survived a 2009 assault by three Denver police officers says that hearing of the possibility that one of the three, Denver Police Officer Ricky Nixon, could get his job back made him sick.  The last time Nixon was fired was in August of 2015.

Landau added that a rehiring would put the Denver community in danger. 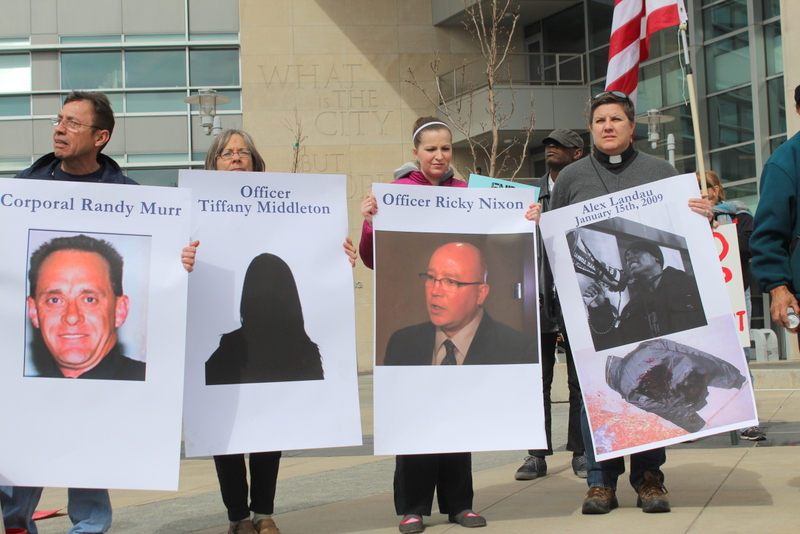 Rally calling for the firing of violent police officers in 2013. Activists hold images of the three officers involved in the assault on Alex Landau along with an image of Landau and the bloodied jacket that he was wearing the night of the January 13, 2009 incident. (photo: The Nation Report)

The September 2 opinion by Denver District Judge Morris Hoffman, after reviewing a separate-use of-force case, suggested that Nixon did not receive a fair judgment by the Denver Civil Service Commission on one of the multiple occasions that he was fired. 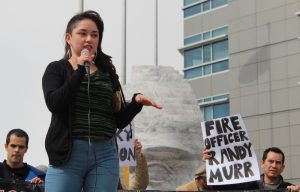 Ana Ortega speaks to a group of supporters about her experience being assaulted in 2009 at The Denver Diner by Officer Nixon. (photo: The Nation Report)

After the Landau incident-also in 2009 but at the Denver Diner-Nixon was fired by the Commission for excessive use of force and for lying about details of the event.  He has since been rehired and refired multiple times.

Landau says that the disciplinary system now in place in the city of Denver makes a mockery of accountability over bad police officers, “We need to focus on how we are going to revise or do away with the discipline matrix with a model that actually provides community safety.”

In 2009 Alex Landau was a 19-year old college student and was driving east on Colfax in Denver when he was accused by Nixon of making an illegal left turn.  Nixon pulled him over.  During the stop, Landau says that Nixon ordered him out of his car and searched it during which time Landau requested a warrant.   Landau says that his car was searched illegally despite his repeated request.  Nothing was found on Landau or his car but he says that Nixon’s temper escalated when he continued to press for answers.  Landau says that Nixon began punching him in the face while officers Tiffany Middleton and Randy Murr who later arrived on the scene, held his arms on each side while yelling “stop resisting!”

He said that within moments another officer said, “If he doesn’t calm down, shoot him,” and he felt the tip of a gun and saw out of the corner of his eye, a finger on the trigger.  And then he lost consciousness but regained it to the sound of officers laughing, “You don’t know how close you were to getting your f–n head blown off.  Where’s that warrant now you f–n nigg–r?”

Landau said that the incident was the catalyst for catapulting him into a movement to fight police brutality.  And he started his fight from his hospital bed when he finally got pictures of his lacerations, swelling, and other injuries. 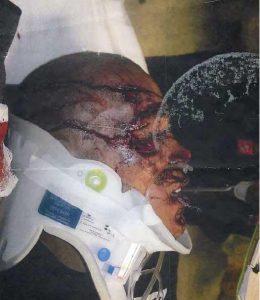 He later won a settlement from the city of Denver in the amount of $795,000.  That year the city paid out $1.2 million in total including a $630,000 settlement to cover Nixon in the other attack and beating of four Denver women at the Denver Diner.

Landau said that the Denver disciplinary system over police officers is flawed and that “the discipline matrix allows for multiple and repeated opportunities to appeal disciplinary decisions.  We [as a community] are the ones who have no immunity to the criminal justice system or the police who roll around with biases, ideologies, stereotypes, and profiles and act on them.”

Nixon’s appeal for his job will go back to the Denver Civil Service Commission headed by Earl Peterson.  Landau said that he has already called Peterson to express his outrage, “He’s killed people.  He’s beaten people nearly to death.  And he will do it again.” 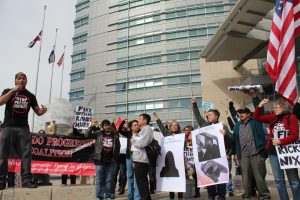 Landau said that one flaw in the system is that the upcoming review of Nixon’s appeal will be held behind closed doors, “We as a community should have a say about who’s policing our communities.”

Landau now works for the Colorado Criminal Justice Reform Coalition and is a member of the Denver Justice Project.  He has worked to inform the Denver community of other incidents of police misconduct, but has also worked to educate the Denver community of the role of the Denver District Attorney who refused to file charges against the officers who assaulted him.  He lead an unprecedented effort to remove current Denver District Attorney Mitch Morrissey which didn’t succeed in recalling him but did send a message to Denver officials that over 20,000 people wanted Morrissey out.   Landau has gone further than the recall effort and has led numerous educational sessions and forums about the candidates who will replace Morrissey after November’s election. 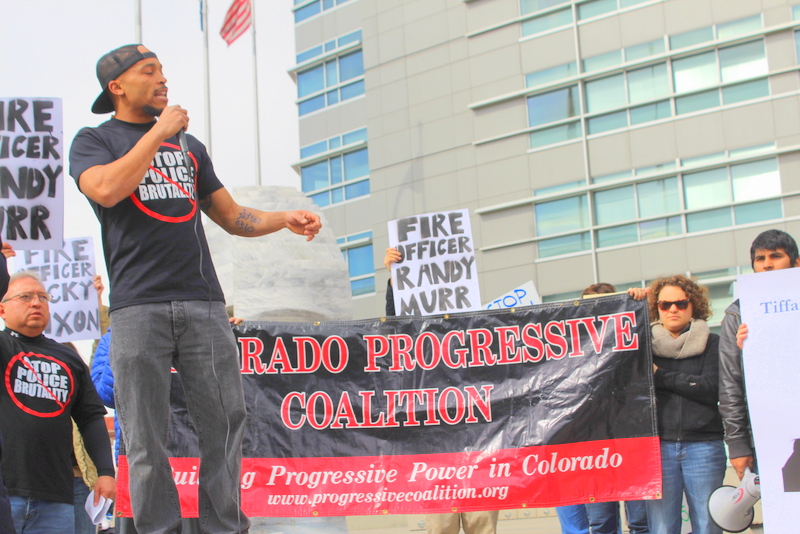 Meanwhile, Landau continues his work and as recently as tonight held a teach-in with others from the Denver Justice Project to educate about the District Attorney position currently contested in Denver.  But his work for police accountability in Denver continues also.  He will continue to fight the rehiring of Nixon after first learning of the latest appeal, “It made me sick.  I was numb.  I was fearful for the rest of my community.  I thought [Nixon] would seek vengeance on me.”