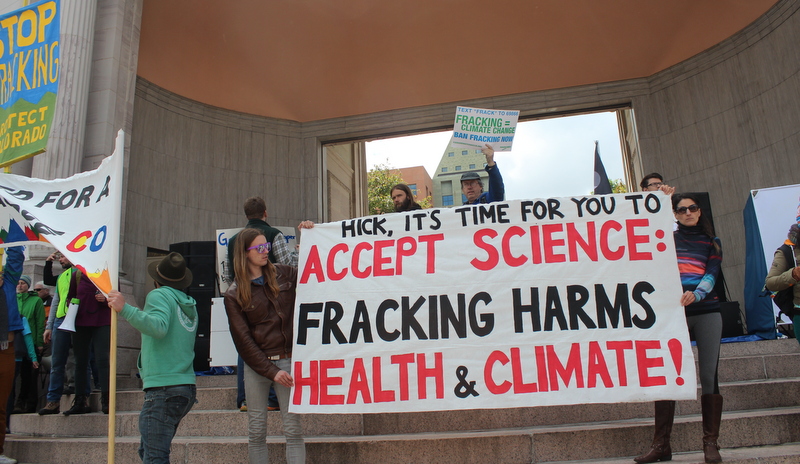 Colorado groups that have criticized Governor John Hickenlooper protested his appearance at Saturday’s March for Science when he spoke at a rally at Civic Center Park.

Hickenlooper, a former geologist and entrepreneur in the beer brewing industry who recently released his memoir:  The Opposite of Woe:  My Life in Beer and Politics was one of a series of scientists who spoke at the Denver rally as part of a global day of action supporting science and scientists.  The Colorado governor was honored by organizers for his work in office, “Since taking office in 2011, the governor and his team have endeavored to make Colorado the most pro-business state with the highest environmental and ethical standards.”

But as Hickenlooper began his speech, About 20 people took the stage holding banners that read, “STOP FRACKING, PROTECT COLORADO,” and “HICK, IT’S TIME FOR YOU TO ACCEPT SCIENCE:  FRACKING HARMS HEALTH AND CLIMATE!”  An effigy of the governor remained in front of the audience, but out of the sight of speakers and the stage. 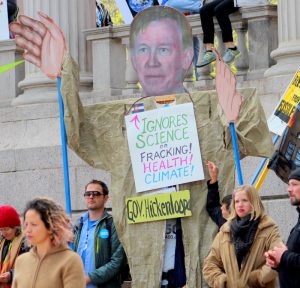 Hickenlooper continued, “Sometimes people who embrace science come to different conclusions  Science doesn’t need to be political.  You look at Denver and Fort Collins are two of the fourteen most polluted cities for ozone.”  He went on to raise the issues of Trump administration cuts to the Environmental Protection Agency (EPA) and the National Institutes for Health (NIH).

But protesters held the stage for the entire four-minute long speech.

350 Colorado Executive Director Micah Parkin said the groups felt it important to confront the governor for his “betrayal” of communities in Colorado by Hickenlooper’s promoting lawsuits against cities whose voters have approved local bans and moratoria against fracking and by his “actively working against efforts to allow communities to create larger safety zones between homes and schools and fracking.”

“We are very disappointed that he has ignored the science around the health, safety, and climate hazards from fracking and has been more interested in protecting the fossil fuel industry profits than protecting his constituents well being.”

It’s not the first time that the governor has been confronted by environmental groups.  In 2013 at Democratic Governors Association meeting hosted by Hickenlooper in Aspen, groups from across the state confronted him at a rally where the governor was mocked for pretending to drink fracking fluid that was discovered to be not the same fluid used by the fracking industry in Colorado.  Activists later entered the meeting and confronted Hickenlooper, but the governor continued to revere Colorado’s environmental regulations. 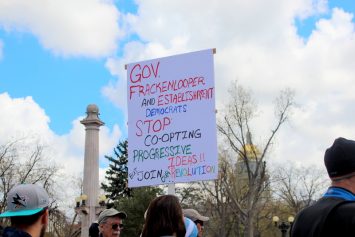