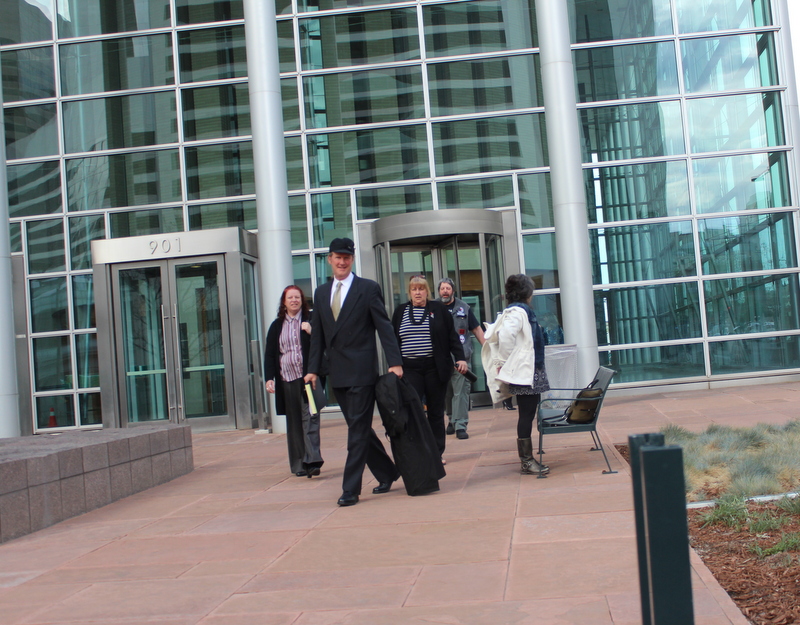 Eric Verlo (c in suit) and Janet Matzen (to his left) leave the Alfred A. Arraz federal courthouse at the conclusion of the first day of the trial challenging the City of Denver and the Lindsey Flanigan Courthouse for First Amendment violations. (all photos: The Nation Report)

A civil rights lawsuit challenging a “free speech zone” outside the Lindsey Flanigan Courthouse in Denver outlined in 2015 by Denver District Chief Judge Michael Martinez was heard by District of Colorado Judge William Martinez on Monday and Tuesday.  The two judges who are not related sat opposite each other where Chief Judge Michael Martinez sat as a defendant in the two-day trial held at the Alfred A. Arraj United States Courthouse.

Plaintiffs Eric Verlo, Janet Matzen, and the Fully Informed Jury Association (FIJA) are challenging Judge Michael Martinez saying that an area he carved out directly outside of the courthouse that the plaintiffs’ attorney David Lane called “the forbidden zone” and defense attorney Stephanie Scoville called “the reserved zone” to pass out free speech material is unconstitutional.

The off-limits area outside of the two entrances into Lindsey Flanigan – outlined in yellow in maps used in court – is where the plaintiffs say they need to stand in order to reach their target audience – namely those entering the courthouse.  Defendants argued that other activists have been disruptive to courthouse business and that those entering the courthouse have been inconvenienced by activists advocating for informed jurors as well as other causes.

The case was filed after two other activists, Eric Brandt and Mark Ianicelli, were arrested in August 2015 and charged with seven counts of jury tampering, all felonies when they also were passing out jury nullification material.  The two faced 21 years in prison.  The charges were dismissed by Denver District Court Judge Kenneth Plotz.  A reply briefing deadline has been extended in those cases after the City of Denver appealed the dismissals.

Judge Michael Martinez later authorized the yellow zone and his staff posted notices in courthouse windows that in effect prohibited persons from exercising free speech including passing out pamphlets, holding signs or banners, or using a bullhorn.

Lane said he took this case because of challenges to the First Amendment as he sees it, “The solutions to problems that the government encounters is not the suspension of the First Amendment, but that is the solution they frequently reach to solve just about every problem.  [The government says], ‘If we only didn’t have Free Speech, we wouldn’t have these pesky nullifiers poisoning jurors and then talking to them about their power to acquit people if they believe the law they’re being prosecuted under is unjust.'” 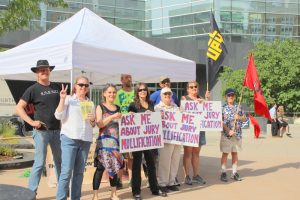 Jury nullification activists set up outside of Lindsey Flanigan Courthouse to educate jurors about their rights. Moments later, the area was raided by the Denver Police Department who confiscated materials including the shade shelter.

As events transpired in 2015, Matzen and Verlo wanted to continue distributing educational pamphlets about jury nullification, but feared arrest.  The two sought an injunction against further arrests which was granted by Judge William Martinez.

Matzen and Verlo and other activists attempted to continue passing out their materials, but their attempts were thwarted by several police raids of the activists’ belongings as shown in the video below where The Nation Report was on location:

Jury nullification is a little known concept according to FIJA.  The group seeks to:

Matzen and Verlo say that the lack of this knowledge contributes to mass incarceration and that jurors don’t understand their rights.

In court, defense arguments centered around disruption of courthouse activities, citing cases of loud noise, and security risks such as banners and signs that block the view of security workers.  Defense brought witnesses that testified about chalk drawings, camping, and other illegal activity occurring outside of the courthouse.  Judge Michael Martinez said on the stand, “We have a right to work unencumbered.”

Plaintiffs’ attorney Lane questioned why the illegal acts were never reported to police especially if court staff felt in fear of physical threat.  Matzen and Verlo themselves were never implicated by defense or by any other complaint of performing illegal acts.

After court, plaintiff Kirsten Tynan, FIJA Executive Director who oversees the national nonprofit organization said, “Oftentimes judges want to squash people from finding out about jury nullification and then they do something which actually is doing our job for us which is prohibiting our activity, make a big deal of it in the press, make it so that there’s an opportunity to challenge it in court.  We’re close to two years of litigation on this [case] so far.  That was because this judge decided to make an issue of it so it brought it to the attention of the press.  That brings it much more quickly to the attention of the public than we can do ourselves.”

Robert Anthony Peters serves as Vice-President of the Board of Directors of FIJA and traveled from Tucson.  He responded to the trial, “It’s disappointing how little judges seem to appreciate the First Amendment, particularly the one who was on trial.  Also his understanding of the law seemed to decrease as he was questioned by opposing counsel.  It seemed there was a fair bit of obfuscation going on on the part of the defense and it was very discouraging as these people have a tremendous amount of power over the public but don’t seem to see themselves as public servants.”

After court Lane assessed the case when The Nation Report asked about the larger implications of jury nullification and First Amendment issues, “So we have already won this case because that order [the injunction] stands no matter what happens in this case.  We have an injunction permitting distributing jury nullification literature at the courthouse.  The state of Colorado hasn’t challenged that underlying order.  They’ve simply said, ‘We need a carve-out area adjacent to the Courthouse where you can’t do that.  And we’re saying, ‘You can do it on the [Courthouse] Plaza and the Denver Police have been enjoined from arresting people for doing it.’

“When we started this case, two people had been arrested and charged with felonies for passing out that literature.  We won that issue.  So no matter what happens here, it’s a minor skirmish.  We’ve already won the war.”

When asked about the concept of jury nullification in this country Lane responded,  “Once a juror is seated, they are instructed by the court, ‘You can’t engage in jury nullification.’  What these folks are trying to tell jurors is they have an inherent power to engage in jury nullification.  A jury system is a bulwark against tyranny.  And if jurors believe the law that’s being used to prosecute someone is unjust, they have the power to simply regardless of what the prosecution has proven.  Judges don’t want jurors to know that, but these folks want jurors to know that.  And that is called Free Speech.”

A decision by Judge William Martinez is not expected for several weeks.

The two juror rights activists who were arrested and acquitted for jury tampering, Eric Brandt and Mark Ianicelli, will begin their trial against the city of Denver for their 2015 arrests in the same courthouse beginning Wednesday morning.