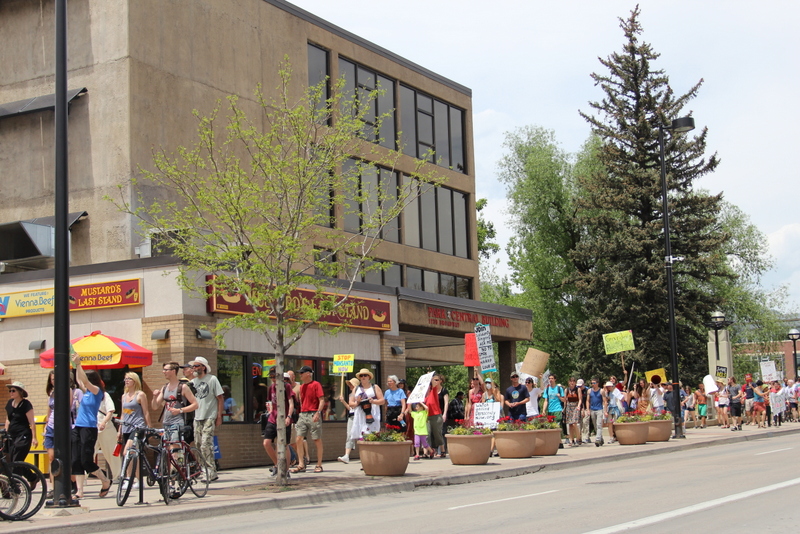 DENVER-Six continents took part in actions against agri-giant Monsanto today. Participants from over fifty countries marched, held signs, and chanted calling for leaders to step up to take action on safeguarding the world’s food supply. There were protests in Amsterdam, Berlin, Cape Town, Cairo, London, Montreal, Sidney, San Juan, Tokyo, and Perth.  And in the U.S. people took to the streets of Boston, Louisville, St Louis, Miami, Hilo, Las Vegas, Los Angeles, New York, Phoenix, Portland, and in Ann Arbor where organizer Kryssi Kay was arrested for not obtaining the proper permit to hold a rally. Locally over a thousand gathered at the west steps of the state capitol in Denver by the time the march would take to the streets. In Boulder it has been years since the streets have seen a protest of that size where hundreds covered the entire sidewalks between Arapahoe Avenue and Canyon while at the same time the distance between Broadway and Thirteenth Streets. 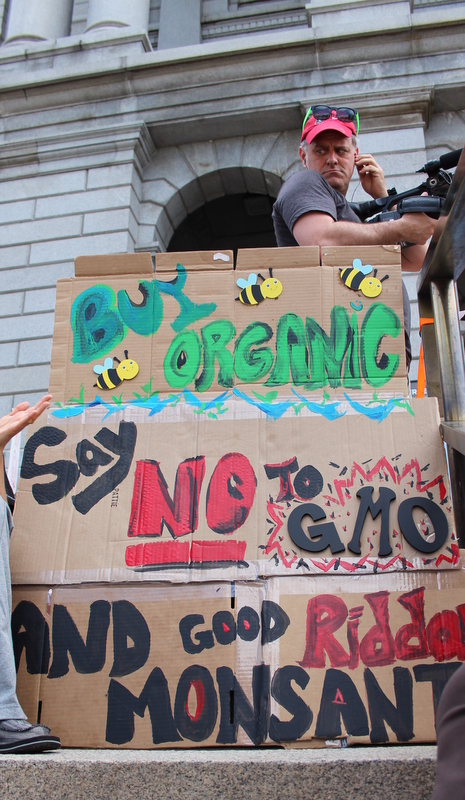 It was at a U.S. Department of Justice/U.S. Department of Agriculture joint hearing in 2010 where farmers from across the nation descended upon Ft. Collins, Colorado for a chance to be heard.  At that meeting, farmers testified to Department of Justice head Eric Holder and Department of Agriculture head Tom Vilsack that they could no longer compete as small farmers with agri-giant Monsanto. They accused Monsanto of monopolizing the seed industry and controlling pricing forcing farmers to buy genetically engineered seeds.  Many had been sued by the corporation for patent infringement. It was at the last scheduled joint Justice/Agriculture meeting of 2010 in Washington D.C. that senior scientist at Pesticide Action Network (PAN) Marcia Ishiaytamen  told The Nation Report the plight of farmers against Monsanto,  “In many fields in the Midwest, Monsanto has set up extremely restrictive contracts with farmers as well as seed retailers so that [according to] part of the terms of the contract, Monsanto can send out investigators to a field any time of the day or night to see if the farmer has ‘pirated’ Monsanto’s seeds when in fact there may be a case of contamination of that farmer’s seeds from GMO seeds blowing in or falling off a truck and infesting the field.”

Seventy-five year old Indiana farmer Vernon Bowman was one such farmer who earlier this month lost his fight against the corporation. The U.S. Supreme court ruled against him on May 13, 2012 ordering him to buy Monsanto’s seeds rather than from the grain elevator where he had always purchased them, “Maybe I made a mistake.  Maybe I would have had better yields if I’d have used first class seed.  I don’t know that.  But I could see nothing of what I had done was wrong,” he told RT News. 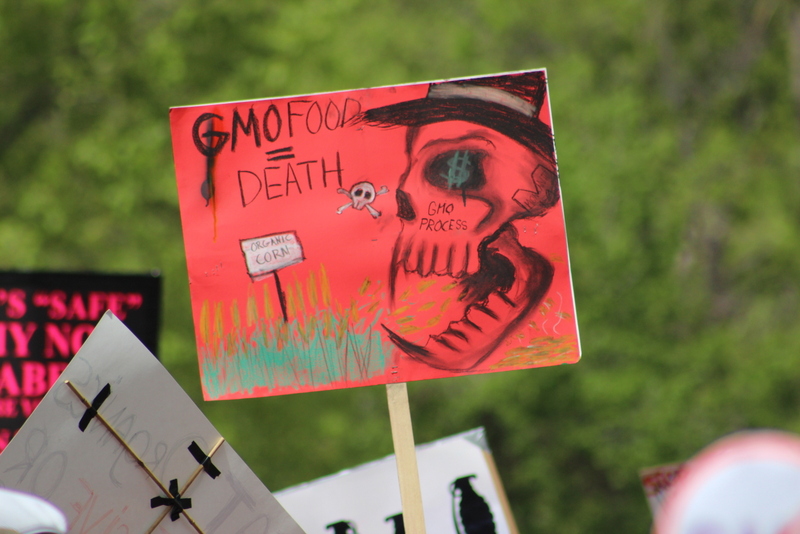 Monsanto owns more than half of the world’s seed market and has engaged in engineering plants and seeds to resist Round-Up ready insecticide. Over 60 countries in the world mandate labeling of foods that are genetically modified. Most countries in Europe completely ban these products however no such restrictions exist in the U.S. and Canada. As a matter of fact, on March 21, 2013, President Obama signed what has been dubbed the Monsanto Protection Act into law as part of the Agricultural Appropriations Bill.   A provision within the law protects genetically modified seed patents and the litigation over health risks, meaning the company is not liable for illnesses associated with their products. Though the law is in place for six months, some groups have acknowledged the political and lobbying power of the company. Further, no legislation exists currently in this country giving consumers the right to know if what they consume contains GMOs.

At Denver’s rally on Saturday, consumer advocate and Executive Director of the Institute for Responsible Technology Jeffrey Smith described some of the health effects associated with products of the Monsanto corporation, “You pour the poisonous Round-Up on the crops.  It drinks the Round-Up and deposits a portion in the soy bean and the corn for you and me.  Well Round-Up is directly endocrine disruptive.  Animals that were fed Round-Up-Ready crops had damage to their testicles, uterus, ovaries.  More than half of the babies died within three weeks.  The babies were smaller.  The babies were fewer.  By the third generation on Round-Up-Ready soybeans, most of the hamsters were sterile.  They died at 4 to 5 times the rate and many had hair growing in their mouths.  We have not had three generations of humans on GM corn and soy, but we have the children who are most at risk, most vulnerable.  And we see a massive increase in complicated diseases often gut-related and immune system-related and behaviorally-related.  The genes already released today will outlast the effects of global warming and nuclear waste.  The genes from corn have already contaminated the indigenous corn varieties in Mexico.  We are bequeathing to our future generations and not just to humans but to all living beings.” 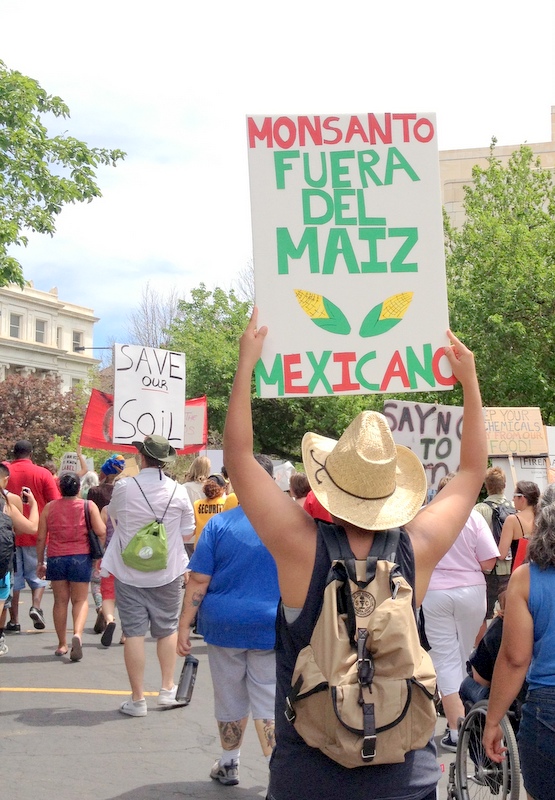 Marilyn Megenity has for 35 years owned the Mercury Café which serves local and organic food, “Monsanto’s a war criminal.  They started out that way.  They’re still a war criminal today in the so called war on drugs in Central and South America which is really a front to defeat the indigenous resistance against the corporate take-over of the land and its resources there.  The U.S. flies Lockheed planes to spray Monsanto chemicals to fumigate the jungle.  And they kill the guava, the cassava, the jaguar, the python.  They kill the parrots, the birds, the indigenous tribes.  They kill the orchids, the almond trees, the monkeys, the corn, and the beans.  We need to hold their shareholders responsible for these crimes.

Marilyn Megenity, owner of the local and organic establishment, The Mercury Cafe in downtown Denver.

Make sure you’re buying organic.  Make sure you support non GMO labels.  Buy from farmers and ranchers that you know.  Avoid these surely GMO foods:  soy, corn and wheat.  Ninety-percent of them in this country are GMO.  If you’re buying something that comes in a little box for sure it’s got soy, corn or wheat in it.  And if it doesn’t say organic, it’s GMO.  Don’t buy it.  Don’t buy sugar beet sugar.  Don’t buy Aspartame.  Don’t buy papayas.  Don’t buy canola oil.  Don’t buy cotton oil.  And this really kills me.  Don’t buy zucchini or yellow crooked necked squash.  Those are the ones that have the most GMOs.  Ok you want some junk food?  Don’t go buy those Kettle Potato Chips or those Boulder Chips.  If they don’t say GMO-free or organic, it means they’re GMO.” 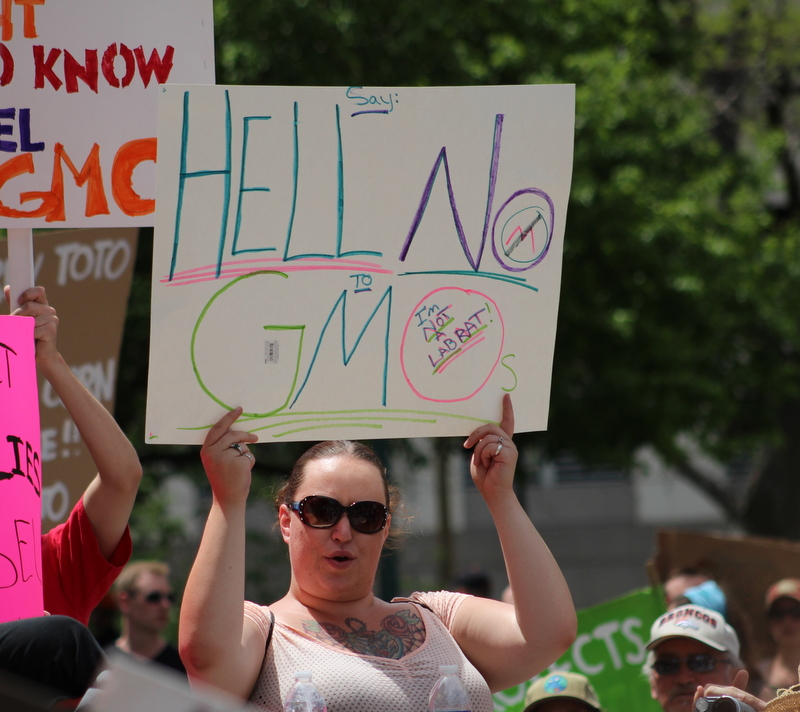 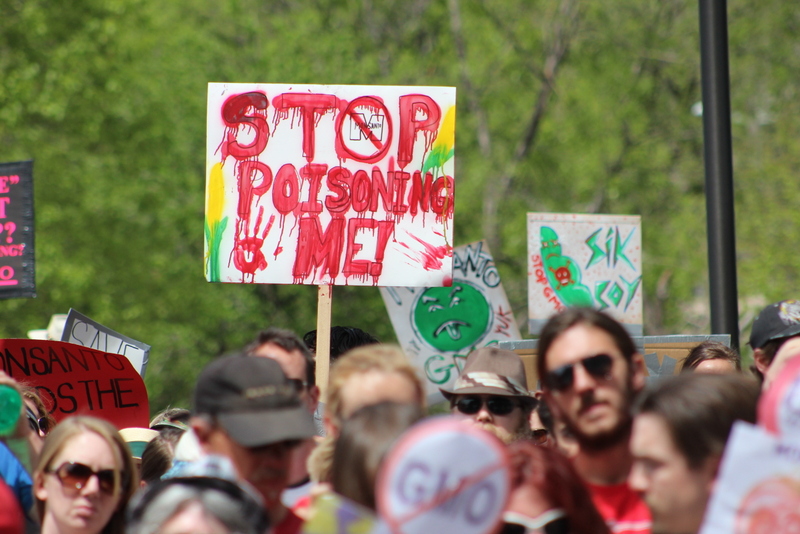 Those looking for solutions could find at least one solution with Ashley who works at Maxfield Organics, “Here we’re handing out free soil so people can grow their own food because that’s really the only way that we can bring Monsanto and all these other terrible corporations down, is just empower ourselves.  I’m out here personally because I love the people, I love the cause, and I love educating people on how to grow their own food because it’s all about solidarity today.”