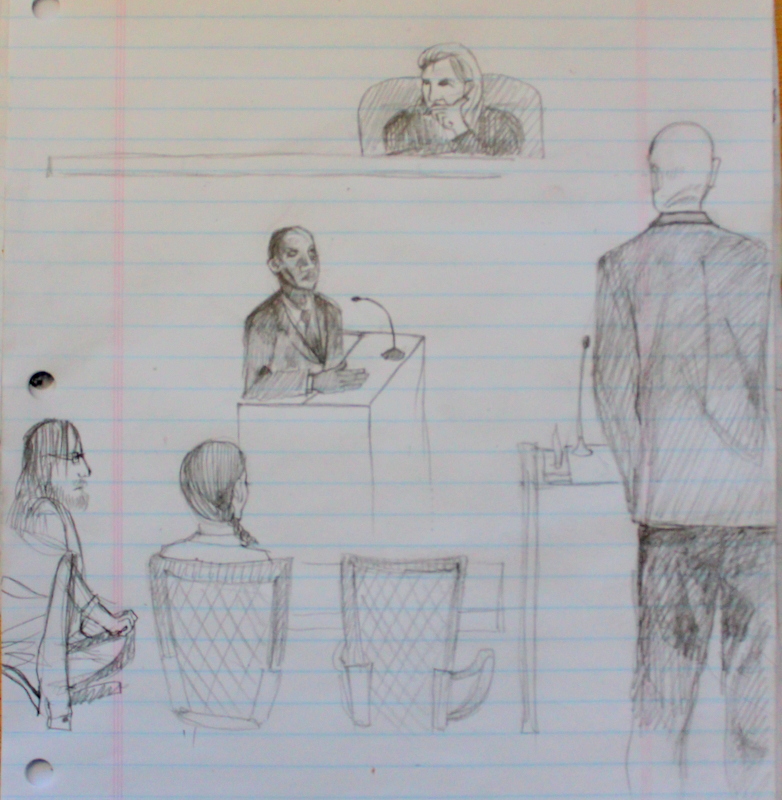 On November 28, 2016 The Nation Report received a news tip that a sweep would be conducted by police that morning of those living on the street at Park Avenue and Lawrence Street, and also at 27th Street and Arapahoe Avenue in Denver.  Our detailed account of those sweeps was published here.  Many of those evicted from those two areas later spent the night on the steps of the City and County Building.  After being moved for the third time that night, three of the evicted allegedly refused to move from the City and County Building steps and were cited.  This trial follows those citations.

“I’m not asking for mercy because when you believe in something, you’ve got to be willing to live and die for it just like when I was a marine I was willing to die for this country; and I’m willing to give my life for this cause.”

Jerry Burton who was one of three defending against Denver’s controversial Urban Camping Ban told a judge before sentencing that although now housed, he will continue to fight for those who are not.

Burton, along with Denver residents Terese Howard and Randy Russell were found guilty by a 6-member jury of unauthorized camping and interference after the three were ticketed on November 28, 2016 for using blankets and shelter while spending the night outside.  According to Denver’s 2012 Unauthorized Camping Ordinance, using a blanket, tarp, sleeping bag, or any type of shelter is illegal.  On May 15, 2012 the ordinance was adopted by a divided council in front of hundreds in attendance – some covering their mouths with dollar bills – who filled an overflow room to observe the vote.  A sit-in outside of council chambers took place following the approval. 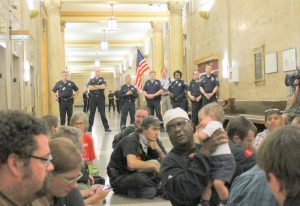 Dozens participate in a sit-in outside of City Council Chambers following a split council vote to approve Denver’s Unauthorized Camping Ban on May 15, 2012. (all photos: The Nation Report)

All three defendants chose to testify at their trial.

Of November 28, Burton and Russell testified that they woke to the sounds of a police bullhorn and yelling.  The two had been living on the streets up to that point.  Howard, an advocate with the group Denver Homeless Out Loud (DHOL) was on the scene as she often is to check on the safety of those on the street.  Burton and Russell testified that they were in poor health and typically take extraordinary measures to get out of bed, especially when temperatures dip.  Burton said during testimony, “We all need to rethink things.  You gotta take precautions [when sleeping outdoors].”  Burton added that his belongings were confiscated including his Marine Corp blanket and he has not been able to get them back.  Howard said that people have “no where else to go.  They don’t have a home to go to.”

The night of November 27,  2016 temperatures dipped below freezing.  When The Nation Report came upon the scene in the early morning, hundreds were seen sleeping on the sidewalk.  Some had no socks or shoes and were covered with makeshift blankets made out of tattered pieces of clothing.  Around a corner, Russell was standing outside of his tent and appeared distraught as he repeated to police, “You broke my tent!  You broke my tent!”  Russell testified that police had broken it when they kicked it in to wake him up.

Later that morning, some who were evicted from the area at 23rd Street and Lawrence Avenue moved to an area a few blocks away at 27th Street and Arapahoe Avenue where Burton had spent the night.  From here, Burton and Russell were evicted and along with Howard and about a dozen others, sought refuge at the Denver City and County Building.  This juxtaposition of an historical group and a contemporary group seeking refuge was described by some who were there since by this date the biblical scene of Mary, Joseph, and baby Jesus had been erected for the holiday season.  But police said that the ordinance applies to camping at all public places and began issuing citations.

At trial the three defendants never denied that they used blankets, sleeping bags, and tents at the time they were approached by police on November 28.  Instead, the three changed the rhetoric of even the city attorney to say that they were not “camping,” but instead were “surviving.”  Russell further stressed this point saying, “I was not camping.  There was no campfire, no S’mores.” 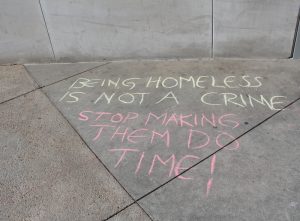 One of several chalk messages outside of Lindsey-Flanigan courthouse on the second day of the trial.

But with these admissions, prosecution met little resistance. Still defendants pointed to the larger implications of a growing homeless population in a city with a growing lack of affordable housing for the poor.  Defendants said they were able to make housing and the treatment of the poor more visible to Denver officials with their actions.

Early in the jury deliberations process, one juror asked about the possibility of paying the fines if defendants were convicted.

Post-conviction, their attorney Jason Flores-Williams told Judge Kerri Lombardi, “In my career as an attorney, I have never been more proud to represent three individuals than I have during this trial.  I believe that these people bring light to our constitution.  They are the heart and soul of our country, and our ideals, and everything that we are.”

All were sentenced to 6 months of court supervised probation and community service.

Russell who is still homeless acknowledged that he would be returning to the streets this evening, “I am surviving the elements of the weather.  I have to exist somewhere in the world.” 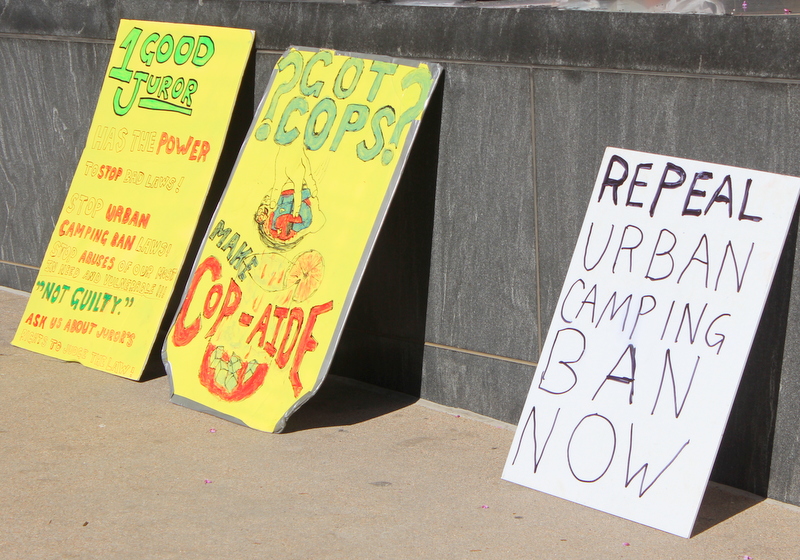