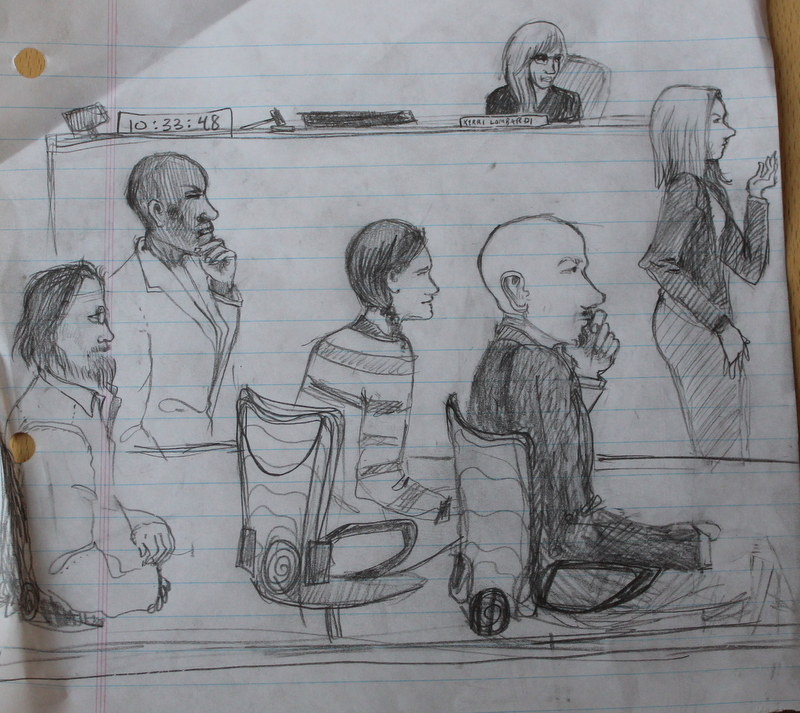 On November 28, 2016 The Nation Report received a news tip that a sweep would be conducted by police that morning of those living on the street at Park Avenue and Lawrence Street, and also at 27th Street and Arapahoe Avenue in Denver.  Our detailed account of those sweeps was published here.  Many of those evicted from those two areas later spent the night on the steps of the City and County Building.  After being moved for the third time that night, three of the evicted allegedly refused to move from the City and County Building steps and were cited.  This trial follows those citations.

“My uncle is homeless.”

“I have strong personal views on rights and liberty.”

“I think you [prosecuting attorneys] are going to get rid of people who don’t agree with the law.”

“Why are we prosecuting people for being homeless?”

“I have an understanding of where homeless people are coming from.”

“I break the federal law every day I go to work (referring to a profession in the legal marijuana industry).  I’ll bear a sense of guilt in prosecuting them.”

“I don’t think they should be prosecuted for doing this.”

Those were comments made by potential jurors during screening on the first day of a first-of-its-kind trial challenging Denver’s Urban Camping Ban.   The majority of potential jurors who answered questions with the above comments were excused from serving.  Six jurors were seated before the noon break.

People rush to gather their belongings on November 28, 2016 before being confiscated by police. (all photos: The Nation Report)

Three Denver residents are on trial facing misdemeanor charges of  “obstruction” and “violating the Urban Camping Ban” as a result of citations they received during sweeps of those living on the streets last Fall.  The three, Jerry Burton, Terese Howard, and Randy Russell chose to fight the charges in court saying that their actions were those of survival and that the Urban Camping Ban is actually a “survival” ban.

In opening statements, the prosecution attempted to describe the sweeps as a compassionate measure simply done to provide services to those who were contacted.  Prosecution told jurors that those living on the street were given ample time to collect belongings, were provided with a social worker to check on their well-being, and were provided with a list of local shelters, “the Denver Police Department had no choice but to ticket.” 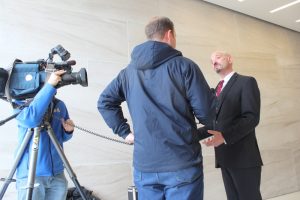 Defense attorney Jason Flores-Williams (left photo) challenged that the law is applied inconsistently and used a Woody Guthrie song to describe the songwriter’s experience being without a place to rest, “Wherever he went, there was a man with a badge telling him he couldn’t be there.”  He defended that the people on the street were not camping, “but just trying to survive.”  Flores-Williams told jurors that there exists no legal definition of “reasonable doubt” which is the burden of the prosecution to surpass with proof and therefore the jurors had leeway in determining their decisions, “We feel that if you bring  your humanity, that you’ll have a hard time convicting.”

Five police officers testified that they were present during at least one of the sweeps.  All said that people had ample time to collect belongings and that verbal and written warnings were given to all before “abandoned” articles were disposed of or placed in bins to be stored by the city.

Corporal Tim Scudder testified that he confiscated the sleeping bag and tent of Jerry Burton to use as evidence.  Burton said that this left him with nothing to keep warm. 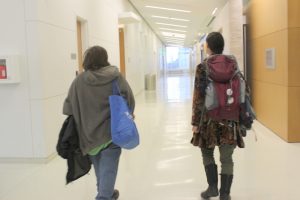 Becky Arellana leaves the courthouse with friend and defendant Terese Howard following the first day of the trial. 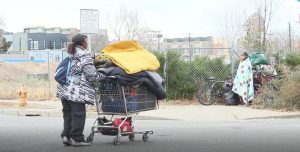 In this November 28, 2016 photo, those who were evicted collected what they could and moved across the street.

Defense witness Becky Arellana who was also present during the sweeps described defendants Jerry Burton and Randy Russell as “sweet” men.  Arellana testified that Burton was “very sick” on November 28, 2016 and that at times can not get out of bed without having eaten, “He often doesn’t have food.”  Arellana testified that on the day of the sweeps [Burton] told police that he needed a minute to wake up, “He didn’t look good.”

Arellana said that while Russell walked away to use the bathroom, police confiscated his belongings while claiming that the possessions were abandoned, “We don’t get enough time to pack up.  They don’t care if we’re sick.”  When prosecution asked if people were camped on public property, Arellana answered, “Yes, and we are public people.”

Arellana described a community living situation in the street much safer than in the local shelters saying that in the streets people take care of each other, while in the shelters, people are confronted with unsafe challenges.  Living on the streets herself, Arellana told The Nation Report that earlier in the day, her tent had collapsed on her and her wife with the weight of the snow.

After jury selection, The Nation Report caught up to two who had earlier been excused from jury duty.

Linda Maltezos said that she felt the city was using the three defendants to make a statement, “They should never take so few people and make an example out of this.  There’s many people out here homeless and if our economy is so great in Denver, we have all this big business, why isn’t something done to help the homeless.  If anything, they’ve started treating them worse.  I don’t like the law either.”

Matt Herzog, an engineer, was excused early in the process after he explained that while he understood the law, he felt conflicted.  He said that the term “reasonable doubt” was vague and that the urban camping law was “ridiculous.”

“I can’t believe we are here.”