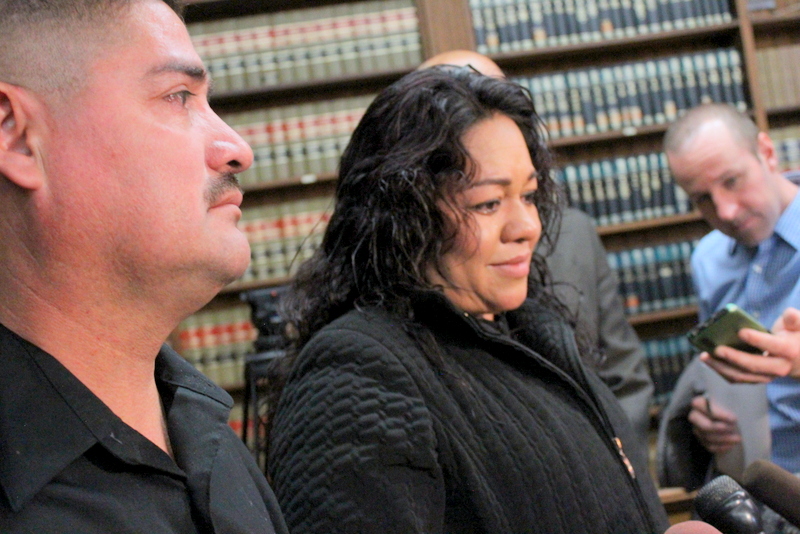 Parents of Jessica Hernandez Jose Hernandez and Laura Rosales talk to reporters after a press conference by Denver’s City Attorney in Denver’s City and County Building.  (all photos:  The Nation Report)

The Nation Report holds a policy of not reporting accusations or allegations against deceased suspects or victims following the 14th Amendment of the Constitution.  In this case, since Jessica Hernandez did not have the opportunity to defend in court allegations of being in a stolen car – because she was killed – The Nation Report will not repeat that particular police allegation.

On Monday Denver City Council will decide if a $1 million settlement will financially compensate the family of Jessica Hernandez, a Denver teen who was fatally shot by Denver Police on January 26, 2015.

The family says not.

“Not even all the money in the world would buy a life, but what we want is peace.  Just like all she wanted is peace.  We don’t want violence, only peace.” Those were the words of Jose Hernandez the father of Jessica Hernandez at a Wednesday press conference called by the Denver City Attorney’s Office and the Denver Police Department in conjunction with legal counsel of the Hernandez family Rathod Mohamedbhai.

Hernandez’ mother Laura Rosales added, “”I hope that something similar to what our family is going through doesn’t happen to another family because it’s a pain so strong that one could hardly imagine.  Even I didn’t imagine it when I first lost my baby. ”

Jessica Hernandez, 17 was fatally shot by Denver Police officers Daniel Greene and Gabriel Jordan after a neighbor had called police to report a parked car in the alley between Newport Avenue and 26th Street in the North Park Hill area of Denver.  Officers said that as they approached the car and ordered Hernandez out of the car, she reversed the car striking one of the officers.  A passenger in the car however, said that Hernandez lost control of the car after being shot. 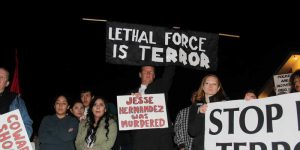 Denver community turns out in response to the shooting of Jessica Hernandez the day the Denver teen was killed Januray 26, 2015.

A community uprising followed the evening of the shooting drawing hundreds to a church near the incident, and the following morning a visibly traumatized crowd demanded a meeting with then District Attorney Mitch Morrissey.  Morrissey did not meet with the group.

Initial community outrage originated from reports that police were seen by witnesses throwing a lifeless Hernandez to the ground after her body was removed from the car.  Hernandez’ parents told supporters that upon identifying their daughter’s body, they saw multiple bruises on her face.  The injuries to their daughter were later explained in a video of the incident sent to the phone of the girl’s father by unidentified sources.

Attorneys Doug Jackson (center in suit) and Lamar Simms (r) refuse to let family members and supporters of Jessica Hernandez into the District Attorney’s office the morning following the shooting on January 27, 2015. 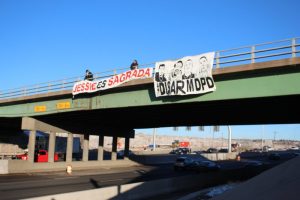 Banners drop over Interstate 25 to mark the one year anniversary of the death of Jessica Hernandez in 2016. 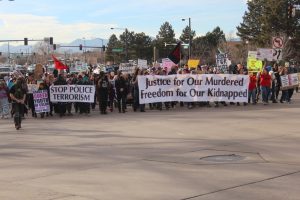 Supporters of those fatally shot by Denver police march down Colfax Avenue in 2015.

Throughout the following months, several rallies, protests, vigils, and other actions took place as well as actions drawing national attention.  The uprising continued the following year.

At a press conference staged by the City Attorney’s Office on Wednesday, City Attorney Kristin Bronson continued to defend the actions of the officers, “In January, after a thorough conduct review process, it was determined that the officers involved in this terrible incident did not violate department policies or practices.  The decision to settle this matter was not based on the conduct of the officers.  The city’s reasoning for settling this case has everything to do with our approach to finding creative solutions that work to rebuild the critical trust between our officers and residents.”  Bronson added that to continue the case would have been hurtful, costly, and divisive.” 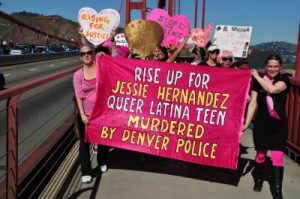 The banner created by Colorado CODEPINK appeared all over the country including here crossing the Golden Gate Bridge in San Francisco in February of 2015 and later that month to the US Social Forum in Philadelphia. (photo: CODEPINK Colorado)

Community response to Bronson’s comments drew further response from organizations that have supported the Hernandez family throughout the process.

Alex Landau, member of the Denver Justice Project (DJP) who also received a large settlement for a 2009 beating by Denver Police responded to today’s announcement, “Today the city priced the life of young Jessica Hernandez at $1 million dollars. Monetary settlements are NOT JUSTICE, and no amount of money can repair the damage, pain and trauma caused by law enforcement violence. [Jessica] your memory and the memory of so many more will Rest with Honor and thrive in our communities.”

That memory was confirmed by Laura Rosales, mother of Jessica Hernandez who described what the family is experiencing and her memory of her daughter to reporters,  “I know that we want peace, but I know we don’t have it.  Because since she’s been away from home, it’s not the same.  She was the sunshine of my home.  I have other children, but she was my little sunshine and she illuminated the other children.  And not just my children, other children, friends, the community.  She was a nice person.”

Questions and doubts arose among community groups about circumstances preceding the agreement which contradicted Bronson’s statement, “This is the best solution for everybody.”  Some groups have asserted criticism of the criminal justice system saying that poor people don’t have the same access to the court system as wealthier people.  Other questions arose about information that families do and don’t receive and how much families are able to trust that information.  After the press conference, Laura Rosales said that she did not even realize that she and her husband were attending a press conference, and mistakenly thought that the family was meeting with city council. 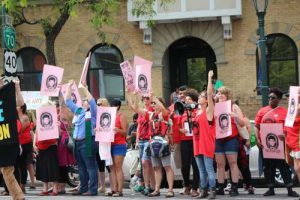 The LGBTQ teen support group Buried Seedz of Resistance (BSEEDZ)/Survivors Organization for Liberation (SOL) blocked Denver’s Pride Parade in 2015 calling for LGBTQ youth to be recognized and for police accountability. Here members hold posters bearing the image of Jessica Hernandez after the action.

One group, Buried Seedz of Resistance (BSEEDZ)/Survivors Organizing for Liberation (SOL) has worked closely with the Hernandez family providing support from the day of the shooting as well as standing with the family at today’s press conference.  The group released the following statement following the settlement announcement:

“We know that historically, especially poor, undocumented, and immigrant families are intimidated into not pursuing their cases because of high costs, and a pattern of officers not being held accountable in this city/country.  In the past two years the family and our community has come together to demand that the police officers involved in the murder of Jessie Hernandez be reprimanded for their actions.  We are therefore left wondering, how can this settlement be representative of justice?”

Mohamedbhai told reporters that the young Hernandez was known for giving her food and clothing to those living on the street.  He added that she had plans to join the US Coast Guard.

But her mother said that she most remembered her daughter’s smile,

“At times she would say, although you may see me sad, I will always be smiling.  And that’s what I saw.  And now her friends tell me, she always smiled even when she cried, she smiled.  And that’s what I want.  For people to remember her with her smile.  and that she be remembered for her humility.”

“She used to say, I like to be humble because I got it from you.  Humility comes first.  And if I have it, I can pass it along to the poor.  And one day, I will have enough to give to all poor people.  And I told her, ‘You can.'”