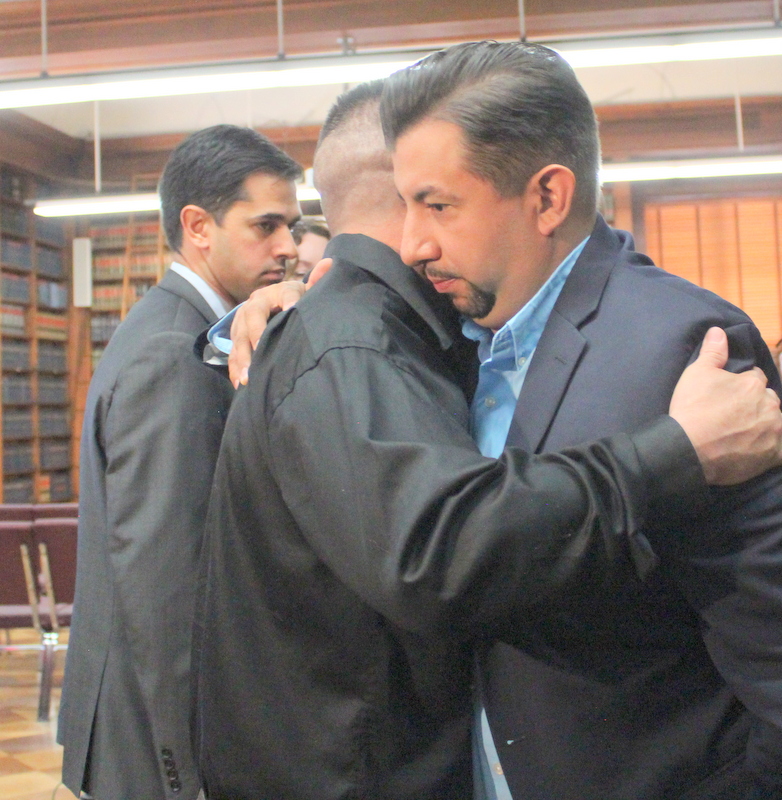 Denver City Council member hugs Jose Hernandez, father of Jessica Hernandez on April 12 after the announcement of the settlement by city officials.

Denver City Council voted unanimously to a settlement agreement announced by the City Attorney’s office on April 12.  Denver will pay $1 million for the fatal shooting of 17-year old Jessica Hernandez by Denver Police on January 26, 2015.

Police approached Hernandez and her friends who were parked in an alley in a northeast Park Hill neighborhood.  There are conflicting accounts about what happened after that, but Hernandez was shot and died immediately.

Activists and survivors of police violence turned out in support of the Hernandez family and applied pressure to the City of Denver and the Denver Police Department to change its use-of-force policies, especially regarding moving cars.

Statements in response to the settlement have been received by The Nation Report.  We are publishing the statements of three justice groups in their entirety.

Denver Justice Project (DJP) a coalition that works to achieve criminal justice reform by “examining and influencing the dynamic of elected officials, especially the DA, and law enforcement” released the following statement the day after the settlement was announced:

DJP continues to emphasize that monetary settlements do not equal justice.  Settlements are a misguided step towards justice, and it is never what the family seeks or foresees as justice. In yesterday’s press conference, the city attorney’s office attempted to frame this settlement as an acceptable and positive form of justice because a trial would have otherwise been too costly and time-consuming. Denver Justice Project disagrees.

While the other actions that the City agreed to in addition to the monetary settlement are unique, Denver Justice Project feels that our community was ultimately denied a real opportunity to pursue an important kind of justice – personal accountability and the possibility of jail for the DPD officers who killed Jessie. We are left to wonder if police accountability in Denver will ever include individual law enforcement personnel facing the kinds of consequences for their actions or even prison time that so many of our families are forced to face for our mistakes. Although DJP believes that we can and should strive for a world where we no longer rely on prisons to deal with problems in our society, we can’t help but continue to be frustrated that, while the current system is in place, there remains a double standard in the way regular people and law enforcement are held accountable.

Co-chair of the Denver Justice Project Alex Landau is firm that, “We need a process that not only ceases the practice of taxpayers funding settlements after police violence, but does not allow police and deputies to hide behind what they felt was ‘objectively reasonable’ when they decide to hurt and or kill someone in a scenario that could have been handled without harming members of our community.” Denver Justice Project continues to call for law enforcement accountability measures that are tangible and effective enough that our communities and families like Jessica’s aren’t left searching for answers.

Sol BSeedz has been supporting and working alongside the family of Jessie Hernandez since the fatal incident in January 2015.  We have come together with the larger community to put pressure on the City to hold the Denver Police Department accountable for their lack of discipline and action towards officers who were responsible for Jessie’s killing.  Since [Jessica’s] murder, our community which includes other families who have been impacted by police violence, have made specific demands in regards to police accountability, none of which has been adequately integrated into meaningful policies, practices, or culture.

In the press conference where the Denver City Attorney announced this proposal, City Attorney Kristin Bronson shared that the decision to settle came from the “high levels of attention and response to the case”, which means to us that overwhelmingly our communities viewed the officer’s actions as entirely unreasonable, unnecessary, and unjustifiable.

We will forever hold numerous questions about the details and efficacy of the proposed settlement. Within the settlement there are four non-monetary commitments and policy development suggestions that leave us eager to know how those will affect police accountability in the future.

For the family of Jessie Hernandez, who have had the beloved sunshine of their family taken from them by the cruel and unforgiving forces of systemic racism and colonization, there can be no justice.  While holding in their hearts that they could never have back what has been stolen from them, the Hernandez’s demanded that the police officers be reprimanded for their actions in hopes that this would set a precedent for the future, that another family would never have to experience all they have been through.

It is 2017 and we know too well by now that families, especially poor, undocumented, refugee, and immigrant families, are intimidated into not pursuing their cases because of high costs, fear and/or threats of further criminalization, and a pattern of police officers not being held accountable in this city and nation. While those police officers walk away untouched, we are left with broken hearts and unanswered questions:  How can a settlement be representative of the justice our communities deserve?

At SOL | BSeedz we continue to recognize this as far from an isolated incident – Jessie’s death echoes the historical pattern and practice of violence that targets our communities and demonizes young people through racial and gender profiling, a particular lived experience for queer and trans youth of color daily. We have also witnessed the immeasurably profound effects of police brutality for individuals, families, and our communities as a whole.

Laura Rosales, mother of Jessie, shared with reporters yesterday at the press conference called by Denver City Attorney, “I know that we want peace, but I know we don’t have it. Because since she’s been away from home, it’s not the same.  She was the sunshine of my home.  I have other children, but she was my little sunshine and she illuminated the other children.  And not just my children, other children, friends, the community. She was a nice person.”

Through the deepest of love, the family carries the immeasurable weight of emotional trauma, fragmented support systems, financial hardship and other impacts that leave survivor’s families like theirs frayed and tapped of most sources of energy.

Families who have survived their loved ones to police violence share a level of exhaustion and pain that is re-triggered through the lengthy process of seeking healing and justice. The Hernandez’s are no different when it comes to the question- can this all be defined as true choice?

We know that settlements ensure prolonged silencing of impacted families through agreements that families will not continue to fight for the justice that they originally sought. Our community will continue the work to ensure that DPD is in compliance with their agreements so that the family’s wish that another family never having to experience this kind of tragedy can be fulfilled. We will forever hold the narrative of who Jessie truly is.  Our beloved LGBTQ community as well as our broader community continues our declaration to ensure that Jessie’s legacy lives on as a young and sacred ancestor to all of us.

May we all visit the site of Jessie’s last breath, often and contribute to uplifting the alleyway between Newport and 26th as a sacred site by leaving offerings, candles, and sacred medicine for our young ancestor.

May we continue towards the lifetime of ongoing and critical healing that will lead to ultimate and divine justice for Jessie’s life and family.

Showing Up for Racial Justice (SURJ) is part of a multi-racial movement that works to “undermine white support for white supremacy and to help build a racially just society.”  The group responded to the settlement:

“We fully support the Hernandez family and hope this [settlement] provides some solace in their grief.  In addition, we do not believe there is any monetary compensation that could account for a life.  We are in solidarity with all those who are victims of police brutality which we know vastly and disproportionately impacts communities of color.  Further, we believe there will be no justice until all police are held accountable for their actions.

There is so much work that needs to be done to assure that there are no police killings, no mass incarceration and no criminalization of People of Color.  This includes community-based alternatives to our criminal justice system.  We recognize that the dominant police culture is rooted in the false notion that white people are good, innocent, and can make determinations about anyone that isn’t white.  We feel white people have to take more responsibility for dismantling the race system, since it was created to benefit us.”

Giving a million or millions as a compensation for the murder is not fair and will never be fair.  Security officers who are supposed to protect the lives of innocent people intentionally murder a young LGBT person and the government comes up with a compensation deal, that is unjust.That means that the City Council is giving permission to arrogant police officers to kill innocent people because they will pay.  I say no to any payment.  The only thing they should serve is justice. Murderers must be brought to justice and punished accordingly.This is a sign of discrimination rejection and neglect, because I should expect to see the murderers serving life sentences in prison as a lesson to others who would think of doing such a thing,, not to hear about compensations: The best compensation would be to bring back Jessica not a million dollars.Speaking on behalf of the LGBT Community in Tanzania, I condemn the deal and all the people who are involved in the approval, they deserve to go to jail because they do not value Jessica`s life and even do not respect human rights : Again I repeat money can not buy Jessica’s life, cannot cover the gap in the Hernandez`s family, cannot give them the comfort.We cannot allow such a move of buying people`s lives and promote the violation.