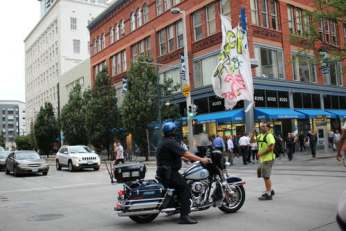 “The most offensive part were the closing statements where the prosecution basically used the fact that the defendant didn’t avail himself of reasonable accommodation for hearing assistance, I thought was extremely ablest and offensive.   I’m frankly embarrassed that a city employee would stoop to that level of argumentation.”

Those words were from one juror following the verdict by a 6-member jury that found Eric Brandt not guilty on charges of Obstructing Streets and other Passageways, and Disobedience to a Police Officer, but found him guilty of Pedestrian Walking in a Roadway, a traffic infraction. The charges stemmed from an August 2015 week-long direct action outside of Denver’s Lindsey-Flanigan Courthouse.

The juror who spoke to The Nation Report on condition of anonymity was referring to a moment in the two-day trial when Brandt, a US Navy veteran assigned to a nuclear submarine, and experiences a hearing impairment, asked for a hearing impaired headset provided by the court.

In closing statements, prosecuting city attorney Amy Twohey attempted to discredit Brandt’s testimony that he did not hear Commander Tony Lopez ordering him to step back onto a sidewalk during the protest.   Twhohey told the jury, “The defendant told you yesterday that he didn’t hear the order being given.  I don’t know if you guys noticed this or not yesterday, but at the beginning of the trial Mr. Brandt stopped the trial to announce that he needed a headset to be able to hear what was going on.  He didn’t use the headset the second half of the day, he didn’t use it when he was on the witness stand, he’s not using it now.  It’s up to you to decide the credibility of all the witness testimony.”

The juror responded to prosecution’s argument, “It was basically equivalent to seeing someone pull up using a handicap stall but not walking away with a limp and yelling at them because of that.  That’s abysmal.” 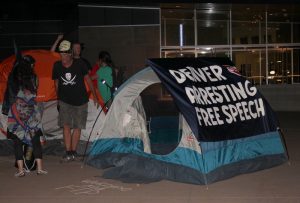 A weeks-long demonstration outside of Lindsey-Flanigan Courthouse educating jurors, promoting the rights of the disenfranchised, and protesting against police misconduct and threats to Amendment protections as shown on August 27, 2015. Demonstrators reported that the group was raided by police moments later. (photo: The Nation Report)

On August 28, 2015 Denver Police raided a weeks-long direct action outside of the Denver Lindsey-Flanagan courthouse resulting in Eric Brandt being on trial inside the courthouse.  Brandt has been arrested over 60 times in the past three years while protesting and has been acquitted of about 95% of charges ranging from disobeying a police officer, trespassing, and resisting arrest.

The August 2015 demonstration in support of people experiencing homelessness, against police brutality, and to educate the public about the right of jurors to nullify bad laws, also named District 6 Commander Tony Lopez as one subject of the issues raised by the demonstrators.  Lopez was accused by protesters of destroying a protest sign at an earlier August 2015 rally to inform potential jurors of their right to nullify what they see as a bad law, also known as jury nullification.  Educational events outside of the courthouse resulted in multiple arrests in 2015 leading to a federal injunction against future arrests of people passing out jury nullification literature and striking down curfews outside of the courthouse.  The case against the city of Denver will be heard in federal court in March.

A savant to some, a thorn to others – especially police – it’s hard to argue that Eric Brandt has not become a living icon in Denver and Westminster.  His symbolic theme draws scorns and hate speech from some, but for scores of others, he has come to represent all that is wrong with the criminal justice system nationwide according to comments of passersby.  Indeed, hundreds have asked him to take their pictures with him. 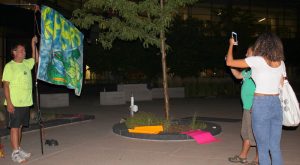 On a summer day last year, Brandt was seen holding his epic “F-CK BAD COPS” flag outside of the Lindsey-Flanagan Courthouse in Downtown Denver as he has for over three years.  A line of over two-dozen admirers was seen waiting with their cell phones ready to take a picture with him.  In a system where people of color are over-represented in the criminal justice system and by extension at Lindsey-Flanagan Courthouse, the line of fans also represented this disparity.

But his critics also form their own symbolic line.  Brandt reports being assaulted by critics because of his flag.  He has re-created the flag multiple times, often after he says the assailant had destroyed the flag in the attack.   Many yell “f-ck” right back to Brandt.

Brandt has memorized volumes of case law and local ordinances, and often represents himself in court.  Police know him, judges know him, attorneys know him, and social justice activists know him well.  His attorneys have been open to suggestions about legal procedure that Brandt chooses, and how he wants his case to proceed.  Brandt took the stand on Tuesday and said that he knows local laws and knows what he can legally do or not do during his protests.

Video evidence offered in court during the trial showed Brandt following next to a vehicle driven by Lopez as it was leaving the courthouse area following the August 28 raid.  Brandt then stepped into the street but backed up to the sidewalk when he said he saw oncoming traffic.  Brandt then stepped back onto the street and began following Lopez’ car when he realized his friend Adrian Brown had been arrested.  Lopez then stops his car and Lieutenant Tony Galloway exits Lopez’ car and chases Brandt across the courtyard in front of Lindsey-Flanagan Courthouse.  Then Brandt is seen abruptly stopping and raising his hands.  Adrian Brown was later cleared of charges and Brandt had his day in court on Tuesday and Wednesday.

Prosecutor Nevene Hullender in closing arguments attempted to steer the jury away from the First Amendment protections that the protesters were defending, “This is not a First Amendment case.” 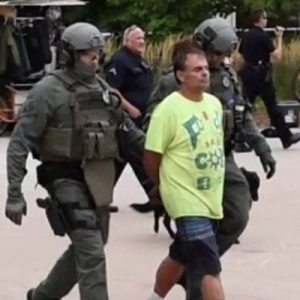 Eric Brandt wearing his signature message on a fluorescent green t-shirt is seen being arrested in Denver in 2015. (photo: Not My Tribe)

In opening and closing statements defense attorney Megan Marlatt took the position that police descended upon a peaceful protest using “overkill” when 35 to 100 officers drawing from many departments descended upon the area of 12-24 peaceful protesters, and that by the time Brandt was arrested, police were frustrated with demonstrators and showed this by confiscating personal property including protest signs and by repeatedly arresting protesters.

At a time when the Denver Police Department is scrambling to improve a crippled public image and is participating next week in a forum organized by Shorter AME Church and the Colorado Latino Forum, the issues raised at this trial do not weigh favorably to the police department.  Brandt accuses the courts of using the services of a judge who he says did not sign an Oath of Office, but produced one that bore a different date stamp than one that was originally submitted to Brandt upon Brandt’s repeated requests.

In a separate complaint, Brandt said that police overstepped their authority when the department failed to succeed in permanently removing protests and protesters from the courtyard in front of Lindsey-Flanigan, “Immediately the police misapplied codes regarding encumbrances and issued almost daily unlawful orders, making arrests for failure to obey those unlawful orders. Specifically, the City asserted a criminal consequence under color of a complex civil question expressly under the authority of Public Works; Denver Police in fact have no authority regarding encumbrances.”

Early in the trial, in a rare move, Judge Frederick Rodgers removed Brandt from the initial moments of his trial as Brandt presented challenges to how his case was being handled.

In another move by the prosecution, a motion was submitted by the city to re-seat the jury.  The original jury pool from which the final jury of six was eventually selected included several people who had experience with police misconduct including one former police officer who said that he knew that there were bad cops because he had worked alongside them, and that he had seen the damage that bad cops can do.  The prosecution motion was denied to re-seat the jury, and the resulting jury of six included all youth members, some of whom identified themselves as activists themselves working for social justice.

In a general jury instruction, Judge Rodgers instructed jurors to draw from their life experience to reach a decision.

The juror who earlier spoke to The Nation Report, turned to a member of Occupy Denver before leaving the courthouse and said, ” You guys all do really good work.  The jury all being fairly young people, we are tremendously sympathetic to the cause that Occupy represents and consider it a great honor to help participate in justice in a case like this.” 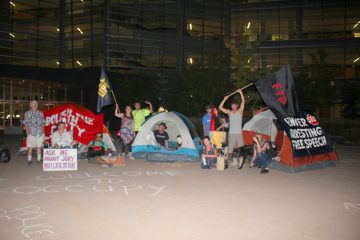 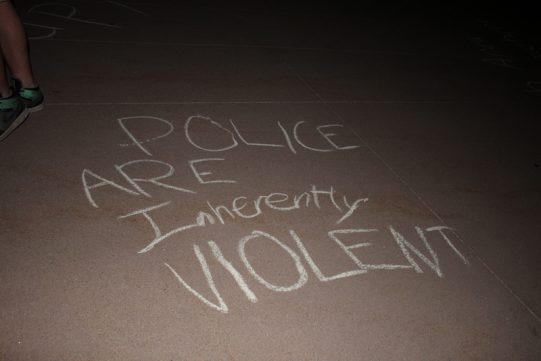