DENVER-The Saturday assassination of Honduran journalist Juan Carlos Argeñal Medina brings the total to 38 journalists who have been killed since the military coup which ousted the democratically elected president of Honduras, Manuel Zelaya.  Since then, the ruling party-the National Party-has been in control of the government and few if any of these assassinations have been investigated thouroughly enough to render prosecutions. Most, according to family members, human rights groups, and community members have not even been investigated.
Argeñal Medina, 43, was said by officials to be alone in his home in the city of Danli, el Paraiso when gunman entered and shot him in the head as was reported in La Prensa. Argeñal was a correspondent for Globo TV, a progressive media outlet that itself has received threats as well as acts of violence.  The station reported live during this November’s election, that they were experiencing several unexplained broadcast interruptions.  During the 2009 coup, the station also was subject to a military raid where the station was subject to equipment theft by the military also leading to interrupted broadcasting for over 3 weeks.
The Committe to Protect Journalists, a non-profit which researches attacks on journalists worldwide has written a statement to investigative bodies of Honduras to ” launch a full investigation into the murder on Saturday of a Honduran journalist, identify a motive, and bring those responsible to justice. “ 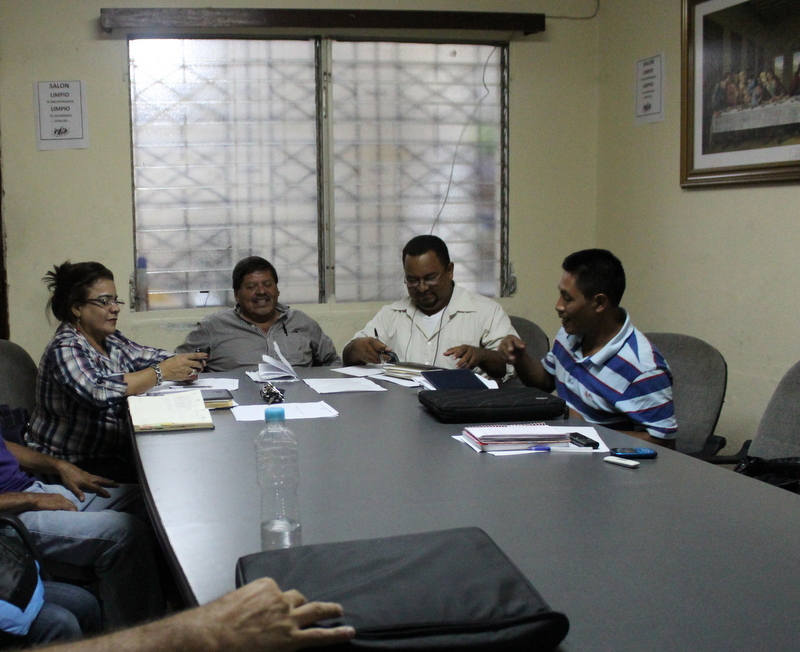 photo:  Ida del Rio/The Nation Report
Yoni Rivas speaks to U.S. human rights observers in November of 2012. He said that he has received multiple threats to his life and his name appears on the presumed hit list received by C-Libre. 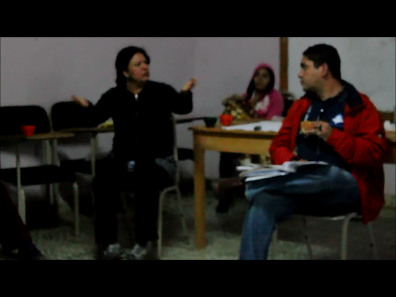 In this snapshot captured from video taken in November of 2012,
Berta Caceres (left) defends the community radio station operated
by COPINH, an indigenous human rights organization.  Caceres is
at the top of the presumed hit list received by C-Libre last month.
Video:  Tiburcia Vidal/The Nation Report
The Committee for Free Expression-C-Libre– has announced the receipt of a what they have concluded is a target list containing the names of people they believe are the focus of Honduran military intelligence and targets for possible assassination.  On the list are more journalists, lawyers, human rights activists, political artists, leaders of farming cooperatives, a priest, teachers,  LIBRE party members and even a member of their own group C-Libre.  Four persons on the lists have previously been interviewed by The Nation Report within the past year:  Felix Molina, a journalist for Globo and recipient of the 2012 Chavkin Award for Journalistic Integrity in Latin America, Vitalino Alvarez and Yoni Rivas both leaders in MUCA, an organization that defends the rights of small farmers in the troubled Bajo Aguan region of Northern Honduras and Berta Caceres, a Lenca indigenous leader of the group COPINH. 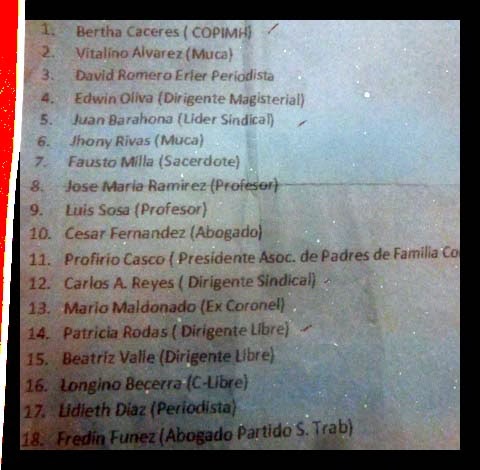 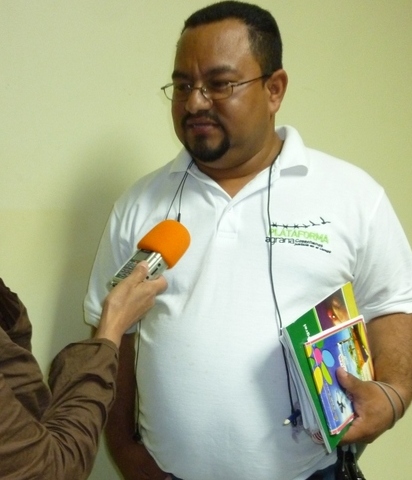 photo: Ida del Rio/The Nation Report
Yoni Rivas speaks to The Nation Report in November of 2012 about the movement to promote the rights of small farmers in the Bajo Aguan Region of Honduras.
According to C-Libre, the list was received from anonymous sources and wasn’t announced until after the election by the International Federation for Human Rights (FIDH).  C-Libre announced yesterday that they are putting on notice the “Executive Branch, the Special Prosecutor’s for Human Rights, the Armed Forces of Honduras, particularly the Directorate of Military Intelligence of the Armed Forces to clarify this situation and holds the State of Honduras responsible for any attack against the people listed.”  The group says that since those on the list work for the benefit of other people and the betterment of society that they are holding the Honduran authorities accountable for any harm that may come to those on the list. 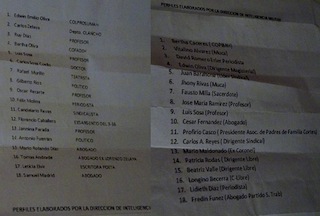 photo:  C-Libre
“We call on Honduran authorities to fully investigate this murder, including a motive related to journalism, and bring those responsible to justice,” said Carlos Lauría, CPJ’s senior Americas program coordinator. “As Honduras faces political tension resulting from the November presidential elections and prepares for a new administration, authorities must ensure that journalists can report the news and without the violent reprisals they faced after the events of 2009.”
Refufia Gaintan/The Nation Report
Please follow and like us: