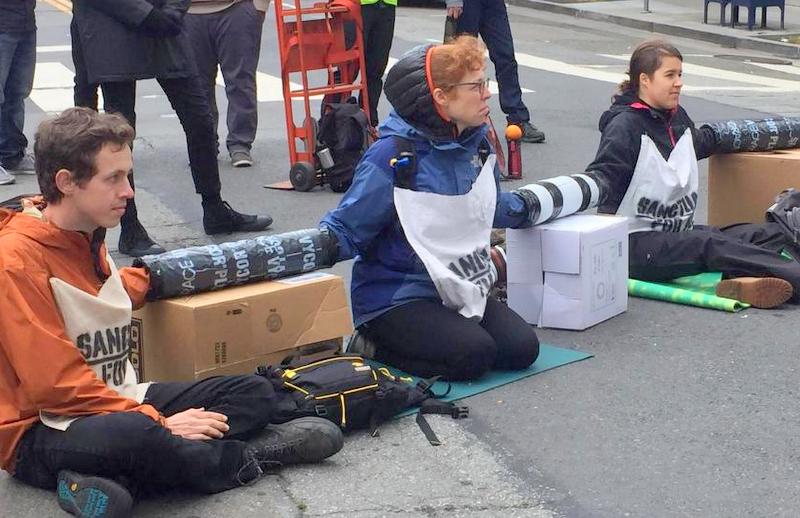 SAN FRANCISCO – “We want to share with the world that we will not take this and that we want to keep our community members safe.”

Those were the words from Bay Resistance, one of the groups who organized a lock-down, shut-down, rally, and march at the Immigration and Customs Enforcement (ICE) office in San Francisco on Wednesday.

The first sign that anything out of the usual was taking place in the neighborhood, was the parking of a moving van at one gate outside of ICE that quickly unloaded people and equipment.  Within 45 seconds, the group was locked down.

According to Bay Resistance and the other organizers, Immigrant Liberation Movement, Free San Francisco, and Causa Justa, over 100 people were organized within days of predicted ICE sweeps.

To the surprise of Oakland residents, Mayor Libby Schaaf announced probable ICE raids after receiving information from what she called “credible sources.”  Activists expressed shock at this announcement since they say that Schaaf has not shown a prior interest in supporting immigrants communities.  Schaaf is up for reelection in November.

In attempt to thwart the raids, an “emergency rally” was called that drew hundreds to the ICE office at 630 Sansome Avenue.  One group locked down at the bus entrance to the ICE building, another blocked Sansome and Lincoln streets, and another at Sansome and Jackson.  A rally took place near the ICE office, and then hundreds marched around the block surrounding the ICE office.  One person who locked down told The Nation Report that the group intended to stop buses from entering the area, and when asked how long the group would stay, she responded, “We’ll be here as long as we can.”

ICE has arrested more than 150 people in Northern California in the past few days and the group responded, “Donald Trump’s deportation force is threatening our neighbors and families with mass raids. This is nothing less than political repression against sanctuary cities, which are defending human rights!”

Angel was successful in getting his client free on bond, “Because of you and because of the dozen people that packed the courtroom to make sure that the judge knew that we were watching, and that we were not going to stand idly by.  The message we sent today is, ‘ICE we’re watching you.’  But it was a message to immigrants themselves that we will not stand while there are injustices in this country, not only against immigrants, but against all working class, and people of color that are right now under attack under this administration.”

Angel pointed to the number of ICE officers who were standing on the street and pointed to the success of the action, “[That ICE officers are here] means they’re not out in the community, arresting our people, violating our rights, using Gestapo tactics against immigrants.  Because that’s what they did against my client Jesus.  When you were all chanting ‘Shut down ICE’, when you were out here drumming, making sure that this building did not go through business as usual, when 150 people were targeted and arrested and were racially profiled because of their immigration status in this country, you made sure that you were going to disrupt them the way that they disrupt us.”

On Tuesday the US Supreme Court ruled in Jennings v. Rodriguez that immigrants, including those with permanent legal status, and asylum seekers can be held indefinitely in detention and do not have the right to bond hearings:

“Immigration officials are authorized to detain certain aliens in the course of immigration proceedings while they determine whether those aliens may be lawfully present in the country.”

Angel condemned the ruling, “What this actually means for all of us in our communities is that this is now a legal, modern concentration camp system that is facing down on immigrants.  So we need more of these actions.”  He encouraged the crowd to continue similar actions across the state, and further called for similar actions across the country.

The action ended after about four hours of blocking entryways when activists unlocked themselves.

In a final statement, organizer groups said, “Sanctuary cities and states are on the right side of history. Local governments must stay out of the business of deportation and refuse to help Trump deport millions of our neighbors, loved ones, and friends.” 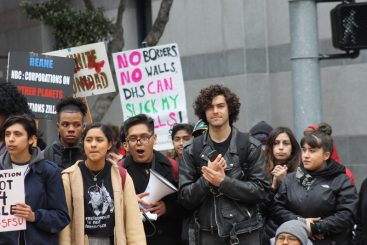 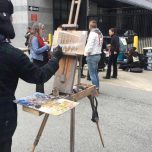 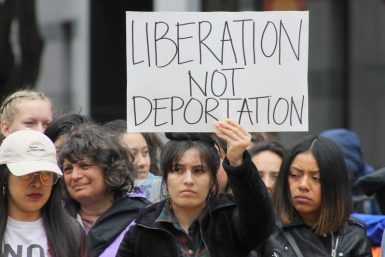 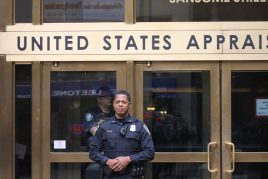 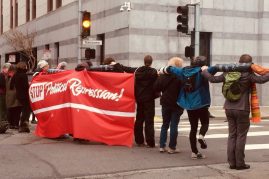 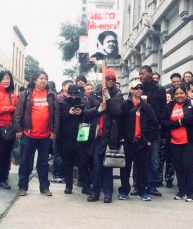 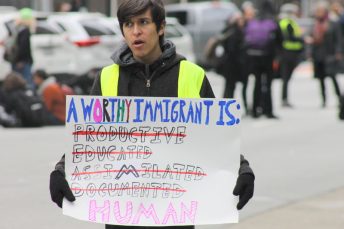 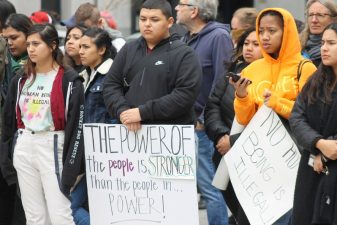 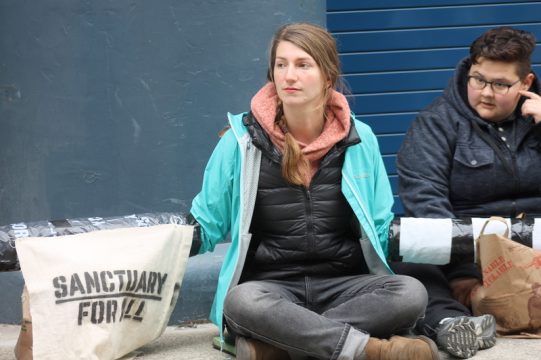