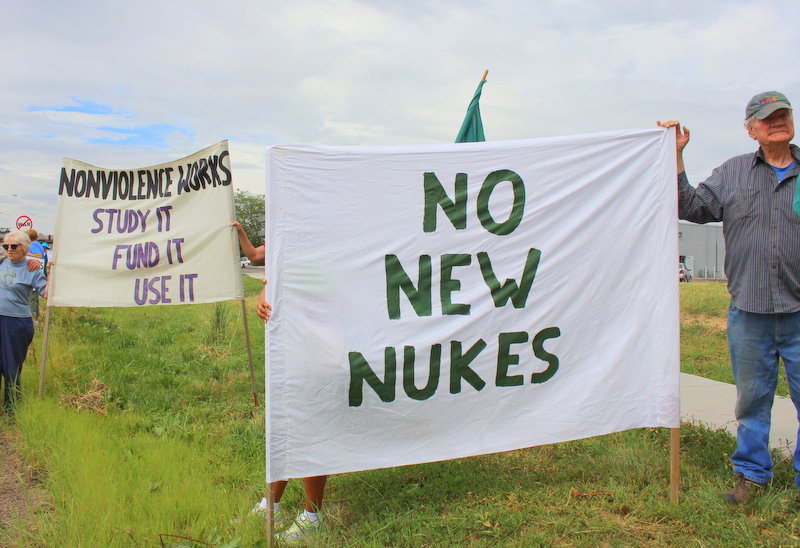 COLORADO SPRINGS-Peterson Air Force Base is accustomed to peace activists outside of its gates. Those working for peace regularly show up to call for an elimination or at least a halt to new construction and development of nuclear weapons.

Today several groups participated in a peace demonstration at the gates of Peterson from across the state including from the Nuclear Guardianship Collective of the Rocky Mountain Peace and Justice Center, the Denver Justice and Peace Committee, and Pikes Peak Justice and Peace.  The event was organized by Citizens for Peace in Space with the intention of commemorating the victims of the 1945 US bombings of Hiroshima and Nagasaki that are reported to have killed over 100,000 people and injuring many more.

Activists also called for the removal of 49 hydrogen bombs across the state that remain on 24/7 alert in Colorado.  One such variety was first developed in the early 1970s and carries three nuclear warheads, the Minuteman III Intercontinental Ballistic Missile (MM III ICBM), instead of an earlier version which carried one.

Peterson AFB is also the location of the Colorado Springs Municipal Airport, and formerly hosted the North American Aerospace Defense Command (NORAD) which was later replaced by the United States Northern Command(USNORTHCOM) where its headquarters is located.  The headquarters of the Air Force Space Command in charge of military space assets also includes a multitude of weapons.  The Northern Command is charged with coordinating all defense incuding against terrorist threats for both Canada and the United States.  Several Canadian personell are based at Peterson.

Al Nook of Colorado Springs said that he first came to Colorado at age 18 as a conscientious objector to the Korean War. 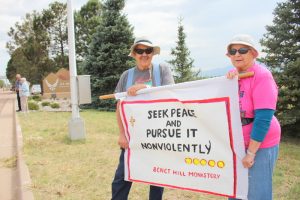 Al Nook (left) of Colorado Springs has been a peace activist since he was 18-years old.  Sister Therese O’Grady (right) is a Benedictine sister from Bennett Hill Monastery.

He has since been working for peace including at the gates of the Rocky Flats Nuclear Weapons Facility outside of Golden, Colorado in the 1970s.  He said that the public is shielded from war, “People today aren’t confronted with it like they were in Vietnam and Korea and World War II.  It’s polished much differently now.  I think we have to work at it much harder.”

Sister Therese O’Grady, a Benedictine, said that she hopes to never see a Hiroshima or Nagasaki recurrence but agreed with Nook, “We are proliferating nuclear bombs and I don’t think most people are aware of that.” 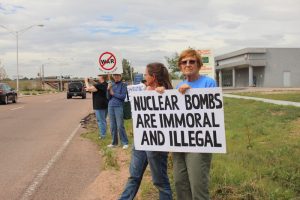 Betty Kerwin (right) said she has rallied for peace at Peterson on many occasions.

Betty Kerwin remembered the last time she protested Peterson with her husband Tom, a fellow peace activist whom she lost earlier this year, “War has become sterilized by drones and bombs where the people who press the buttons are actually not feeling combat.  Perhaps it makes it easier to make an enemy to kill.  I don’t feel that warfare, and certainly nuclear warfare, has any place in today’s world.”

Army veteran Matt Stys of near Colorado Springs first entered the Army in the 1990s and was deployed to Iraq in 2007.  He reflected on the beauty of the Colorado mountains and the freedom to enjoy them as valuable to protect.  But upon arrival to Iraq he came to realize that he was there to protect the movement of trucks and equipment owned by private corporations, “My service in Iraq wasn’t to help provide democracy or help secure democracy.  I’m working in entry control point just to make sure corporations get there equipment in.”  He was initially told that there would be a temporary occupation but he soon learned that US presence was leaning toward permanency. 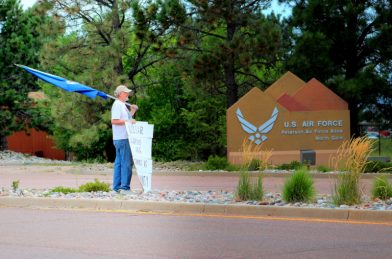 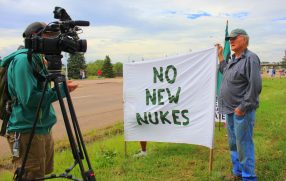 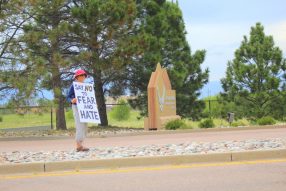 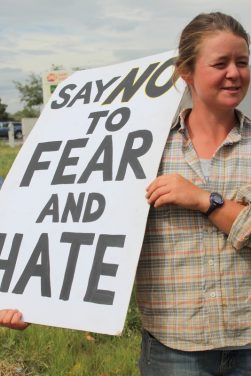 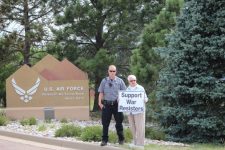