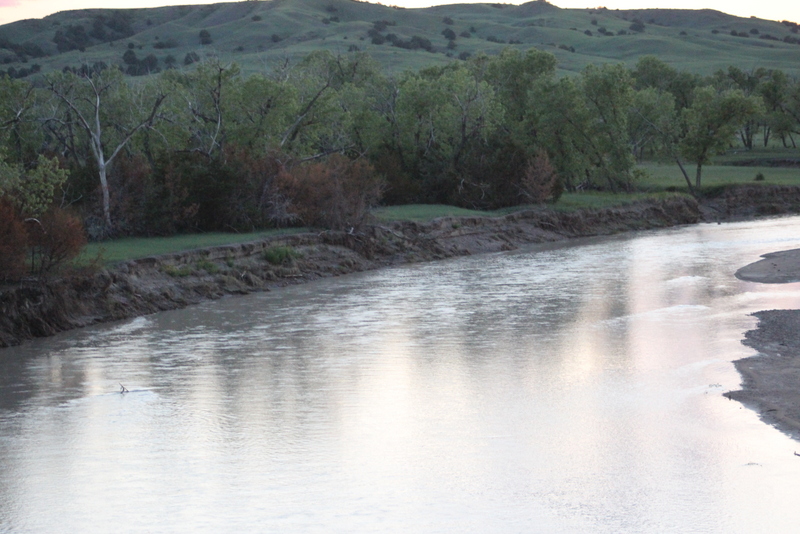 photos: Tiburcia Vidal/The Nation Report
The Cheyenne River in the Cheyenne River Reservation, South Dakota is one river that is considered at risk for contamination by the Keystone XL Pipeline.

EAGLE BUTTE HOMELANDS, SOUTH DAKOTA-Today TJ Afraid of Hawk, Robin LaDue, and Wani Loud Hawk assumed a centuries-old tradition of protecting the same staff that their ancestors used to lead the Lakota Oyate into significant events. Upon the transfer their elders told them during a Hunka ceremony that they are immediately charged with protecting the Cheyenne River from the toxic chemicals that are expected to contaminate the Cheyenne from the proposed Keystone XL Pipeline if the Pipeline is built. Members of the Lakota Oyate said that contamination is the most urgent and pressing danger of the current generation.

Originally crafted in the 1870’s, the staff is covered with buffalo skin, a blue flag is affixed to the top and is said to represent the sky, a black flag represents direction, a red for the native people and a green flag represents Mother Earth.  Elder Rocky Afraid of Hawk who passed the staff over said that it has been stored since 1973, the date which he assumed care of the staff when he was charged with tribal duties some forty years ago. 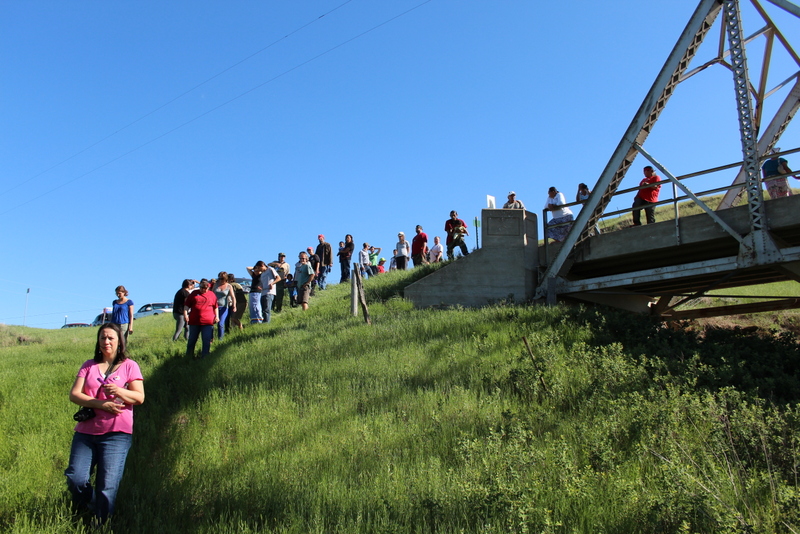 Invited guests descend to the Cheyenne River to participate in the Hunka ceremony.

In a statement to The Nation Report TJ Afraid of Hawk who was one of three tribal members to accept tribal duties said that she took over the responsibility because that’s how her family was raised.  She said that she along with the others are stepping up to educate the people about the Keystone XL and that according to the Wakta Wasté or Lakota,  accepting the staff meant accepting the responsibilities.  The Hunka ceremony was symbolic to signify their–all three recipients’–commitment to the struggle especially Keystone where she said a lot of lies have been told, “You can lie to anybody but you can’t lie to the Great Spirit. “ 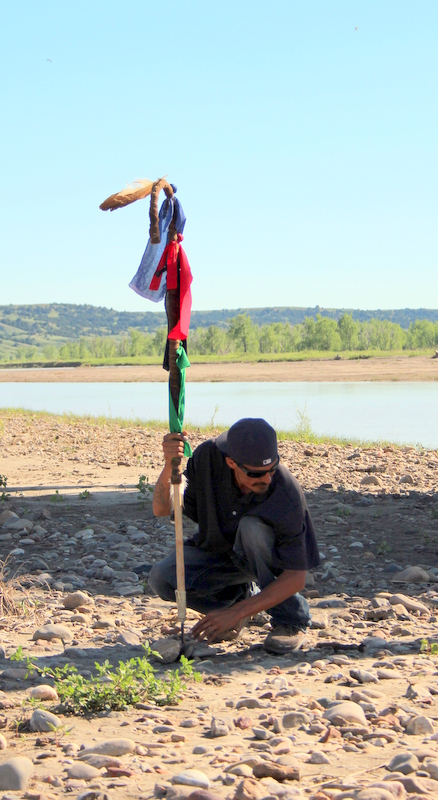 The one hundred thirty-year-old staff is set in the ground before the ceremony. The Cheyenne River is in the background.

During a nonviolent direct-action training held before the ceremony, it was revealed what those lies have been according to organizers.  At the training, hosted at the Cheyenne River Reservation in South Dakota, Rocky Afraid of Hawk said that Transcanada–the corporation that is building the Keystone XL Pipeline-has lied about the location, the contamination, and the safety issues to the environment.  That statement was repeated by the more than 150 people who came to the State Department public forum on the Keystone XL in February in Grand Island, Nebraska.  Sixth generation farmers along with multiple generation Indigenous Nations testified that Transcanada had lied to them about various issues related to the Pipeline including environmental damage, compensation, safety, and other issues such as claiming eminent domain status of being a common carrier.   Testimony at the Grand Island event and the Cheyenne River training both criticized the government for lack of oversight of the oil industry.  The nonviolent direct-action training that coincided with the Hunka ceremony was held to prepare the more than five nations who attended the event to resist Pipeline construction. 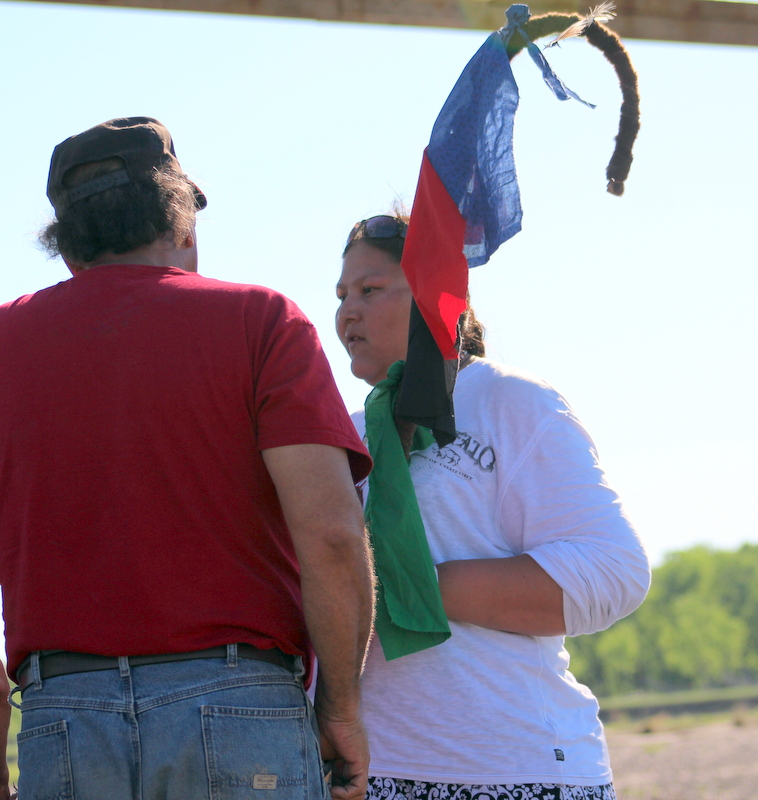 Robin LaDue who also accepted responsibility to carry on Nation traditions said at the ceremony,

The Keystone is an important issue to our people.  If we don’t get involved with this issue of stopping the Keystone Pipeline, we’ll be more hurt than we’ve ever seen in our lives because of the devastation that this pipeline is going to bring.  I believe that a lot of  people aren’t telling the truth about the destruction that it’s going to bring.  You can see how it’s damaged our relatives to the north in Canada.  This isn’t just a Native issue.” 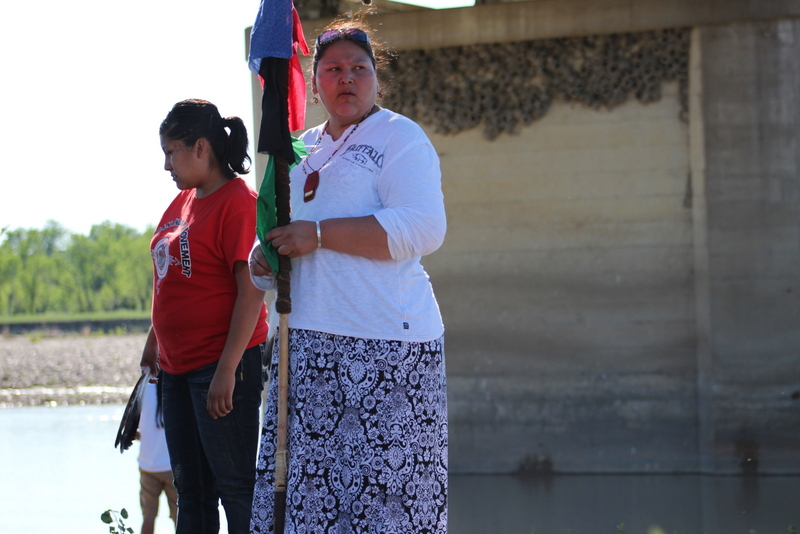 Transcanada rerouted pipeline construction when damage to the Ogallala Aquifer drew an uproar from different communities nationwide  The Lakota say that the new route 20 miles away is still in line to pollute rivers such as the Cheyenne,  the Missouri, the Wide, and the Niobrara.  The Hunka ceremony reaffirmed commitments to protect sacred water, treaty rights, and human rights.  Rocky Afraid of Hawk said in closing the ceremony that “Together with all of our relatives coming from all over the country, we will help each other out wherever we can to stop the Pipeline.”