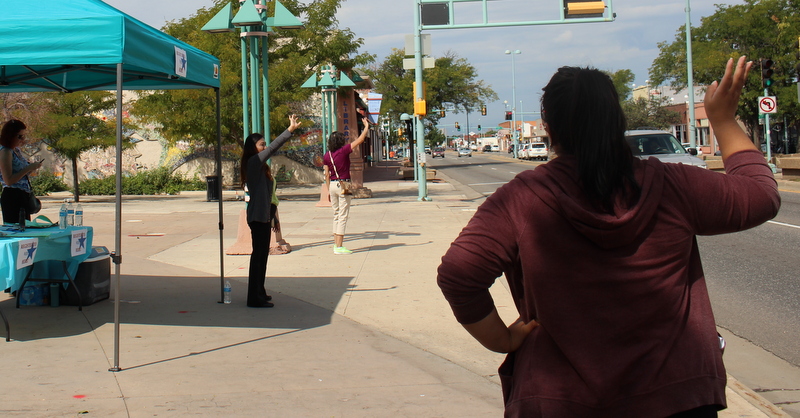 Voter registrars wave to motorists on Colfax Ave. in Aurora to remind them to register to vote. (photos: The Nation Report)

A joint effort to register voters without a permanent address or are in transition, culminated in a voter registration station outside of the MLK Aurora Public Library on East Colfax on Tuesday.  Registration advocates waved down motorists and talked to passersby asking people if they were registered, and if not, provided registration forms and a bottle of water on a 95 degree day.

Co-hosted by Aurora Warms the Night, Mile High Behavioral Health Center and the Comitis Crisis Center, Colorado Secretary of state, Metro Community Provider Network, Close to Home, Colfax Community Network, and the Aurora Mental Health Center, PATH Program, the effort was the work of several organizations including the Comitis Crisis Center Community Impact and Government Relations Liaison James Gillespie who told attendees, “Even though you may not have a home, you still have a voice in our country and in our democracy and we’re excited to be able to engage the voter voice of those experiencing homelessness.  Many people are homeless here in Denver metro specifically because they might have lost a job or can’t find a job.  They may have experienced divorce or become sick in their family, so homelessness can really happen to any one of us.  Everyone really needs a safe place to call home.  Today we’re gathering to be that voice and re-engage that voter voice for those who are experiencing homelessness right here in Aurora, Colorado.  Those who are experiencing homeless, if anyone, should have the ability to vote, and to weigh in on housing policy and funding decisions made by our elected officials.”

Colorado Secretary of State Wayne Williams joined the effort when he said his office was invited by a colleague who is on the board of the Mile High Behavioral Health Center,  “We want everyone to have the opportunity to participate whose legally eligible to do so.”   Williams’ office announced on August 17 that potential voters can now register by text to the state, “Colorado is one of the leaders in making voter registration available online.  If you text CO to 2vote, that will pull up a registration opportunity.  We all have much at stake in what’s going to happen.  I see several members of our city council here.  They have their own elections.  And the decisions made by city council are important, school boards.  All of these, not just president, help shape the community we live in.”

More specifically he referred to the last presidential election when speaking to The Nation Report, “In Colorado, four years ago we had 600,000 people vote for president who then didn’t vote for governor so there is more attention in presidential races.  Obviously I think it’s important to vote in every election.  Whether it’s a city council or a school board because oftentimes those local folks are the ones making the decisions that more directly impact on folks than those at the national level even.”

A resident who wanted to be identified as “R”  who came to the event agreed with Williams that the coming of a presidential election is persuading her to vote and talked about why she has had difficulty voting in previous elections, “I have been unfairly disenfranchised from voting largely because of the number one factor in my case is economic hardship.  The main obstacle to get down here today was lack of transportation other than my feet.  Colfax Community Network was able to coordinate with the only emergency shelter in Aurora to provide transportation down here and back to register.  Geographically ever since the process of voting has changed, when you used to have a set voting place, then [voting precincts] became election centers and then I dropped out of being up to speed on it because of circumstances.  I have not been able to actively participate in the voting process.”

At Tuesday’s event, interpreters for Spanish, Vietnamese, and Cambodian speaking voters were provided to assist in registering to vote.  According to a media release sent from the Office of the Secretary of State voting records showed that 1,499 active voters used the St. Francis Center, a homeless refuge in Denver, as an address to register to vote, 72 used the Denver Rescue Mission, and 71 used the Samaritan House.  In Aurora, 7 are registered at Aurora Warms the Night and the Comitis Crisis Center.

“Every eligible elector has the right to vote in Colorado, Secretary Williams said in the advisory, “The fact that you have no fixed permanent home has no bearing on your right to vote.” 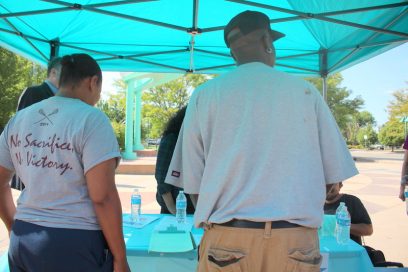