Two members of the Rocky Mountain Peace and Justice Center (RMPJC) were applauded by the audience when they asked the Denver Public School Board (DPS) on Thursday to adopt a policy to keep kids away from the former nuclear weapons plant, Rocky Flats.

Chris Allred and Andraa von Boeselager along with others from the RMPJC have been making the rounds to area school districts, warning officials of the residue plutonium and other radioactive contaminants that remain in the area from years of weapons production in the middle of the last century at the plant.

So far, all but Jefferson County have agreed with the data that children are at risk of exposure to these contaminants and have prohibited field trips to the area.  In March of 2017, Boulder Valley School District became the first to ban field trips.

“I would like to request that Denver Public Schools also make a resolution to not allow field trips to Rocky Flats, Allred asked the board followed by applause, “This is an urgent matter of public health for all students in the Denver metro area because US Fish and Wildlife plans to open Rocky Flats in the summer of 2018.”

In 2017, the US Fish and Wildlife Service held a series of police-guarded community meetings presenting plans for a visitor center and maps for proposed trails.   Officials from US Fish and Wildlife were met with public contention at these meetings where members of the public voiced their opposition either vocally, or with signs.  Some interrupted officials calling their comments about safety at the site lies and misrepresentation.

Members of the RMPJC Nuclear Guardianship group began a campaign to protect area children from potential field trips to these areas, and have been successful to persuade five districts to agree with them. 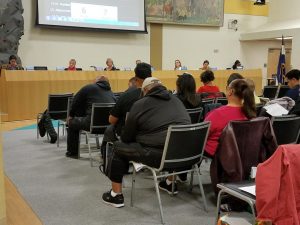 At its regularly scheduled meeting, the DPS board was presented with maps of the remaining contamination that highlighted levels of plutonium, uranium,  trichloroethylene, and vinyl chloride and of a 2016 study that showed the increased levels of rare cancers among those living downwind from the plant by Allred, “Rocky Flats National Wildlife Refuge is surrounding an active Superfund site which is an EPA designation of the most contaminated sites in the nation.  please compare the next map of proposed trails at Rocky Flats to see the close proximity of trails to the contamination.”

Andraa von Boeselager reminded of the weapons grade plutonium that was produced at Rocky Flats over the course of 37 years and of the 1989 FBI raid of the plant for environmental crimes and the contractor and the plant admitting the violating the Clean Water Act.

Von Boeselager acknowledged that as time passes, fewer people are aware of the potential risk the site poses to this day, “Most people don’t even know what it is.”

Years of secrecy about the risks preceded lack of public warnings and it wasn’t until the 1970’s that a more informed public took steps to close the plant.  Some of those actions involved sitting on the railroad tracks to prevent trains from entering and exiting, and a full encirclement of the site by those who wanted the plant to be closed.  A 40-year anniversary of that activism is planned for later this spring.

The board did not have on its agenda to hold a vote in support of a resolution at this Thursday meeting.  The Nation Report will update if a resolution or policy is adopted in the future.