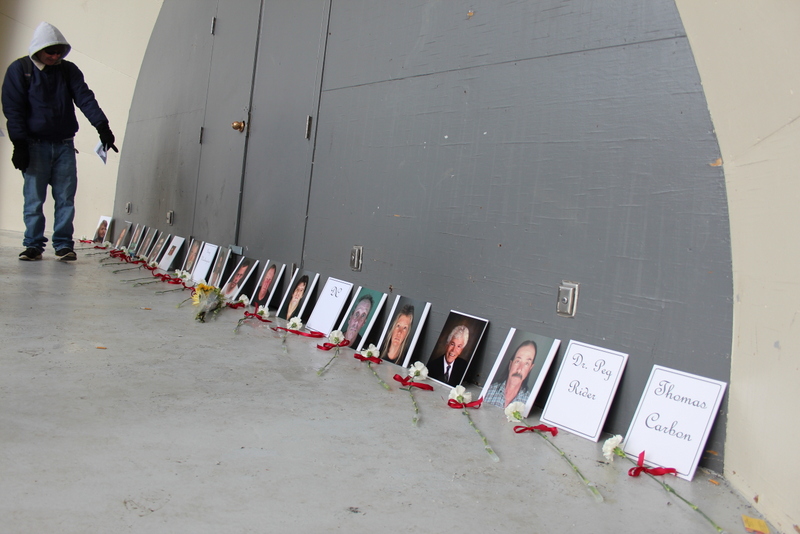 BOULDER-The winter solstice is tonight and the Bandshell in Central Park in downtown Boulder was the location of this year’s Annual Homeless Persons’ Memorial Service.  The event took place as it has every year on the longest night of the year to remind the public of how long the night is for those who are sleeping outside.  The memorial recognized nineteen people who have died in the past year.  Although the cause of death varied, speakers at this year’s event wondered how to this day, people are still being found frozen to death in the city of Boulder. 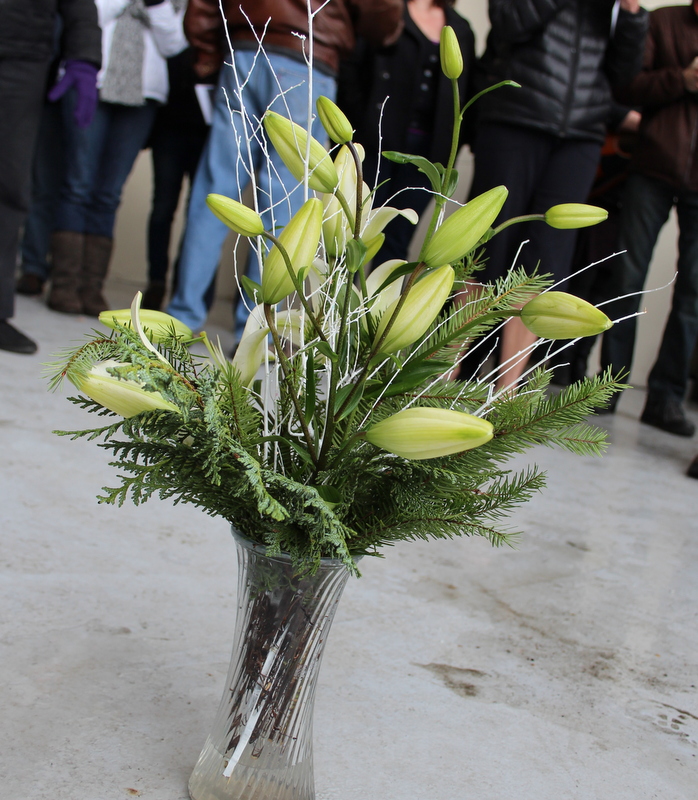 The City of Boulder’s Human Relations Commission was a co-sponsor of the event.  This year three City Council members attended the event.  Council member Lisa Morzel read the Proclamation on the National Homeless Persons’ Memorial Day, “Be it declared by the City Council of the city of Boulder, Colorado that December 21, 2013 is National Homeless Persons’ Memorial Day.” 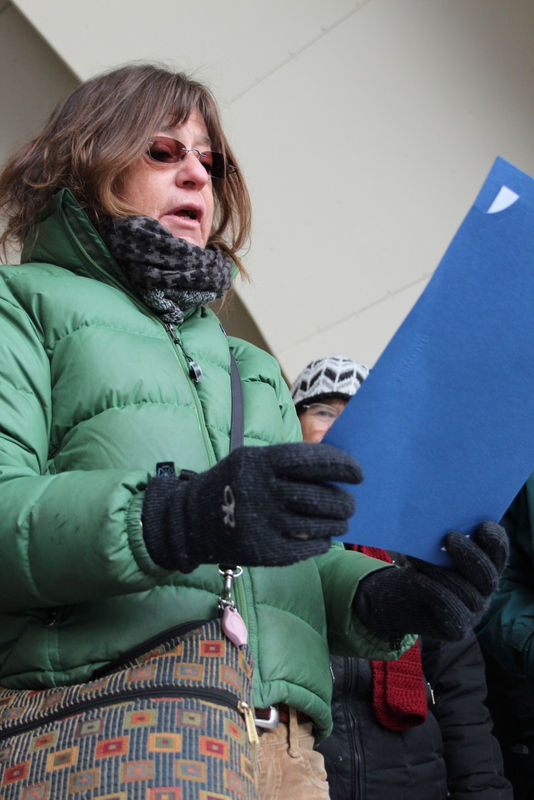 Joy Redstone has organized several memorial events and said that the proclamation means that the country as a whole sees this problem that used to be invisible and it reminds us that the solutions are local.  Council member Macon Cowles told The Nation Report that he’s particularly concerned about the number of homeless children in Boulder, “I’m glad and really moved to be part of this celebration today because seeing fifteen people die in your community of cold during the year really causes you to dig deep.  And I’m particularly struck [by] actually in Boulder we have a lot of children who are homeless.  And forty percent of them in Boulder County, forty percent of the kids who are homeless are people who have been thrown out of their homes because they’re LGBTQ.  And we have to help people learn to be kinder, more accepting of the people in their families and in their community.” 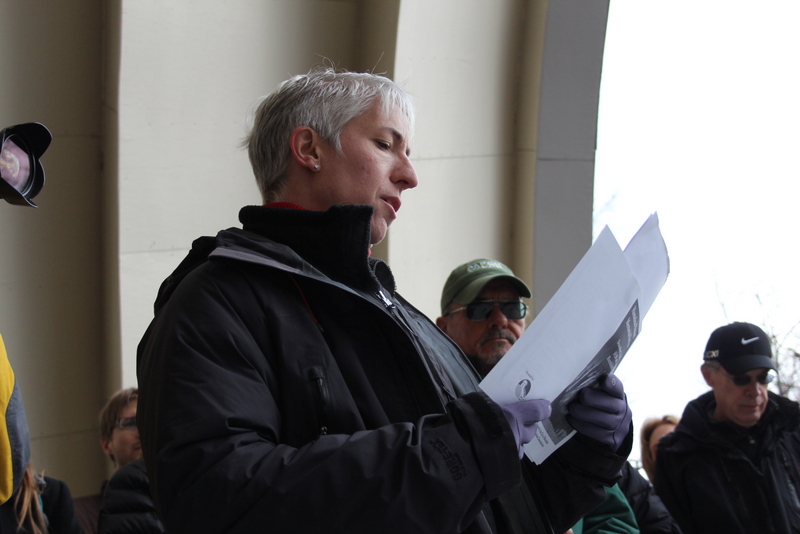 The Boulder City Council has come under criticism in the past for lack of support for the needs of those without a home, particularly with the passage and enforcement of the municipal ordinance outlawing “camping” or sleeping outside at night with protection such as a sleeping bag.  Andrew Shoemaker, who is newly elected to City Council said that he hopes to raise the issue at the Boulder City Council upcoming annual two-day retreat, “I can’t speak for the entire Council because we haven’t talked about it yet but I’m certain that no member of City Council wants to attend a memorial service for the homeless.  No one wants the homeless to pass away or anyone for that matter.  In terms of making things better for the homeless, that’s certainly a priority of mine, is to improve housing in this city and to improve services for the homeless and I think that there’s a group of us on the Council that are going to be very interested to improve services.”  When asked what message he would have for those in attendance who would be sleeping outside tonight Shoemaker responded, “Hold out hope.  And I would go to the Bridge House and see what services they have.  And I would try to find a way to work your way out of this and get to a point where you can have housing.” 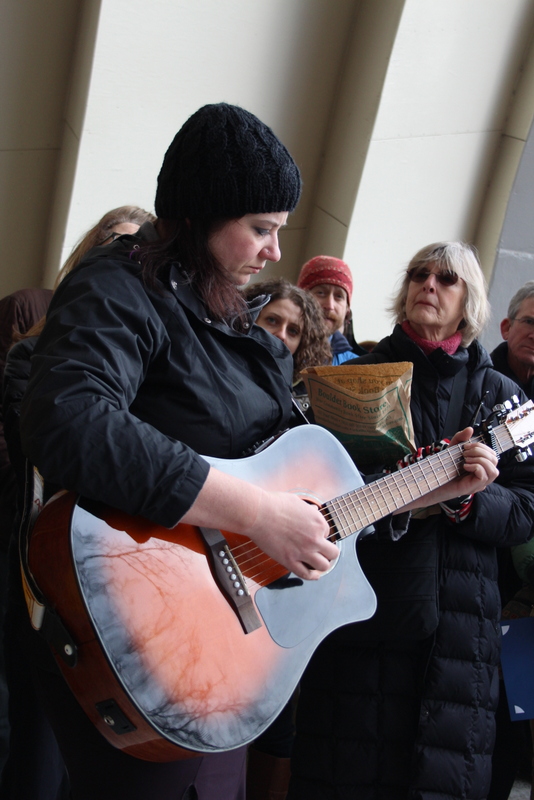 This year’s event saw a record number of people-around 200.  Pastor Roger Wolsey is the Director of the Wesley Fellowship Foundation and has attended many years of Memorial events at the Bandshell.  He commented on this year’s turnout, “Each time I’ve felt rather embarrassed by the small turnout because of the visible homeless situation in Boulder.  People should be mindful and aware and it’s awkward that such a small number of people show up.  Last year it was especially acute because just a week after this was the memorial service for the elk who was shot by the police officer and many, many, many, many Boulderites showed up for a memorial for an elk.  That was a tragic thing and it’s worthy of recognition but it’s embarrassing that everyone showed up for that and hardly anyone showed up for this recognition of actual human beings, brothers and sisters who died on the streets.  I’m just grateful for whatever happened this year for people to learn about this and to get the word out possibly because they’re aware that most of us are only a paycheck or two away from being homeless ourselves or an injury or illness away from being homeless ourselves.  Whatever it was that allowed it to take place, I’m so glad that 5-6 times as many people as normal showed up today.” 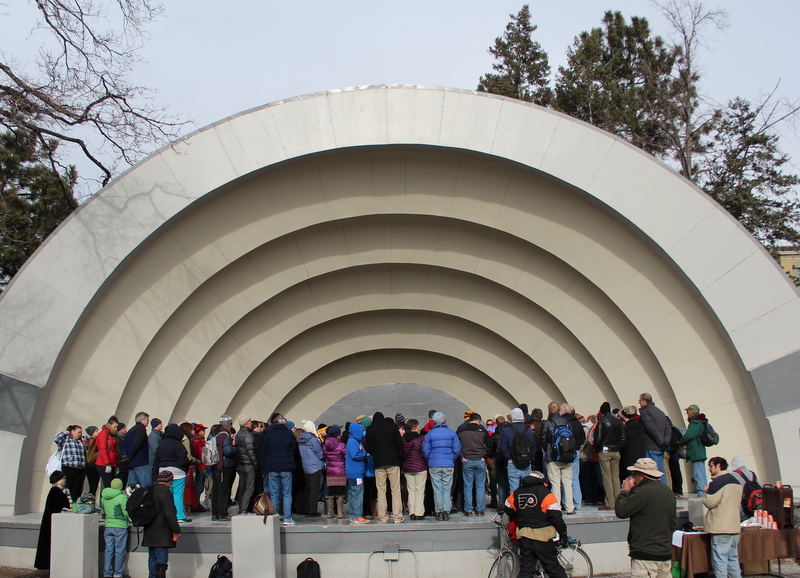 Music was performed by Alma Orr and the Boulder Threshold Choir. 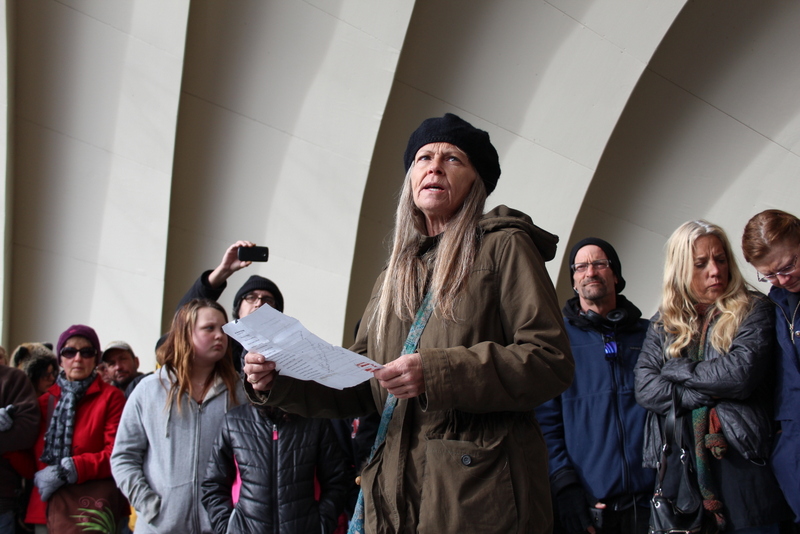 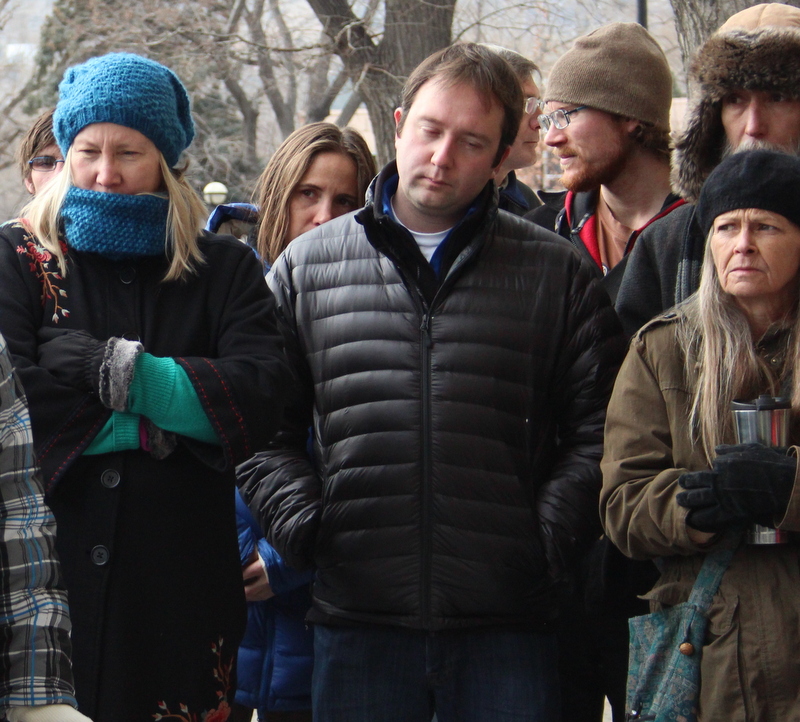 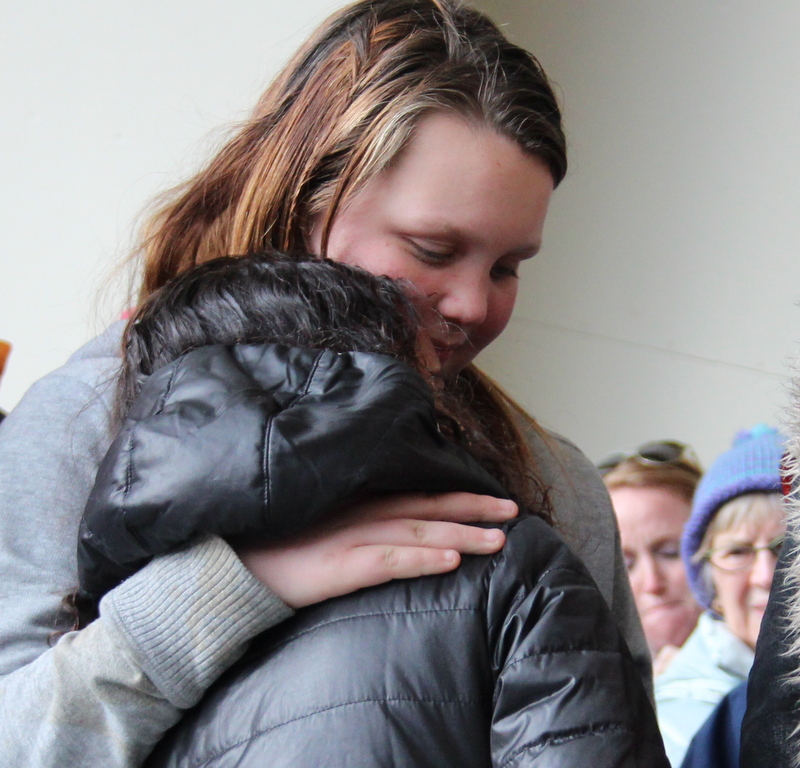 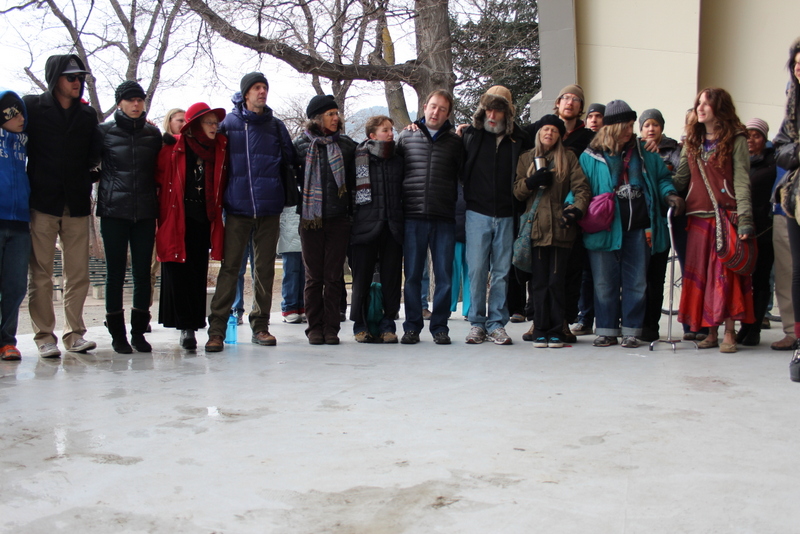 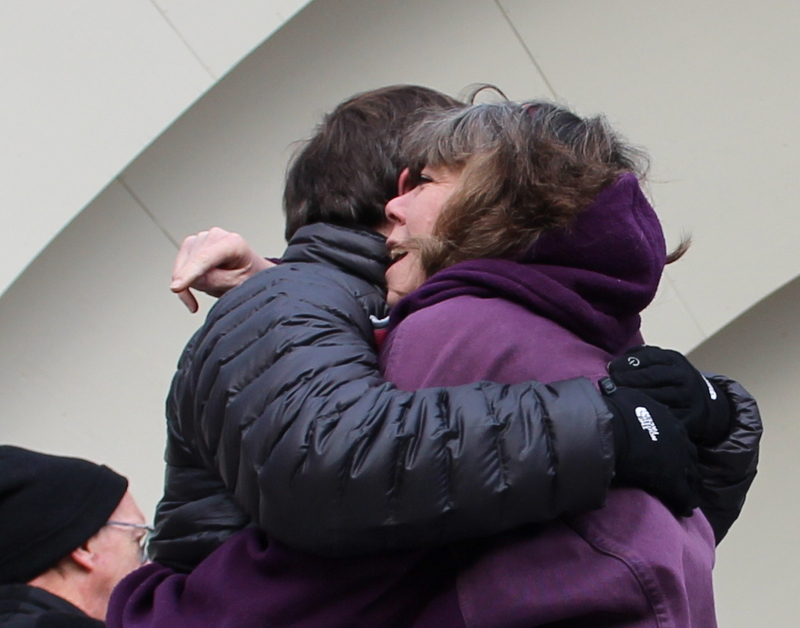 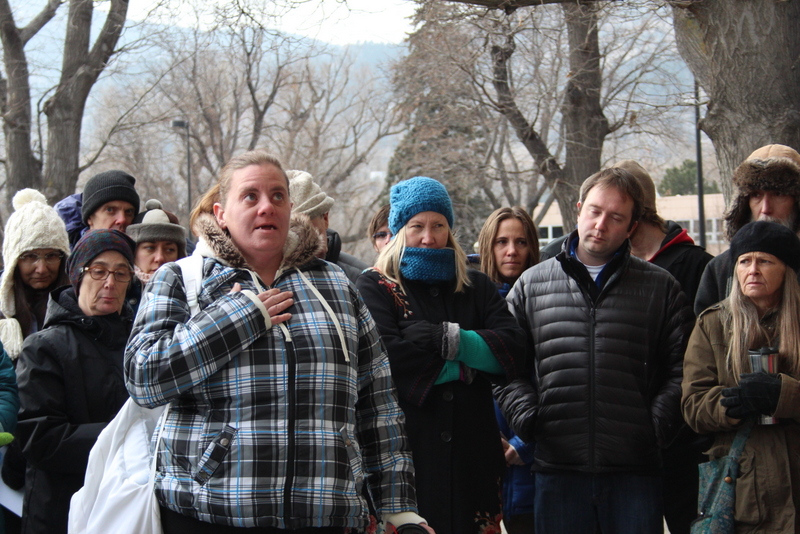 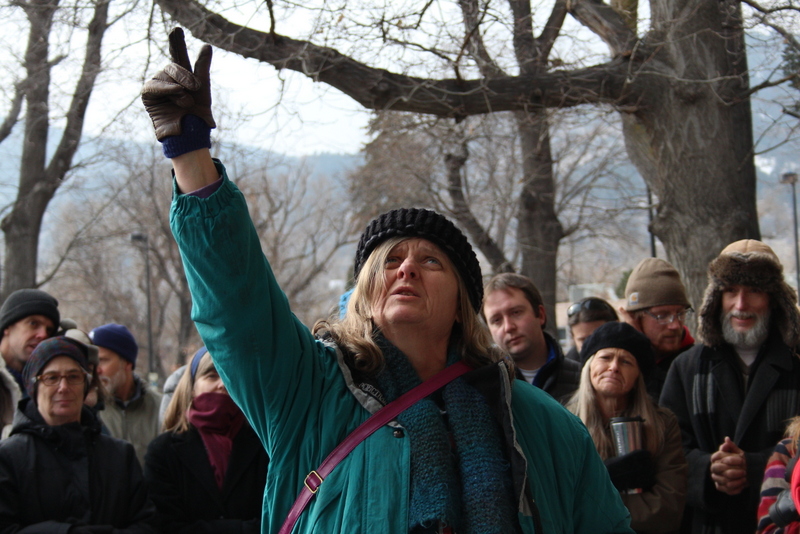 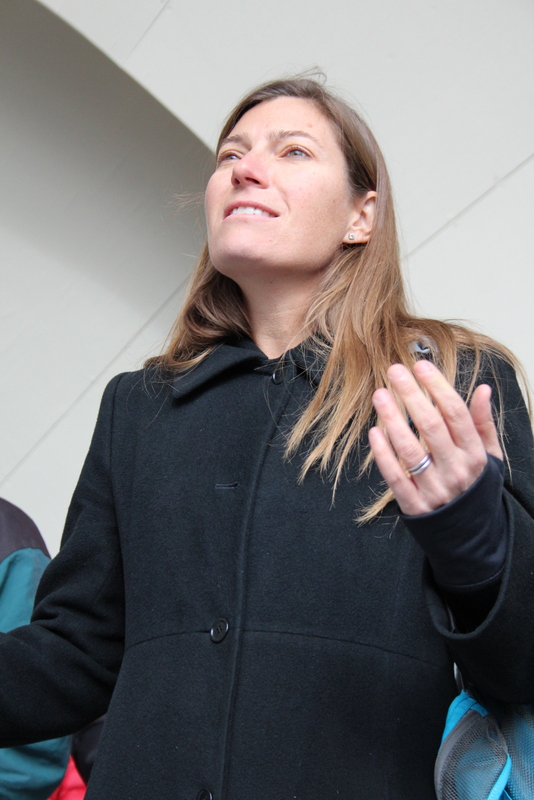 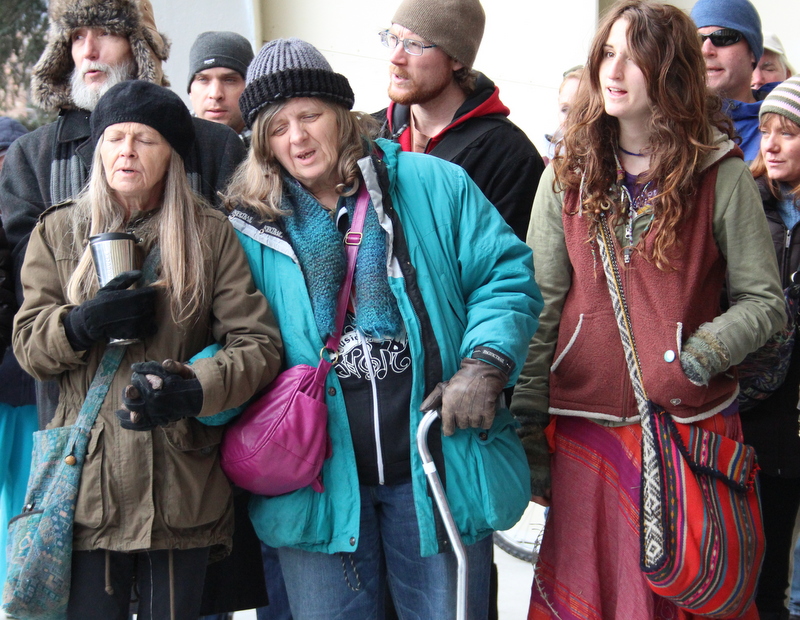