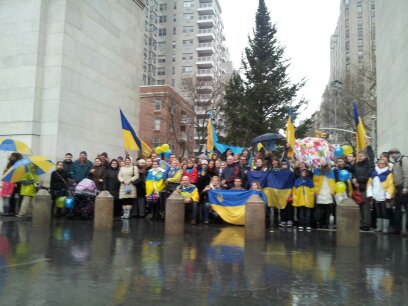 NEW YORK-The number of Ukrainian protesters expanded again after a Christmas holiday break from holding vigil in Independence Square in the capitol Kiev.  It has been since late November that those in favor of a European association agreement-that was rejected by President Viktor Yanukovych-took to the streets.  Yanukovych instead strengthened ties with Russia by selling 15 billion in government bonds and landing an attractive deal on the price of imported natural gas.

But despite the reasons, protesters at the center of Kiev seemed set on confronting the President no matter what.  Loading cars and even mounting bicycles to make the 15 km trip to his private residence outside of Kiev they took the protest directly to him.  Some  protesters carried coffins that they said symbolized the death of Yanukovych’s presidency.  Riot police however held the group at a distance by forming a police line of shields.

And in New York today, supporters and family members of the opposition to Yanukovych weathered a heavy downpour of rain in New York City to rally support for protesters in Kiev.

Kristina Mathinou stood in the rain to attend the protest.  She was born in Ukraine but now lives in New York.  She said that she felt a responsibility to her family and friends to stand up for them,

“I’m Ukrainian.  I was born in Ukraine so it literally hits home.  I’ve honestly never fought for anything in my life.  I’ve never supported much.  This is effecting my family and where I’m from, my upbringing, my culture.  I feel like I have to take a stand and support as much as I can because I can’t actually be there.  I’m doing whatever I can from overseas.

I think it’s actually doing so much good for the country because we’ve been very separated as a country like western Ukraine and eastern Ukraine because the eastern part is closer to Russia.  They speak Russian predominately there.  While the western is very patriotic nationalist.  I’m from western Ukraine.  And a lot of people in eastern Ukraine are also with us.  They’re supporting this as opposed to wanting to stay with Mother Russia.  So I do think it’s bringing everyone together.  And it’s for a good cause, peacefully protesting.  It’s kind of fun.  I’ve never been a part of anything like this.” 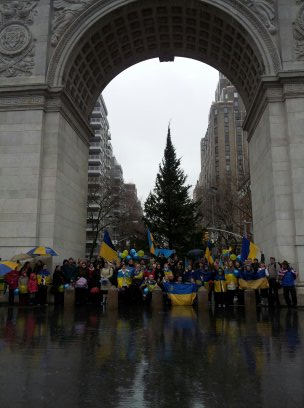 Ivan was born in Ukraine but now lives in New York.  He said he supports integration into the European Union so that Ukrainians would have greater access to opportunities that the European Union would offer.  (The following is a translation by The Nation Report’s Faustina Bañuelos.)

“For the integration of Ukraine into the European Union.  Ukrainians hope to be part of Europe because Ukraine is at the center of Europe, but they are not part of the EU.  People live poorly, everything is bad.  Kids want to study at European Universities and be free to learn in Europe.  If it were like this, people could live like Europeans or like Americans in the US.  So we in New York stand with the people in Kiev for the integration of Ukraine into the EU.”

Ivan added that he hoped most for democracy in the country, “I want for journalists to speak freely instead of something else, they can’t speak freely.  The president is not very good and we need a democratic president.”

George was at the protest with his family and appeared to be around ten years.   He didn’t hesitate to respond about why he was there and said his message was to encourage protesters to wait it out,

“We’re here today because  in Ukraine we want to impeach Yanukovich, the Ukrainian president.  I want to tell Ukraine that it can never give up and it has to stand up for us.  Keep up and never give up.” 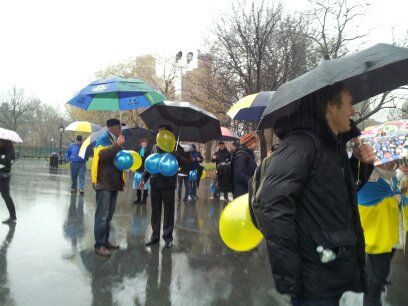 Oskol Chenich was born in New York but his parents were born in Ukraine.  He talked about the human rights abuses that peaceful protesters underwent at the hands of the police,

“My parents are from Ukraine.  I was born here in New York City. I’m with my brethren there in Ukraine that are demanding human rights, freedom of speech, the ability to freely protest peacefully in the country who are demanding to get rid of the corrupt government that currently is in place and to just really to being there with them in spirit because they went through some atrocities.  They were beaten, peaceful protesters, students were beaten over the head, broken skulls.  Everything.  It was horrible.  And the government is the one who ordered that.  And none of them have been punished yet for that.  And a lot of the people who have suffered are still in prison incarcerated for just standing there peacefully.”

But it was the violent response of police against protesters on November 30th that blew criticism into Ukraine from western countries.  Police presence and response has since been limited presumably by the government but it’s not clear if the President is responding to criticism or whether he assumes that the protests will subside.  Others claim that the barricades set up by protesters have kept police at bay.

Chenich was referring to the journalist Tetyana Chornovol who was severely beaten on Christmas Day.  She reported that she suffered a vehicular assault after which she was violently removed from her car and beaten.  In her recent writings she criticized the President for his private residence where thousands have begun to protest.

“So we really are asking the support of the American community and the world community in general to help Ukraine in support of the demonstrations and provide sanctions if possible against the government which is corrupt and has enslaved the people to a certain extent.” 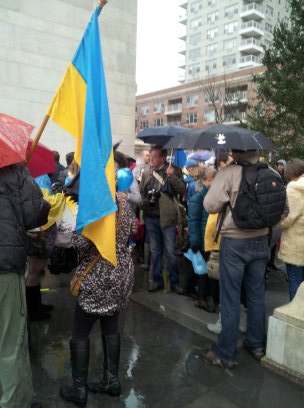 Oleg Nazurski immigrated to the US from Ukraine and talked about government corruption in the country that he left.  He said that people no longer trust the government.  He went on to say that mass media which he suspects is funded by the Russian government, is misrepresenting the will of the people,

“I live in New York since 1999. I came from Ukraine from western part.  We are trying to support all the actions.  We’re trying to support people in Ukraine that manifest their will for Ukraine to join European Union.  As I know it’s not only as some mass media especially which may be financed by Russians, they say it’s only western Ukrainians that want to join European union but I know a lot of people- Ukrainians from eastern Europe which really think that that’s the only way for Ukraine to join the European Union.  Basically this what government did when they promised that Ukraine they do some work over this decision but now they suddenly changed their minds and they turned away to Russia. So it shows that people can’t rely on government.  We all know that the government is very corrupted.  So I think that people think that if they don’t have a real chance to get into the European Union because the European Union forced the Ukrainian government to do some changes within the government.  So they showed their protest to the corruption .  They showed their protest not only to the world for Ukrainian government to lead Ukraine (inaudible) to Russia and Ukraine has many many years fights for their independence from Russia.”

Where Ukraine has been virtually split into an eastern and western divide in culture and language, many say that not only is the perceived split uniting the two divisions but that Ukrainians globally as well as their supporters are now uniting as Ivan affirms, “There are many Ukrainians living throughout the world in Australia, Germany, Iceland, Canada and the US.”  and Mathinou agrees,

“I really do think Ukrainians are coming together.  Honestly, if you really look at it right now there’s revolutions going on all over the world, not [just] in Ukraine .  It’s like such an interesting time in world history that everyone’s fighting for freedom.  Everyone’s fighting for their rights.  It’s about time we’ve actually stood up for ourselves.  We’ve been under the Russian regime for so long and we have the opportunity to leave and our government will not take that opportunity which is actually ridiculous.”

For the dozens of people who stood under a freezing downpour to show their support for the people on the streets of Ukraine, getting soaked was a small price to pay for what they say would be a step towards freedom and justice to build ties with the EU.