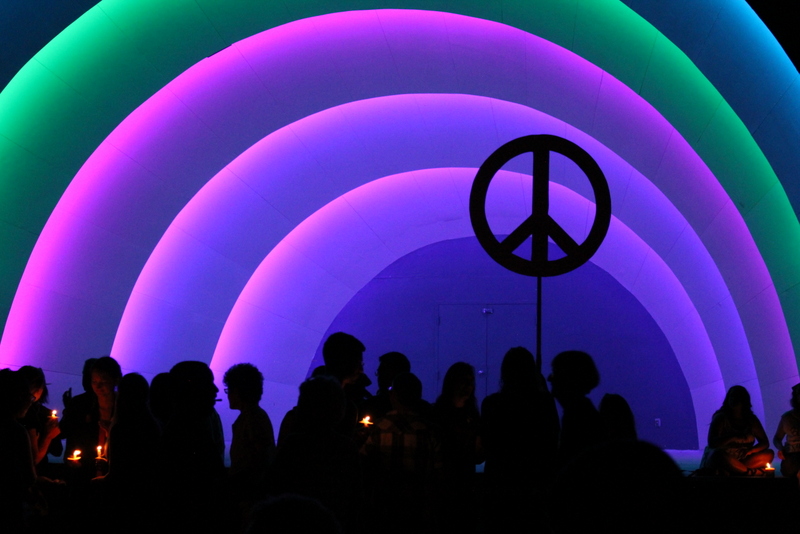 An organizer of a vigil to honor innocent lives taken “over the decades” by police violence said that the Boulder vigil held this evening at the Central Park Bandshell also included grieving with the families of police officers who have been attacked while doing their jobs.  Myrlinda Huff opened talking about the police officers who were attacked Thursday evening, “They were just trying to protect people gathering in the streets.  We grieve with them and their families as well as all officers who have been attacked over the years.”

Protests and vigils have been ongoing throughout the nation in response to the fatal shootings of two African-American men by police this week, both caught on video and widely viewed across the globe.   Tuesday Alton Sterling, 37, was killed by police in Baton Rouge, Louisiana and Philando Castile, 32, was killed in Falcon Heights, Minnesota the next day.

“Most of us have been awakened to this issue by cell phone video recording capturing these individuals’ final moments and were frustrated by the perpetrators,” Huff continued,  “Although caught on camera brutalizing and killing people in cold blood are repeatedly found innocent.  No charges brought against anyone, and we’re tired of this.  Every murderer must be held accountable for their actions regardless of their profession.”

A member of the organization Showing up for Racial Justice (SURJ) said that given that Boulder is mostly white, that particularly the Boulder community had a responsibility to recognize white supremacy, “Thinking about white supremacy and perpetuating white supremacy in our society that’s fueling this violence and justifying it and we definitely have a responsibility [because] we are like 90% white here in Boulder.  A lot of people are liberal but we certainly are not showing that we’re progressive and that we’re willing to really show up and put our bodies on the line for people of color.”

Boulder resident Darren O’Connor who works with the groups Boulder Rights Watch (BRW) and Boulder Coalition and Alliance on Race (BCAR) read a statement outlining myths about the police profession and police shootings, “For those that don’t know, Denver is the second most lethal law enforcement agency in the country.  Remember last year when police chiefs around the country said that police wouldn’t be able to do their jobs with everyone videoing them and that police were being put at greater risk by the Black Lives Matter movement?   Then we learned or should have if we were paying attention, it was a low year for police deaths.  And if we were really paying attention, we learned that police don’t make the top ten list of most dangerous jobs with more garbage collectors and bartenders dying on the job than police officers, the latter of which most die mostly in situations involving vehicular accidents.”

O’Connor referred to a Bureau of Labor Statistics report released on September 17, 2015 that ranked injuries and fatalities in the workforce by profession.

“The system is working just as it’s supposed to.  It’s supposed to serve the wealthy who buy their way out of jail or even criminal charges.  It also serves the police a reward for serving the wealthy.  Our courts and our laws need to show the families that all their lives matter.  Police need to know it from the policies that they work under, to the direction from their supervisors, to the courts that jail them when they fail.”

A counter-protester repeatedly disrupted the vigil defending police with a sign that read, “Blue Lives Matter.”  He was asked to leave but continued yelling out to the crowd, one time saying, “What about the 25 people who were killed in Chicago and Detroit in the last week, don’t their lives matter?”  But a participant to the vigil said, “We are talking about official executions done in our name.  White privilege is a real thing.  White privilege means we don’t even have to think about things that people of color have to think about all the time.”

Kritee who said that she is Asian Indian, a Buddhist, and a scientist spoke about a recent experience she had locally, “Recently I experienced first instance where I felt this was blatantly racist. It was a window for me how much more searing and torturing it can be when it’s institutionalized, when it affects my education, my career, my ability to rent a place or own a place.  I was standing outside a house that we own.  A white woman yelled at me, ‘Why hasn’t homeland security rounded you up by now and you should be wearing orange.’  I felt anger and fear and vulnerability.”

A younger community member who identified herself as Rebecca said that she caught herself falling asleep to what is happening in the country, “I woke up a year or two ago and I started learning these terms ‘white privilege’ and ‘white supremacy’ and ‘institutionalized racism.’  I’m saying we as white people, with our white privilege and our power, we support the Black Lives Movement, and we act.”

The vigil ended with the reading of the names of those killed by police violence over the last two years and began with Alton Sterling, father of five who was known as “the CD man who sold tunes and DVDs outside of the convenience store where he was shot.  Alton was a respected man.  He was beloved in the community.”  CNN anchor Don Lemmon acknowledged in his broadcast on Tuesday that through relatives he knew who Sterling was as he was covering the incident on live broadcast.

An excerpt from a statement released by Philando Castile’s place of employment confirmed that he also was well-respected in his community, “St. Paul Public Schools and its staff grieve the tragic death of a former student and current employee Philando Castile.  He graduated from Central High School in 2001 and had worked for St. Paul Public Schools since he was 19-years old beginning in 2002 in the nutrition services department.  Mr. Castile was promoted to a supervisory position two years ago and was currently working in one of our schools during the summer term.  Colleagues describe him as a team player who maintained great relationships with staff and students alike.”

After a reading of the names of the police officers shot in last night’s protest in Dallas protesting against the police shootings, the names of over 100 victims of police fatal shootings were read.  Darren O’Connor read from his statement, “Violence and loss of life sucks.  The families of the murdered officers in Dallas know this now as well as Sterling and Castille’s families do.  Sadly they were all unnecessary.” 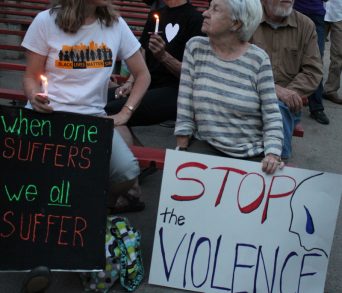 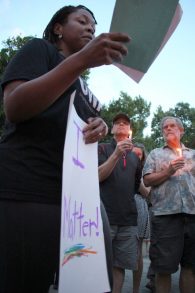 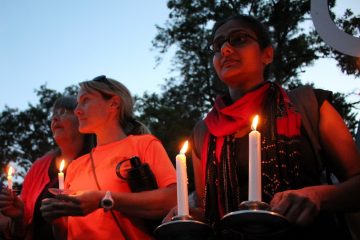 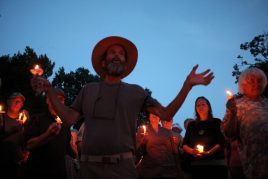 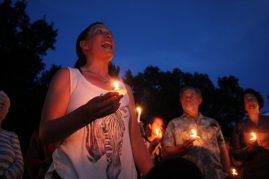 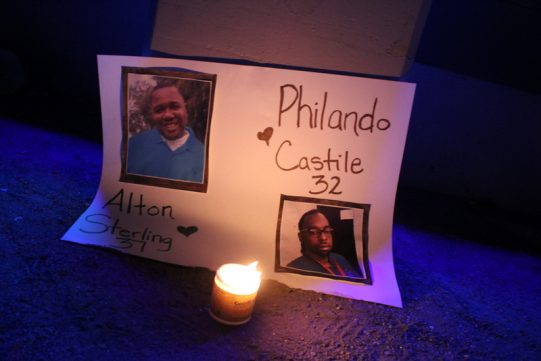