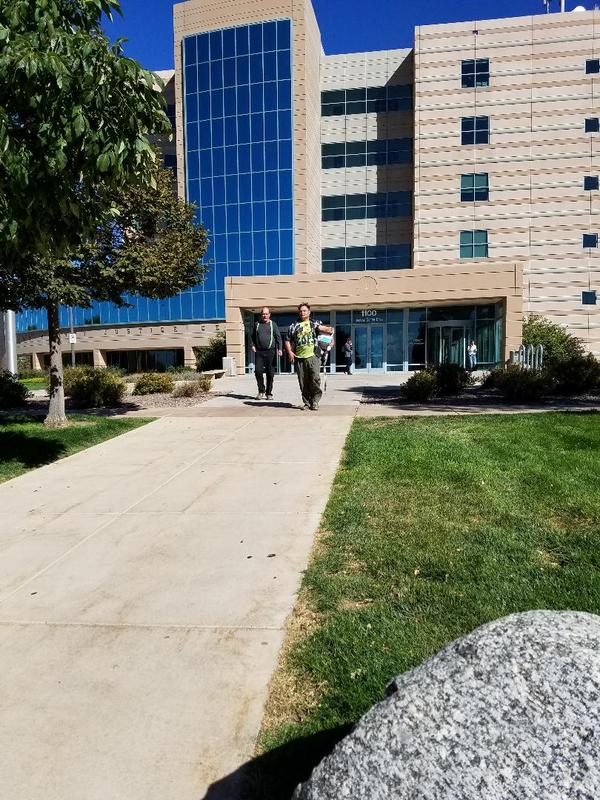 A two-day trial and an hour and a half deliberation, ended in another acquittal of Eric Brandt who had been arrested in Adams County in May of 2016.  He was charged with refusing to leave a public building and disorderly conduct.

Brandt, who had gone to the Adams County Sheriff’s Office Substation on May 13, 2016 to protest what he said were the escalating numbers of arrests of those who were experiencing homelessness in the area of Interstate 76 and Sheridan said in testimony, “Its wrong and it continues to happen.”  His familiar F*CK COPS flag that sometimes draws high fives, and sometimes draws physical attacks on him was in his hands on the day of his arrest.

Brandt, who was the only defense witness said that he had been arrested in the I-76 and Sheridan Avenue area himself.

Prosecution witnesses included four employees of the Adams County Sheriff’s Office including Chief Tim Coats, Commander Kevin Currier, and Detective Leroy Olivas who all were involved in the incident.

Brandt says that he never protests without recording police using multiple recorders because he said that police usually confiscate his equipment as was the case at the time of this arrest.  He founded a nonprofit specifically for the purpose of recording police from multiple pieces of equipment.  He calls the nonprofit “Survive Bad Cops,” and says that when one camera is taken, that at least another stands a chance of documenting incidents.

On the day of this arrest, his cell phone was confiscated and taken into custody.  When retrieved by Brandt, he says the video which his documentation partner had recorded of the incident had been deleted.

Brandt, a specialist in data backup, retrieved the video.

In court the video showed Brandt and his associate outside of the substation waving his signature flag.   At least two officers approached Brandt and began a conversation with him.  Brandt is then heard asking for officer identification which one officer complies with and another does not.  Brandt follows Chief Tim Coates into the building demanding a business card, and swearing at the officer.  A bystander is seen apparently bending over in laughter.

While the prosecution attempted to prove that Brandt refused to leave the building when ordered, Brandt said that without an identification by Chief Coates, he wasn’t sure of the authority of the person in ordering him out of the building.  The video showed Coates saying, “Get out of my building.”

Defense attorney David Allen Chaney in opening statements said that the trial was the result of a retaliatory prosecution on the part of Adams County Sheriffs, “Because they don’t like the content of [Brandt’s] message.”

During jury selection, several jurors expressed offense to Brandt’s message and his delivery.  One juror said that he resented hearing the case, “This is offensive and upsetting and a waste of our time.  Right now there are hurricanes going on and we have a lot more important things to do.”  That juror was dismissed. Another said that her mind was made up before hearing any evidence and was also dismissed.

After the verdict Brandt expressed relief that the video was allowed as evidence, “[Law enforcement] deleted the video.  The district attorney fought and fought and fought to keep that out of the record, and we barely got any of it into the record.  They engage in misconduct as a matter of course and it’s incumbent upon us as citizens to check and balance.  The district attorney didn’t know that I had the recovered video with the audio until today.  So it was today that they found out that they committed perjury.  They’ve testified three times.  Three times in a row they lied, they lied, they lied.  Today they got to hear the audio and see the video that proves that they lied.”

Three jurors spoke to The Nation Report following the verdict.  One juror, whom we have chosen not to name, said that the case went exactly as she thought it would but that the trial was still “interesting and definitely an experience.”  Another said that he felt that “everything was fair and all the facts were considered.”  Another said that she was swayed in favor of the defense after Coates’ testimony, “It kinda irked me [when Coates said] ‘get out of my building.’   Excuse me.  I pay taxes.  That’s my building.  I pay taxes.  You work for me.  And they don’t know that, or they act like they don’t know that.”

When asked for his response to jury selection and the potential jurors who had convicted him before the trial started, Brandt replied, “Free speech and government by the people only works when the people participate and use that speech.  And if we’re going to criminalize that speech, it pretty much doesn’t matter what happens in a hurricane, we’re pretty much sunk anyway.” 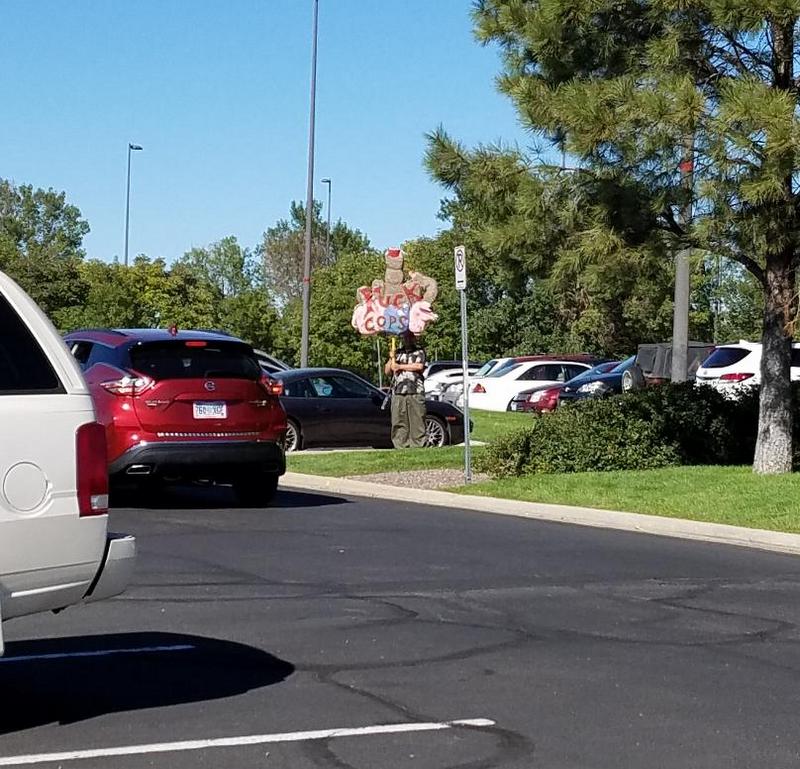 Brandt continues his protest outside of Adams County Courthouse following the verdict.