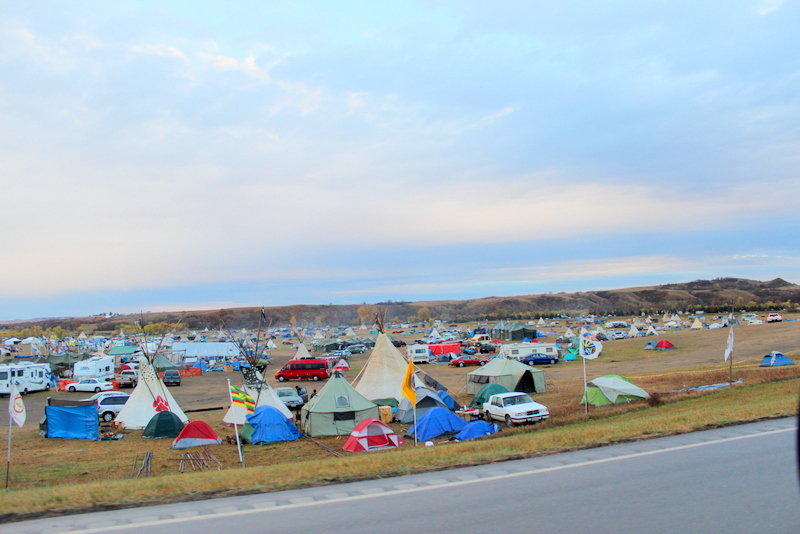 Oceti Sakowin camp as seen in October 2016. (all photos: The Nation Report)

In a joint statement submitted to The Nation Report, the Yankton Sioux Tribe Business and Claims Committee and the Ihanktonwan Treaty Steering Committee have responded to the executive order from North Dakota Governor Jack Dalrymple threatening to evacuate water protectors from their camp on US Army Corp of Engineers’ land.

Since April, those protecting the water of the Missouri River south of Bismarck have camped round-the-clock to a number that has grown into the thousands and has continued despite bitter cold temperatures.  Protectors expect that if the Dakota Access Pipeline construction crosses the river that it will eventually leak.  Governor Dalrymple  is well aware of pipeline spills.  He was in office during a pipeline break in October of 2013 that spilled over 20,000 barrels of oil into a wheat field rendering the farmland infertile.  Since then, under public and media pressure, a reporting site is available to the public but some say they don’t trust that all spills are reported since there is financial motivation to keep spill reports from the public.  The site shows eight spills just within the past week in North Dakota and 71 “incidents” so far this month, one spilling 400 barrels on November 19.  Though most reported spills have involved less than five barrels of spillage, locals make the point that even one barrel of contamination is too much.

The officers and the council of the Yankton Sioux Tribe point to the jurisdiction of the land which, since not state land, is not subject to orders from a state office.  Further, the land is included in the 1851 Fort Laramie Treaty, land of the Sioux Nation-Oceti Sakowin.  The Oceti Sakowin includes seven Sioux tribes.

“The Governor could not be more transparent. Rather than acting in the interest of public safety, as the executive order alleges, the Governor is acting solely for the benefit of Dakota Access.” 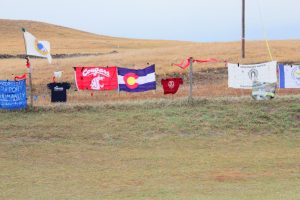 Some of the hundreds of banners and flags of support as hung on fencing bordering Highway 1206 next to the Oceti Sakowin camp.

Those protecting the water have expressed an intention to stay in the camp using whatever First Amendment rights are available to them along with prayer.  Direct-actions as reported by The Nation Report have all begun and ended with prayer.

“They intend to stop construction permanently.  The only thing the Governor aims to do is prevent these water protectors from fulfilling their purpose, to the benefit of the Pipeline company.  If the Governor was truly concerned about public safety, he would be taking actions to ensure more ready access to emergency and medical services for those residing at the encampment, such as clearing the concrete and razor wire barricade law enforcement has constructed to prohibit traffic and block access through North Dakota Highway 1806, rather than restricting the provision of emergency services to that area.”

The Yankton Sioux rebuff Dalrymple’s order rejecting his claim of authority over them and over federal and Treaty land,

The tribe declared to stand in support of water protectors remaining at the camp and to reject what they have expressed is Dalrymple’s feigned concern for safety of the camp residents,

“It is the resolve of the Tribe to stand strong against the Governor’s attempt to use the safety of the water protectors as a means for his true agenda to have the interests of the pipeline trump the interests of the Native peoples of the State of North Dakota. The water protectors have Constitutional and International rights of assembly and protest to protect the land, water and culture. The water protectors are acting in a spiritual manner through prayer and ceremony. The Governor’s veiled attempt to couch his interest in terms of the safety of the water protectors will not work now or ever. The days are gone when the white man can take Indian interests for granted and expect them to stay on their reservations and accept what the white man is willing to give them. The tribes and water protectors understand and realize the value of Unci Maka (“Mother Earth”) and its resources. Consequently, the Governor’s executive order is of no force and effect and will be treated accordingly.”