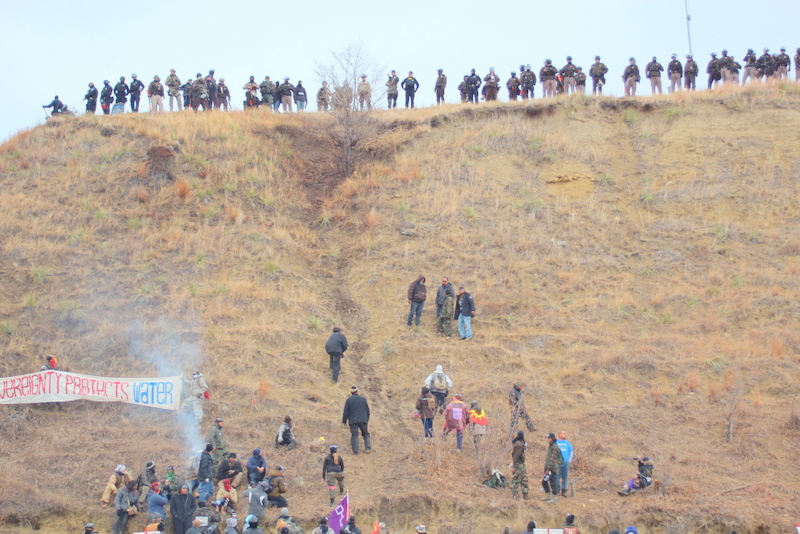 OCETI SAKOWIN CAMP, North Dakota- On Thursday morning at the Oceti Sakowin Resistance camp of water protectors, a message was shared across the camp speaker calling all media and documenters to immediately make their way to Turtle Island, a hill located under a mile from the main camp where indigenous water protectors say many of their ancestors are buried.  Oceti Sakowin, located south of Bismarck, and north of Cannonball, North Dakota is one of the multiple camps that has been in existence since April, and was constructed by those who launched the attempt to end the construction of the Dakota Access Pipeline through the Standing Rock Sioux sacred and ancestral tribal lands.  The $3.8 billion Dakota Access Pipeline project would carry bakken shale oil to Illinois if completed.  The project has been temporarily suspended through permitting process by the US Army Corps of Engineers, but water protectors say that construction continues.

Before last week, water protectors had limited access to Turtle Island from the road that enters off of Highway 1806, the location of a military-style attack on water protectors and has now been blocked by a gate. Dakota Access LLC and Energy Transfer Partners have since instructed police and other law enforcement agencies to build a nearly two-story barricade that has full-time security. All traffic on Highway 1806 is closed to any travelers except for law enforcement and other federal agencies. The Nation Report witnessed at least ten Border Patrol vehicles driving on Highway 1806 in less than a twenty mile distance. 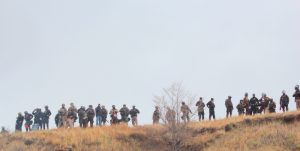 Upon arriving at the shore of the river that circles Turtle Island, about 40 law enforcement agents could be seen positioned and holding rubber bullet guns, large chemical weapons, canisters, including tear gas and pepper spray, water cannons, and AR-15 guns. Water protectors were gathering at the river shore across from the island building a bridge by hand beginning at 5:30 am.   Police destroyed the structure and water protectors continued to re-build the bridge. With 2×4 wood boards, nails, rope, and Styrofoam a 50-foot long bridge was constructed. 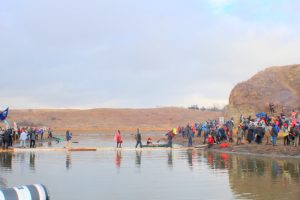 Law enforcement made announcements to the water protectors that constructing the bridge across the river would force the officers to use water cannons or escalate. Claims were continuously coming from the top of Turtle Island where officers annouced, “We do not want a confrontation today, stop building the bridge. If you cross onto the island we will have to consider that a threat and respond accordingly.”

Many water protectors were prepared for violence that had previously been enacted by the police in past actions, but especially the preceding Sunday where hundreds were injured by police, some seriously.  Some wore goggles, and earplugs.  Some wore masks to protect against chemical weapons and stood with wood or plastic shields to protect against rubber bullets or water cannons.  The police announced, “Why are some of you armed in ballistic defense gear? We see that as aggression.”

Water protectors responded, “You have guns! We have prayer!”

Once the bridge was constructed, people began crossing the river onto the base of the Turtle Island. Nearly 500 people crossed the river via three small canoes and the single hand constructed bridge to build two sacred fires where for prayer and ceremony while also expressing that “Thanksgiving is a day of mourning for us.” As the water protectors crossed, the number of law enforcement doubled to over 100, all armed with different types of weapons. Water cannons were used at times towards people who were holding a banner on the hill of Turtle Island that read: “Indigenous Sovereignty Protects Water”. Water from cannons though was sprayed by law enforcement from hoses in an apparent threat to trees and the land near the water protectors.

The stated intention to cross to Turtle Island was the demand that law enforcement not stand on top of the sacred burial site of Indigenous ancestors, and also to encircle the island with people who wanted to share a prayer with their ancestors on what is a sacred day for them.  After almost two hours on the island, water protectors asked law enforcement to remove themselves from atop Turtle Island communicating that the water protectors would then return to camp if the request were honored.

This last week of November brought thousands of water protectors from across the country to Oceti Sakowin camp and it was clear that the law enforcement were very aware of the increased presence of people coming from out of state. As this week ends and many people leave the camp again, violence and repression against water protectors is expected to continue. 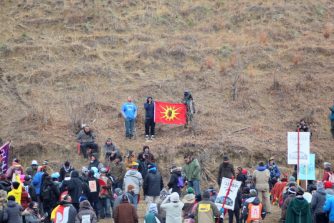 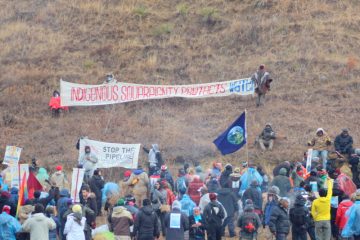 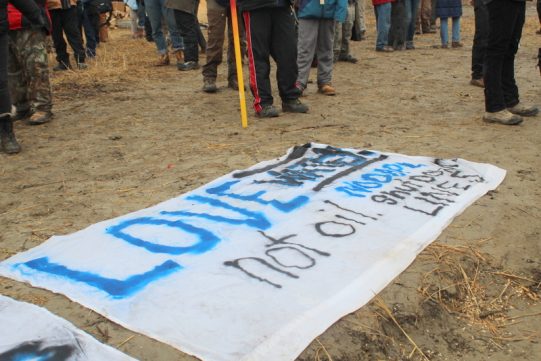