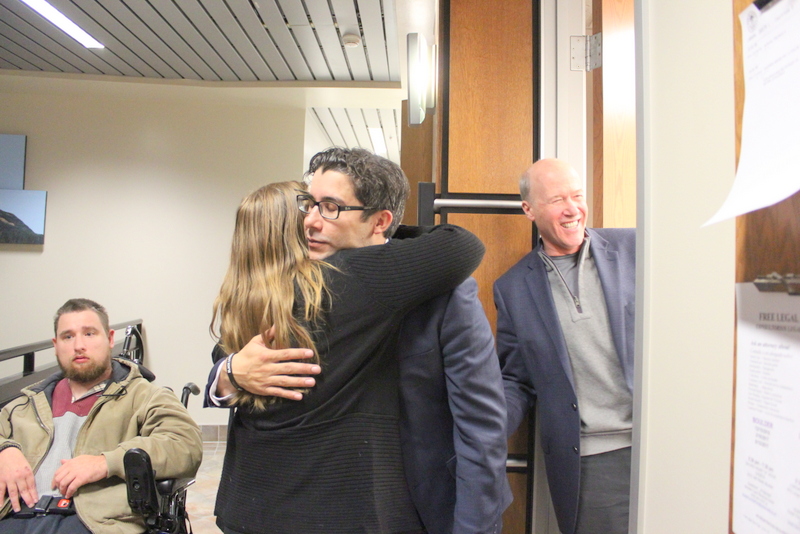 Tom Downs gets a hug from his wife Cynthia Beard after the verdict. His father, also named Tom Downs is pictured at right.

“I hope that the city of Boulder will consider moving the police officer who escalated the violence to a position that is not out on the streets, not endangering further residents and visitors in Boulder.”

A jury deliberated for about eight hours to decide that Thomas Downs did not assault the police officers who were involved in a traffic stop involving himself and his then fiancee on March 27, 2016.

During that stop, officers arrested his fiancee, Cynthia Beard on suspicion of Driving Under the Influence and instructed Downs that he would have to walk home if he could not find someone to drive him home.   According to video footage presented in court, Downs opened the passenger door twice, once he said was to talk to officers, and another to retrieve his keys from the back of the car that he would need to enter his home.

Charges against Beard for DUI were later dropped, but Downs was charged with second and third-degree assault on a police officer, obstruction of a police officer, and resisting arrest.  Video evidence played in court showed Downs exiting the car in which he was a passenger and placing his hands on the hood of the police car parked behind the car in which he was a passenger.  Three police officers grabbed him and within seconds Officer Ryan Austin, a nine-year veteran of the Boulder Police Department yelled twice, “I’m going to tase you!  I’m going to tase you!” as he places a Taser on Downs’ back.

Video evidence shows that Downs was taken by the three officers on the scene to the back of the police car where a struggle ensued.  Body camera footage is scattered but audio footage can be heard where Downs repeats, “I’m not resisting,” after which video footage showed him on the ground with officers holding him down.

Beard, who watched the incident from inside of the police car, said in court that she thought for a brief moment that the taser had been fired or that her fiance “could be dead.”  On the stand she testified to photos taken by her and by police of injuries to Downs.  She identified 14 photos of different injuries including bruising, abrasions, and cuts to his neck.

Prosecution attorneys Nicole Mor and Adrian Van Nice attempted to convince the jury that dirt marks on the pant legs of Officer Zack Hogan were from the shoe print of Downs kicking him, but the jury did not convict Downs on any of the four counts of second and third degree assault on the officers.

In closing arguments defense attorney John Pineau pointed to video footage where he suggests to the jury that the officers seem to be collaborating to arrange a story, the officers say, “By the way he kicked,” instead of being outraged or focused on any injury that the officer later claimed he endured.  That comment was followed by another officer saying, “Yeah, yeah, he was fighting us.”  Pineau also said that Downs could not be found guilty of resisting arrest because there had not been an arrest or communication that officers were arresting, “There’s no resisting arrest if there’s no arrest.”

A jury did find Downs guilty of obstructing and of resisting arrest.  After court Downs responded to the verdict, “I’m extremely disappointed.  I did not resist arrest.  I didn’t obstruct the officers.  The fact that in this society, as a person of color, there’s no way I can interact with the police where I surrender to them.”  In court Downs testified that he put his hands on the hood of the police car so that officers would see his hands in complete view and that the act would be considered an act of surrender, “I put my hands down and they threatened me with tasing.  I’m still being held culpable [and this] speaks to the injustice.  I didn’t receive a fair trial.  I was not allowed to enter video evidence.  This is not justice.  I am ready to appeal this, fight this, for as long as it takes until justice is served.”

District Attorney Stan Garnett told the Boulder Daily Camera in an interview before the trial that he supported video footage being used as evidence to get a complete picture of the issues in question.  The publishing of the article which featured a retired police chief who highly criticized police tactics the night of the arrests was the subject on the first day of the trial when prosecutors moved to continue the trial to a later date.  Judge Judith L. LaBuda denied the prosecution motion and instead screened potential jurors for prejudice.  Four potential jurors of the 32 who were pooled, had seen the article and were excused from serving.

Despite Garnett’s position about supporting juries having access to complete evidence, jurors were disallowed to see videos that were compiled onto one screen that could be played using the video player technology that is used in court.

After the verdict, Beard raised concern about a police officer – Officer Ryan Austin who testified in court that he had, during different incidents, experienced multiple concussions and was out of work for a year with a severe concussion – whom she warned was a danger to the Boulder community, “Officer Austin endangered himself, he endangered his fellow officers, he endangered everyone in the vicinity, and he endangered me.   Pulling a taser out in a rapidly moving situation when it was not called for, regardless of whether or not they want to try to justify it, was a situation that endangered every single person there and that’s part of why I believe that it would be in his best interest for his own personal safety, and for the safety of the entire community including the other officers, for him not to be out in the streets.”